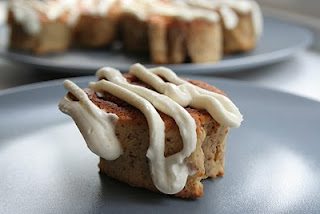 When I was in university, there was, and probably still is, a little hole-in-the-wall coffee shop right by the bus stop where all the campus buses passed. It served really good coffee and lattes but only carried a single food item – cinnamon rolls. To my dying day, I will maintain that these are the best cinnamon rolls on the planet. They were so big that one roll would carry me through both breakfast and lunch, and they were always warm, soft and gooey. The little shop was smart to specialize in just this one food, as they seemingly had managed to perfect the art of the cinnamon roll. They would often run out by midday, and so there was always more demand than supply. It certainly didn’t hurt that they were fairly close to a large university and that these cinnamon rolls were an ideal morning-after cure for a night of drunken debauchery.

I wish I could tell you that the recipe I am about to share rivals the cinnamon rolls of my university days. It does not. It doesn’t even come close. But before I turn you off completely, I will say that for the low carb/gluten free set, these were actually pretty good. Those of us on such restricted diets can’t expect to both enjoy the tasty treats of our past and stay the course. It simply isn’t possible. So do we settle a bit when it comes to taste and texture? Sure. I think we have to. And perhaps it’s not all hardship. There are so many amazing healthy foods out there that some of us are discovering for the first time. It’s odd to think that serious health issues can end up opening new worlds to us, but it does happen.

Back to the cinnamon rolls. I knew I wanted to make some for Father’s Day brunch, but I also knew that I wanted to be able to partake of them. So I set about thinking of how to make them with a mix of coconut flour and almond meal. I could have gone with carbalose flour and/or gluten flour, both of which bake more like regular flour, but I also wanted to see if I could make them gluten free. I myself don’t have any problems with gluten, but there is a correlation between Type 1 diabetes and Celiac disease and I wanted to make this recipe useful to as many on restricted diets as possible. I also decided to go with a non-yeasted roll, since I have had good luck with a conventional recipe that is based more on a biscuit-type dough. I haven’t yet tried my hand at any low carb yeast breads, and I thought that this might be easier and quicker for brunch. I found a number of helpful starting places when I research low carb biscuit recipes, but in the end, the dough, cinnamon filling and the cream cheese icing were all my own creation.

The Results: I’ve already hinted at the fact that these were not the huge, gooey cinnamon rolls of my youth, but I was rather pleased with how these turned out. The most important thing, the flavour, was right on point. Both the cinnamon filling and the icing were exactly right and I wouldn’t change a thing about them. The dough, however, left a little to be desired. Again, taste-wise, it was good, but it only rose a little bit once it was in the oven, leaving me with very small rolls (hence the name Cute Little Cinnamon Rolls). I am not certain how to remedy this and keep them both low carb and gluten free. Coconut flour is extremely dense and sucks up the wet ingredients, requiring a lot of leavener to make it rise. I could have added more eggs, but then I wouldn’t have had a dough I could roll out into proper cinnamon rolls. I intend to keep working at this and if I find the solution, I will let you know. Or if anyone has any tips for me, I’d greatly appreciate it!

Next time, I might make a double batch, or a batch and a half, to be able to make them bigger and more substantial. Mind you, then they would have more carbs. But I might be willing to forego a few other delicacies for a larger, more indulgent cinnamon roll!

For the dough, mix the dry ingredients together in a medium bowl. Add eggs, butter, vanilla and sugar substitute and mix until dough comes together and resembles thick cookie batter.

Roll out dough between sheets of parchment or waxed paper to approximately a 10 x 6 inch rectangle. Peel off top layer of parchment paper.

In a small bowl, mix together filling ingredients until it forms a paste. Spread filling on dough rectangle, leaving about a 1/2 inch border around the outside.

Very carefully, peel one long edge of dough off parchment and roll slowly and carefully, pressing to form a tight log. Cut into 8-10 even pieces and place, cut side down, in prepared pan. Bake 12-14 minutes or until filling bubbles out slightly and rolls are golden brown.

Let cool in pan for 5 minutes, then loosen gently with a knife or metal spatula. Flip out onto a dinner plate and let cool further.

Meanwhile, mix cream cheese, cream and stevia extract. Place in piping bag* to pipe over rolls or simply spread directly on with a knife.

*I simply used a ziploc bag, put in all the icing, and then cut off the tip to pipe the icing over the buns.

Serves 8-10. Total carbs is approx 9g per serving (depending on how big rolls are cut). Approx 2g carbs per serving if you subtract fiber and erythritol.