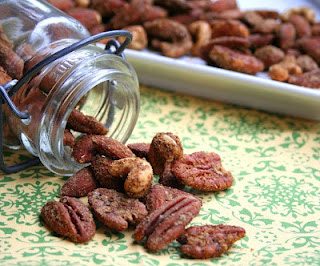 Sometimes the simplest ideas are the best ideas.  This is a truism, a fact so self-evident that it hardly needs to be mentioned.  We all know this to be the case.  And yet…and yet…if you are at all like me, this is a truism that is often forgotten, despite being glaringly obvious.  I can all too easily pass right over the simplest ideas, the ones right under my nose, the ones jumping up and down, hands in the air, shouting “Pick me, pick me!”.  Instead, I might favour the complicated idea, the one with many elements, the one I had to do mental gymnastics to arrive at, in the erroneous assumption that it will somehow end in a better result.  This is a very easy trap to fall into, especially when it comes to cooking and baking.   I call this the Cooking Show Complex.  Who among us doesn’t like to imagine we are the next big thing, the winner of some cooking-contest show where our ever-more elaborate creations constantly impressed the arrogant, taciturn judges?

But it doesn’t take much to knock me back into reality.  Simple is often better and I love it when I happen upon a simple idea from a blogging friend and it inspires me.  The benefits of this are two-fold.  First, it reminds me to get back to basics and enjoy food with the simple flavours I love.  Secondly, it takes the pressure off a bit when creating recipes for this blog.  Oh, that’s right!  I don’t have to spend hours in the kitchen just to share a recipe with you.  As long as it’s good, as long as the flavours come together the way I think they should in my head, simple can be just right. 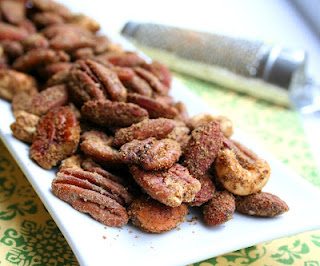 This particular recipe was inspired by Dinners, Dishes and Desserts.  I saw her Indian-Spiced Nuts and knew I had to make something like them so I bookmarked the page.  A month or so later, when I had a hankering for a flavourful snack, I thought of them.  Erin’s version is simple enough for a quick snack, but I decided to take the simple factor one step further.  Since I am a garam masala addict, I wondered if I could simply toss them with garam masala and a little butter before roasting.  Now, one could argue that since garam masala is a mix of many different spices, this isn’t such an simple recipe after all.  But, in the name of simplicity, you purists are going to have to forgive me because I just went with the garam masala spice mix that I can purchase at my local Asian market.  Nothing simpler than that. 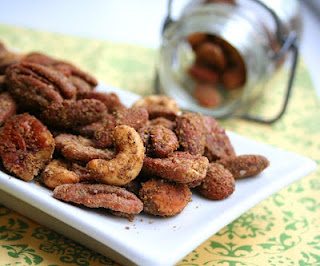 The Results:  Okay, so I really am a garam masala addict and I might be a little biased.  But by God these were good.  They made my house smell like an Indian restaurant, which is always a good thing.  And the nuts were to tempting, I kept eating them while they were still too hot, causing them to sizzle against the moisture on my teeth.  Once they’d cooled a bit, it was game on.  I kept nibbling a few every time I passed the pan.  My only regret here?  That so much of the spice falls off during the roasting process.  You do end up having to put quite a bit on to really get the flavour, but all that lovely spice on the parchment afterwards made me want to lick it.  Or pick up the parchment and funnel it straight into my mouth.  I have issues.

All of the nuts were good with the garam masala, but my favourite was the pecans.  There is just something about that bit of sweetness from a pecan that matures and intensifies when roasted, that pairs so beautifully with the spices in garam masala.

Preheat the oven to 350F and line a large, rimmed baking sheet with parchment paper.

In a large bowl, stir nuts and melted butter together until nuts well coated.  Stir in garam masala and salt and toss until well coated with spice.

Spread in a single layer on prepared baking pan and roast for 10 to 12 minutes, stirring occasionally, until lightly browned and fragrant.

Cool on pan.  Store in an airtight container.