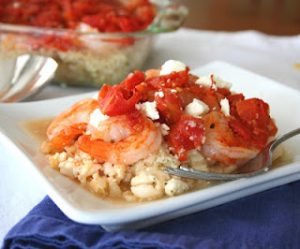 There are a lot of great recipes out there in the world, but every so often, one comes along and knocks your socks off.  You think it sounds pretty good on paper, you make sure you have all the ingredients, and you start cooking.  You smell the lovely smells emanating from your kitchen, your fingers are crossed that it tastes as good as it smells.  You sit down and take a bit, and you sigh with pleasure.  Yup, this is it.  This one is a keeper, one that is destined to go into rotation as a standard favourite.  Bonus points if it’s easy enough to throw together on a weeknight.  Double bonus points if it’s good enough to serve to company on a special occasion.  This, my friends, is such a recipe.  Or rather, this is my low carb, gluten free adaptation of such a recipe.

I found the original recipe years ago on Epicurious, and it instantly became a family favourite.  It fit all the requirements…easy enough to put together in a pinch, as long as I had the ingredients on hand, but also special enough to serve to friends and family as a special dish.  I made it countless times and got to the point where I barely needed to consult the printed recipe.  And then I didn’t make it for several years, until the other day.  The original recipe has a base of orzo, which obviously is no longer an option for me.  But that isn’t the reason I put the recipe away for a while.  The real reason is that I had an “incident” after eating it last time…I must have had an incipient stomach flu, because I awoke in the night and was violently ill for a good 24 hours.  The rest of the family was fine, so I was the only person who was so affected.  And I simply could not bear the thought of making or eating this beloved recipe.

But we were having friends over this past weekend, and I wanted an easy, delicious dish to serve.  I must have gotten over my aversion to this meal somewhere along the way, because it popped into my head as the perfect thing.  Or rather, the perfect thing to serve my guests.  But what was I going to eat?  I could have just made some of the extra shrimp and tomato topping for myself and just had that.  But I decided to take a stab at making it over “rice”, to make a full meal out of it.  So I made two versions, one with orzo and one with cauliflower “rice” (which is really just cauliflower shredded finely to resemble rice). 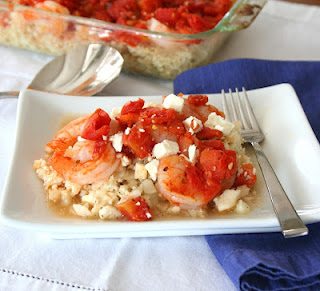 The Results:  I am thrilled to tell you that not only was I very much over my aversion to shrimp baked with feta, tomatoes and white wine, but that the low carb version came out beautifully.  I had to modify the recipe quite a bit to account for the much higher moisture content in cauliflower compared to orzo, and I still ended up with a bit of liquid at the bottom of the baking dish.  But simply using a slotted spoon to scoop up the shrimpy goodness helped with that.  The nice part is that the flavours of the shrimp/tomato topping tend to dominate, so you really don’t taste cauliflower at all.  I love cauliflower, personally, but I liked that this dish tasted pretty much the way the original, high carb version does.

All in all, a success that I am more than happy to share with my readers. 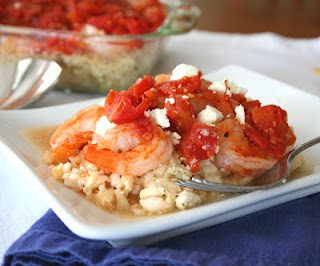 For the cauliflower rice, cut cauliflower into 1-inch florets.  Place half in food processor and pulse until it resembles rice grains.  Transfer to a large micro-wave safe bowl and repeat with remaining cauliflower florets.

Cover bowl with a tight-fitting lid or plastic wrap and microwave on high for 5 minutes.  Let sit 5 to 10 minutes, still covered, to continue to steam.

Heat oven to 350F and lightly oil an 11×7 inch glass or ceramic baking dish.  Drain cauliflower in a colander to remove any moisture, then return to bowl and toss with olive oil, crumbled feta, grated parmesan and chopped basil.  Spread mixture evenly in prepared baking dish and set aside.

For the shrimp, heat oil in large skillet over medium-high heat until shimmering but not smoking.  Add garlic and saute until fragrant, about 30 seconds.  Add shrimp and saute until just barely not pink, about 1 minute  (it will continue to cook in oven).  Arrange shrimp over cauliflower rice and set aside.

Add white wine to skillet and cook until reduced to a few tablespoons.  Add drained tomatoes, red pepper flakes, and salt and pepper and cook until sauce thickens, about 2 minutes.  Pour sauce over shrimp and place baking dish in oven.  Bake 10 minutes.