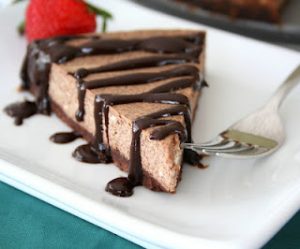 Once upon a time, I used to say that I didn’t really like cake.  And by cake, I meant the traditional sort of sponge cake with piles of frosting.  I’d simply had too many of those out-of-a-box-with-canned-icing type cakes and they were virtually flavourless, except for being so sweet as to make my teeth ache.  My husband caught on to this fact early on and proceeded to buy me a succession of ice cream cakes to celebrate birthdays and other major milestones.  Since that time, I’ve discovered the joys of a good, moist homemade spongecake with rich homemade buttercream frosting.  But I still have a strong penchant for other kinds of cake…cheesecake in particular.  Cheesecake is never too dry, never too crumbly.  It can be a little too sweet sometimes, but with care, cheesecake can be just the right amount of sweet while still maintaining that delightful tang of the cream cheese.  And the choices of flavours and flavour combinations are virtually limiteless.  You can see why it’s a beloved kind of cake for me.

And thankfully, cheesecake is easily made low carb.  Obviously the traditional graham cracker or cookie crust has to go, but that’s easily replaced with a little nut flour, sweetener and butter.  In fact, I daresay that you would have a hard time knowing the difference, if I didn’t tell you.  The filling part is very much the same as with any cheesecake – cream cheese, eggs and your sweetener of choice.  The toughest part is deciding what flavour of cheesecake you want to make! 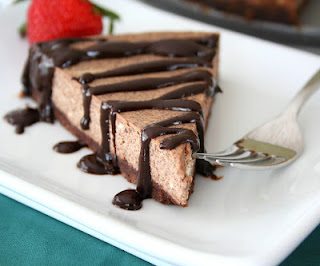 I found myself in the mood for something rich and gooey over the weekend.  I declared to my husband that I was going to make some sort of cheesecake, I just didn’t know what yet.  But I knew I wanted it to have a drizzly chocolate sauce, the sort that makes you want to run each bite around your plate to get every little drop.  But not plain chocolate, not this time.  And not chocolate peanut butter either, because I am saving that heavenly combo for my birthday (oh yes, stay tuned for that.  I haven’t even made it yet and I know it’s going to be good).  Coffee is always a good bet when it comes to chocolate.  So is alcohol.  Better yet, coffee AND alcohol!   So coffee liqueur was the next logical step.

The Results: There is simply no way this could NOT be good.  Cheesecake?  Good.  Kahlua?  Good.  Gooey chocolate sauce?  Goooooooood!  So yes, it was good.  Very good.  My only very minor issue as follows:  unsweetened chocolate is finicky to work with and doesn’t blend well with other ingredients.  I know this, and that’s why I added it to the filling last, very slowly while my stand-mixer was running, in an attempt to beat it in smoothly.  I still ended up with a somewhat flecked appearance to my cheesecake, but that hardly made a difference to the taste.  However, I might consider leaving the chocolate out of the batter next time altogether, as I really did want a coffee/Kahlua flavour to the cake, and have the chocolate contained in the sauce.  Either way, however, it’s still really good. 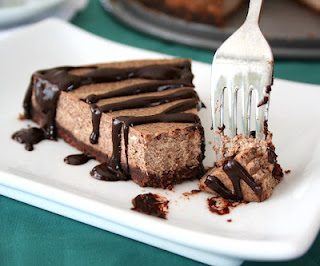 In a 9-inch spring-form pan, whisk together almond flour, cocoa powder, and erythritol.  Stir in melted butter until dough begins to clump together.  Press evenly into the bottom of the pan and bake 10 minutes.  Remove and let cool.

In a small bowl, whisk together instant coffee and hot water until coffee dissolves.  Set aside.

In a small saucepan, melt butter and unsweetened chocolate together over low heat, stirring until smooth.  Set aside.

In a large bowl, beat cream cheese until smooth.  Beat in eggs, one at a time, until well combined, then beat in erythritol, Kahlua, vanilla and stevia extract, scraping down beaters and sides of bowl as needed.  Beat in coffee/water mixture.

Slowly add melted chocolate while continuing to beat, until fully combined.  Give the batter a final stir with a rubber spatula to make sure it is fully mixed.

Taking care not to disturb cooled crust, brush sides of spring-form pan with melted butter.  Pour filling over cooled crust and bake until set, about 40 minutes.  Remove and let cool, then wrap tightly in plastic wrap and refrigerate for several hours.