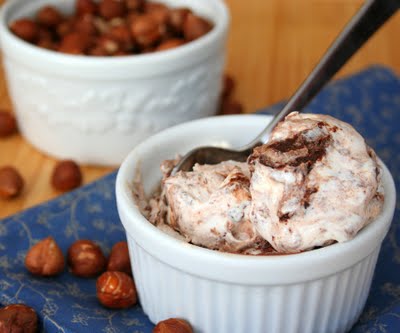 I’m convinced that Nutella should come with a warning label, something along the lines of “Can become addictive if consumed too frequently”. Really, this unassuming chocolate-hazelnut spread is naughty, naughty stuff. I have seen many a food blogger come under its thrall and be so utterly obsessed with it that they can’t seem to make a recipe without it. They have that crazed, Nutella-glazed look in their eye, and they cannot help themselves as they reach for the jar and add it to every bowl of cookie dough or brownie batter. They get wild with despair should you even mildly hint that they make or eat something other than Nutella. It really ought to be a controlled substance, doled out only in small doses to those bloggers who have shown they can handle it.

Obviously I jest, but Nutella really does play a prominent role in the foodblogging world. There is rarely a day that goes by where I don’t come across at least one or two recipes featuring it. For my part, I have always loved the combination of hazelnuts and chocolate, but I was never really that much of a Nutella fan. I didn’t dislike it, but I didn’t go out of my way to consume it either. Until I was pregnant with my first child, when my one and only food craving was for Nutella. I proceeded to buy a jar, eat about a third of it to satisfy my craving, and then let it sit on my pantry shelf for close to a year. Strange, but true. 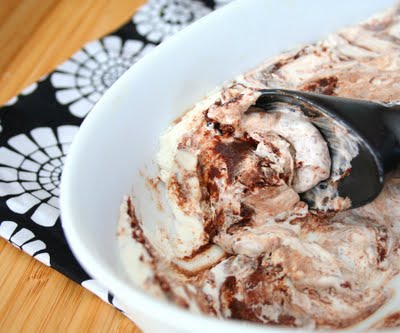 I started making my own version of the nut spread after realizing I had diabetes. I don’t make it all that often, but every few months my mind wanders to the idea of it, and I have to make some. Often it is for inclusion in a recipe, such as this one or my Chocolate Hazelnut Crunch Cake. Sometimes, it’s just to have something other than peanut butter to spoon out of the jar and straight into my mouth. Whatever the reason, when I find I have homemade nutella on the brain, I have to get cracking and toast up some hazelnuts to satisfy the urge.

I’ve been thinking of swirling it into low carb ice cream for a while now. I’ve also been thinking of baking it into cheesecake. So when I saw a recipe for Cheesecake Ice Cream on Diethood, the leap to Nutella Swirl Cheesecake Ice Cream came pretty easily. I set about making my nutella – I made extra, so I could still spoon it into my mouth straight out of the jar. Then I made my cheesecake ice cream base, following Kate’s recipe but with my alternative sweeteners. I also found at the last minute that I had no sour cream, so I subbed in greek yogurt. Once the ice cream was churned, I swirled in about a half cup of nutella, put it in the freezer and waited for it to firm up. 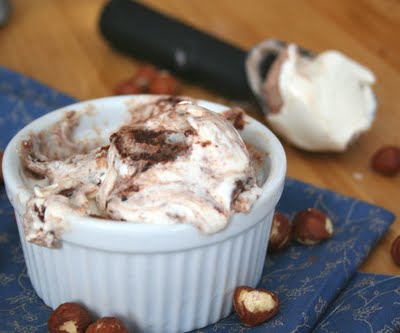 The Results Cheesecake ice cream really is a wonderful treat. It has a wonderful creaminess and really does taste like a frozen version of cheesecake. And adding in nutella? Well, not to toot my own horn or anything, but I think that was rather inspired! (Toot toot). Lovely swirls of chocolate hazelnut goodness are welcome in almost any dessert, but it’s a great complement to the tangy cheesecake flavour. 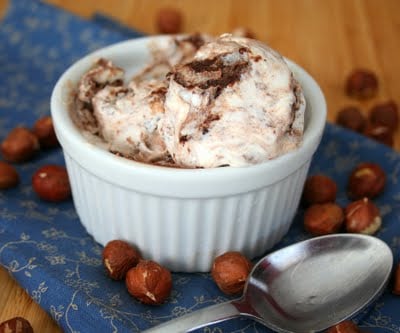 I made a double batch of the nutella, to have some just to eat on it’s own!

For the ice cream, cut the cream cheese into pieces and place in a food processor (yes, you are going to have to wash it out from the nutella!). Add yogurt, whipping cream and erythritol and process until smooth. Add in vanilla, stevia and salt and process until combined.

Refrigerate ice cream mixture until well chilled, about 2 hours. Transfer to an ice cream maker and churn according to manufacturer’s directions. Once churned, transfer to an air-tight container and swirl in nutella. Place plastic wrap flush to the surface of the ice cream and freeze until firm but not rock hard, about 1 hour.