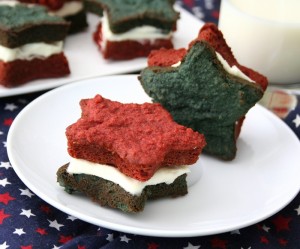 Americans come up with best names for their sweets and treats. Think about it. Snickerdoodles. Ding Dongs. Whoopie Pies. Let’s face it, those words are as much fun to say as the food is to eat. Although I’ve never had a ding dong and I am not about to start now. And the first time I had a whoopie pie, I didn’t think all that much of it. In fact, I found the name far more appealing than the actual food. That may have more to do with the company that was catering our annual retreat than with whoopie pies in general, but being an ignorant Canuck, I wrote whoopie pies off as rather uninteresting. Ho hum, cakey chocolate cookies with flavourless vanilla cream in the middle. Then I became a food blogger and discovered a vast world of interesting whoopie pie flavours, and I realized that they might have some street cred after all. Coming up with a low carb, gluten free whoopie pie has been on my to-do list for a long time, and being invited to be a part of Creative a Festive Fourth With Wilton Giveaway was just the motivation I needed.

Let me tell you a little about this awesome giveaway. Because it’s awesome. It’s awesomer than awesome. First of all, you have a chance to win the Star Whoopie Pie Pan that I made these with. You will also win the Non-stick Stackable Cooling Grid, an Icing Smoother, Patriotic Sprinkle Mix and Disposable Decorating bags. You can see the kit and kaboodle in the image below. But that’s not all. There are four other bloggers doing similar giveaways, each with a specialized Wilton baking pan. You can enter each of our giveaways for five chances to win.

If you are serious about your baking, chances are you already own some Wilton bakeware. I have to say that it’s my favourite by far. I always regret it when I’ve bought a cheaper pan that isn’t as non-stick or browns my baked goods too quickly (or not quickly enough!). Any time I need to replace a pan now, I buy Wilton. And I am only just barely getting into cookie and cake-decorating, but they do have the best accessories. I just might have a bit of an addiction to pretty cupcake liners and piping tips. And my addiction is mild compared to some bakers I know!

As for the Whoopie Pies I made, well you can see for yourself that I can’t really call them red, white and blue. Turns out that true blue is REALLY hard to achieve when you are working with almond flour batter. But I love them anyway. The dusty teal and muted red remind me of nothing so much as what you might see on old wooden Americana artifacts. To me it brings up images of the Stars and Stripes painted on wood and then faded by years in the sun. And I can foresee many uses for the Star Whoopie Pie Pan. I’ve already promised my kids to bake up some star-shaped brownies in it! 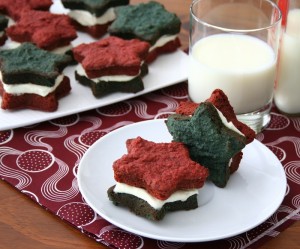 The colours might not be as patriotic as I would like, but the flavour and texture of these whoopie pies is spot on. Technically, I suppose these would be Red Velvet Whoopies, as I added a bit of cocoa powder to the mix to keep the colour from being too luridly red or blue. And the frosting is cream-cheese based and holds up well to the cake. These were a huge hit with my kids, both in appearance and in taste. And they sure were fun to make! 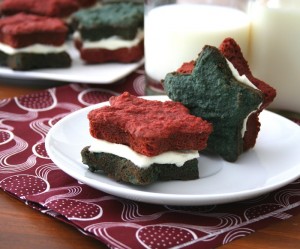 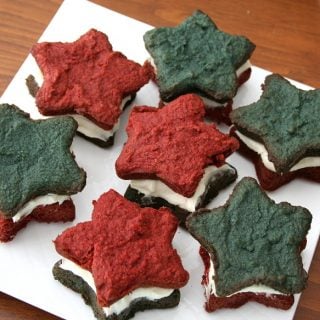 A few foodie friends that I met at Camp Blogaway are also participating in the Create a Festive 4th with Wilton event too! Won’t you stop by and check out their tasty creations and enter their giveaways! 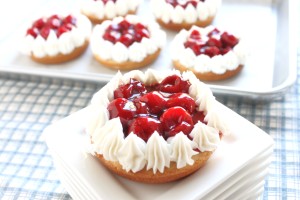 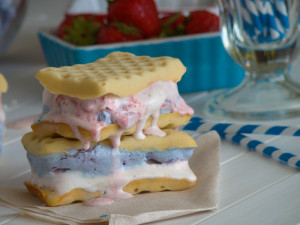 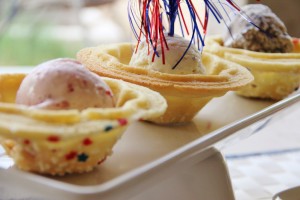 Around My Family Table’s Festive Ice Cream and Cookie Bowls 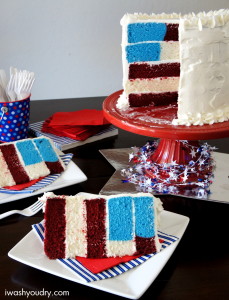 I Wash…You Dry’s All American Cake