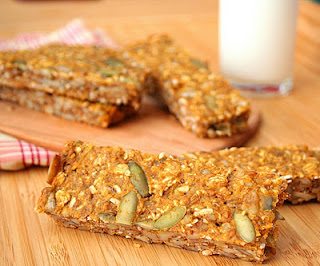 I think I’ve mentioned before that I find no end of inspiration from my fellow bloggers when it comes to cooking and baking. I still love a good cookbook or cooking magazine, thumbing through it in the comfort of a big chair and wondering what I want to make next. And lucky me, I happen to keep winning new cookbooks from giveaways on other people’s blogs! But blogs really do provide me with much of my inspiration and there are a few blogs I keep returning to, again and again. I’ve mentioned Roxana’s blog, A Little Bit of Everything, a number of times, and I am about to do it again right now. Because this recipe, although very much modified to suit my own tastes and needs, was once again inspired by her.

I’d seen her Dried Fruits and Seeds Bars back in June and they immediately caught my attention. I’ve always loved snacking on granola bars and these seemed similar but even healthier, sweetened only by applesauce and full of nutrition. Sadly, even as healthy as they were, they wouldn’t have been kind to my blood sugars. But the idea of them stayed on my mind for weeks, even months. I kept wondering how I might modify them into a diabetic-friendly snack. The applesauce and the dried fruits were a problem because they would add a lot of additional carbs that my body wouldn’t tolerate. What to do, what to do? 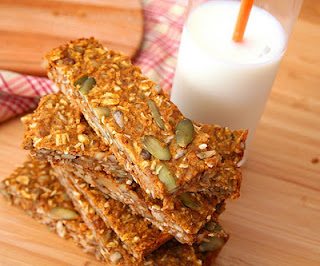 The end of the summer came so quickly and with September came the hunt for canned pumpkin. It wasn’t easy to find, so when I had some leftover from my Pumpkin Cardamom Bread, I couldn’t just let the precious stuff go to waste. And that’s when it occurred to me to use pumpkin in place of the applesauce, and make a fall-oriented version of Roxana’s bars. I skipped the raisins and currants and added in chopped nuts instead. I did have ground chia seed on hand, but I decided to go with some lovely roasted flax seeds from Trader Joe’s instead. The flour was replaced with almond flour, naturally. I added a much smaller portion of oats – I wanted some in there for texture, but I didn’t want to add too many carbs. I did a smaller batch than she did, to see how they would turn out. And of course, I added the typical spices that go with pumpkin at this time of year. 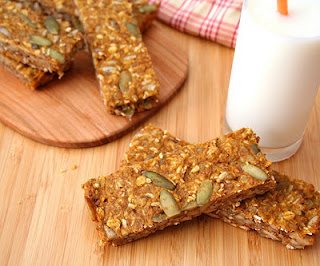 The Results: I was really at a loss of what to call these bars, as they aren’t granola bars in the regular sense of the word. But they are somewhat similar. They have a softer texture and aren’t as chewy, but if you are looking for a low carb snack bar, this is a pretty good bet. I loved the fall flavours in this, the pumpkin combined with the cinnamon, ginger and cloves. However, I do think that they weren’t really sweet enough. Roxana’s recipe had no sugar or sweetener, but would have been naturally sweet from the applesauce and dried fruit. I put in a little erythritol and stevia to compensate, but it wasn’t quite enough. Pumpkin just doesn’t have enough natural sweetness on its own. So I have written up the recipe to reflect a little more sweetener, which I think would help.

I will say, these were an excellent breakfast with a smear of peanut butter on top. Peanut butter and pumpkin go surprisingly well together! 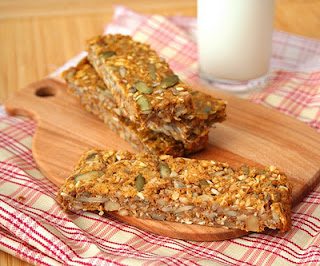 Preheat oven to 400F and line an 8×8 inch pan with foil. Butter or grease the foil.

In a large bowl, combine all ingredient and stir together until well incorporated. Spread in prepared pan. Line top with plastic wrap or parchment paper and press firmly and evenly into pan with the bottom of a glass or flat-bottomed measuring cup. Peel away plastic or parchment.

Bake 20 minutes, until center is firm and edges are golden brown. Let cool in pan and then cut into 12 bars.