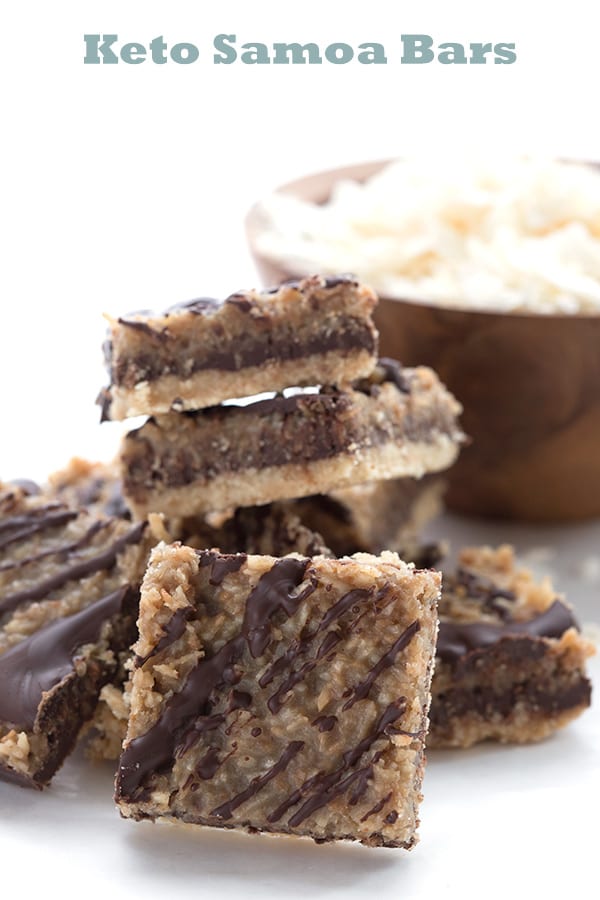 This Samoa Bar recipe was first published in 2011. Whoa, dudes, that’s a long time ago now. So they are deserving of an update, and are now lower carb. And prettier photos too!

Good old Samoa cookies. What do they call them now? Caramel Delites or some such silliness. Okay, much more politically correct and all that jazz, but practically no one know what you are talking about. However, if you say Samoa Cookies, everyone knows exactly what you mean.

So I am calling this recipe Samoa Cookie Bars. It’s got better name recognition and it rolls of the tongue much more easily. That’s my story and I’m sticking to it. 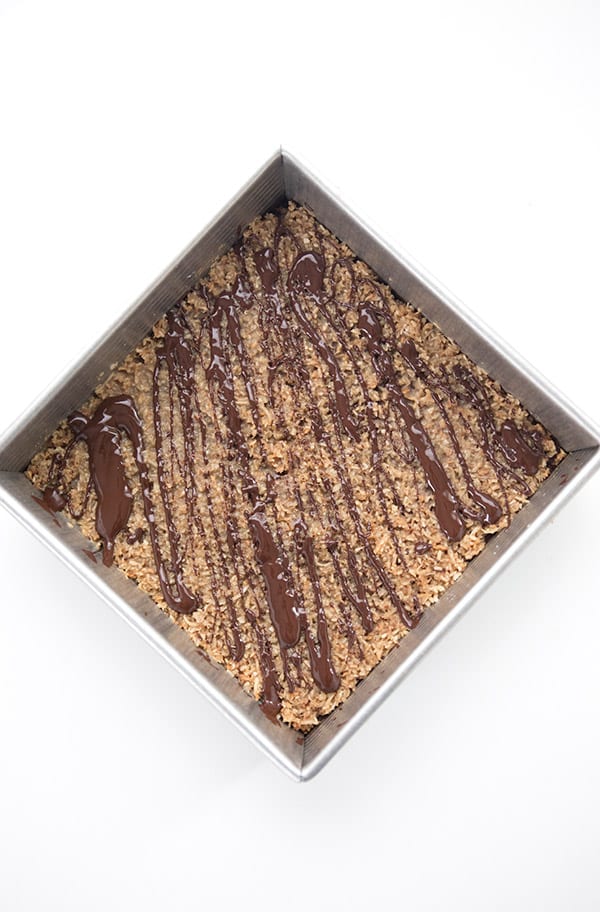 Now, I could have made these as low carb cookies instead of bars. But let’s examine that a little more closely. The original Samoa cookie is a circular shortbread cookie with a topping of coconut and caramel. The bottom is then dipped in chocolate and more chocolate is drizzled overtop.

That’s a lot of work, my friends!

Rolling out the dough, cutting it out into circles, cutting out a hole in the middle, and then trying to top those delicate cookies with the caramel and dip them in chocolate?

Tasty and pretty, I am sure. But far too laborious for my taste.

Taking all those same elements and turning them into bars is far easier and you get the deliciousness into your mouth that much fast. Win win, I would say. 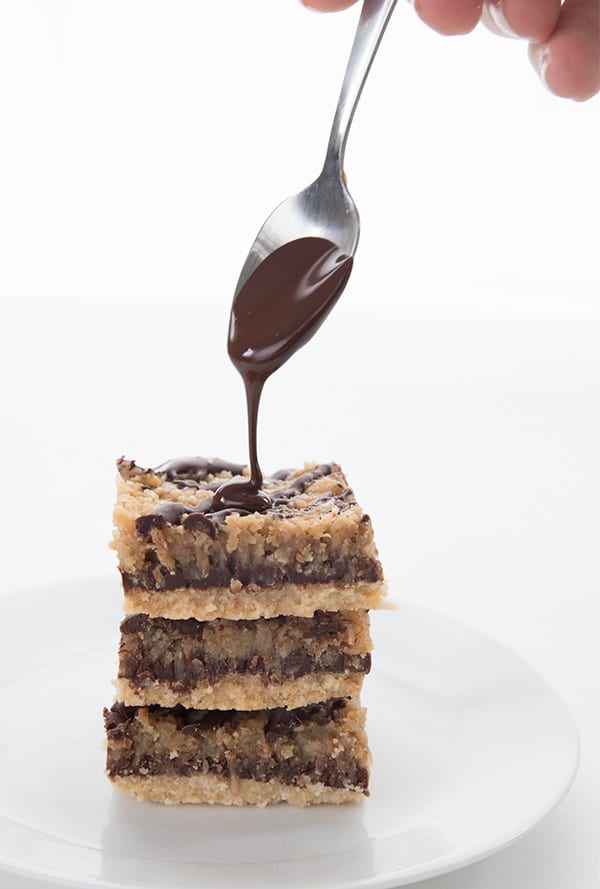 Way back when I first created this Keto Samoa Bar recipe, I thought I was being pretty darn original. I wanted that delicious coconut caramel flavor with a shortbread crust and I realized quickly that a bar cookie would be far less work.

Then I did a Pinterest search and I quickly realized that many others have hit upon this same idea. Great minds, right???

But while I may lack in coming up with completely original ideas, I make up for it by taking those ideas and making them keto friendly. As far as I can tell, this is the very first low carb Samoa Cookie Recipe. There are certainly more now, but my samoa bars were the first of their kind!

Does that win me any awards? Maybe in my own mind.

Obviously a lot has to change to make Samoa cookies low carb and sugar-free.

The Shortbread Base: I’ve made a fair bit of low carb shortbread in my day and almond flour makes the best crust by far. When it’s baked with butter, sweetener, and salt, it becomes both tender and crisp, just like conventional shortbread. The crust on these Samoa Bars is my favourite and I’ve used it over and over in many recipes. 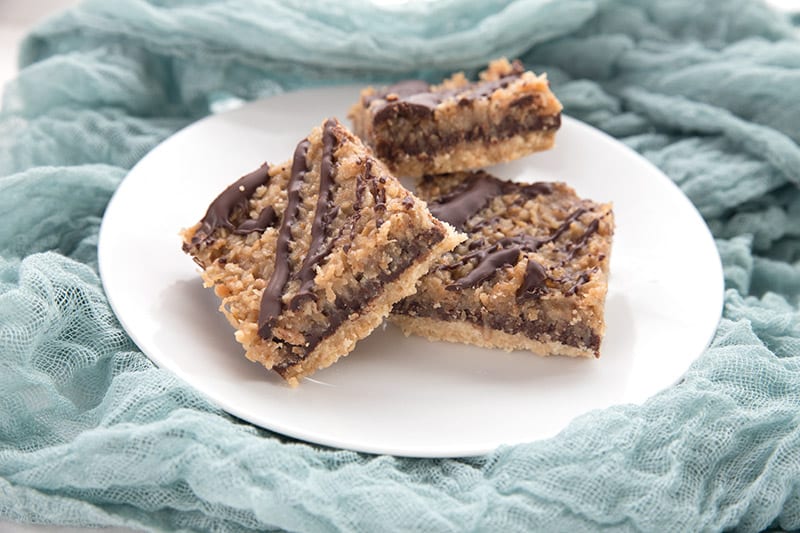 The Chocolate Dip and Drizzle: To make things even easier in this recipe, I decided to do a layer of chocolate on top of the crust. Real Samoa Cookies have bottoms that are dipped in chocolate. But that would mean cutting up the bars after they were finished and carefully dipping them. It would be far messier too.

Would your tastebuds really know the difference between a layered Samoa Bar versus a dipped Samoa Bar? I think  not.

So I simply poured about two thirds of the chocolate mixture over the cooled crust, before topping it with the coconut caramel.

The Coconut Filling: Samoa Cookies are now called Caramel De-Lites because of that delicious coconut caramel topping. I’ve got one of the best sugar free caramel sauce recipes and it’s perfect for these bars. Stir in some toasted coconut and spread it over top, and drizzle on a bit more chocolate.

So if you’ve been missing Girl Scout Cookies on your low carb diet, try this easy recipe. You won’t regret it. 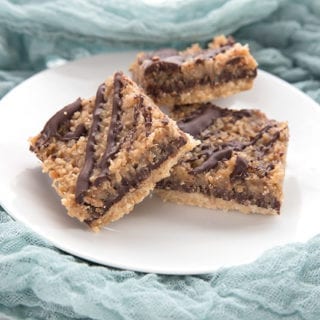 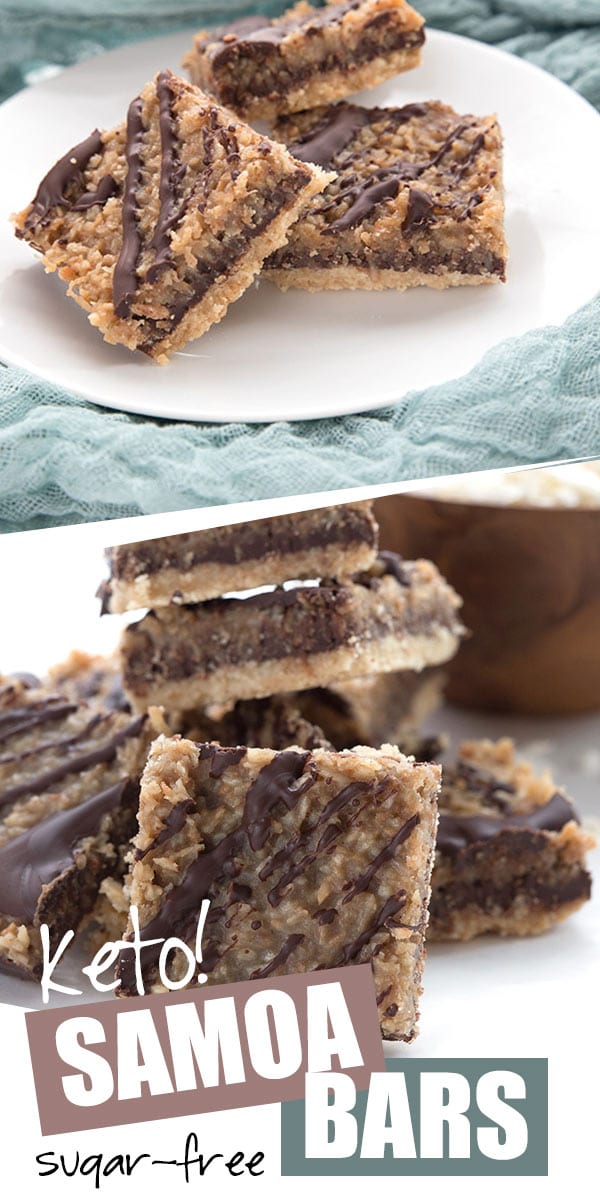