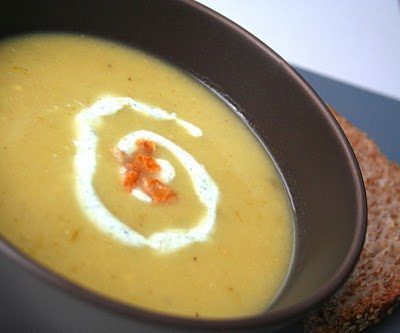 Oh my goodness, do I have a recipe for you! I just finished a bowl of the most delicious soup and I can’t wait to share it. And the best part is that it uses up a whole lot of an ingredient I just didn’t know what to do with. If you’ve been paying attention (Have you? There may be a quiz at the end!), you might remember that our garden was not such a success this year. I don’t know if it was the lack of rain this summer or what, but we mostly got a whole lotta nothin’. We were, however, practically drowning in a few items, such as basil and tomatoes. But the tomatoes, although plentiful, have for the most part remained as green as a shamrock. To my bitter dismay.

Fortunately, I have a resilient nature and so I decided that I needed to make the best of what I had on hand. There was the obvious choice of fried green tomatoes, but a google search turned up quite a number of other possibilities. I was rather intrigued by a green tomato cake, but I wanted something savoury. Then I hit upon this recipe on the Food Network, by Emeril. Now that was more like it!

Of course, I didn’t follow the recipe to the letter. One change was out of necessity. The recipe calls for three different kinds of peppers: jalapeno, anaheim and pasilla. To my surprise, my local Stop and Shop actually carried quite a variety of hot peppers, but they were all in a pile and it didn’t indicate which peppers were which. Since I don’t exactly carry a field guide to chili peppers around with me, I had to take a wild guess at which ones were anaheims and pasillas. I looked it all up on the internet when I came home and I believe I came home with two red anaheims (the recipe calls for green) and two serrano chiles. As serranos are supposed to be quite hot, and I didn’t want the red anaheim chiles to muddy the green of the soup, I simply used the serranos and one jalapeno.

I also thought that the cilantro oil that Emeril used as a garnish sounded a bit boring. And because of the heat of my chile selection, I thought a cilantro lime cream might be a nice complement. I simply mixed up some chopped cilantro, a little lime juice and some greek yogurt together, and added a dollop to my soup. 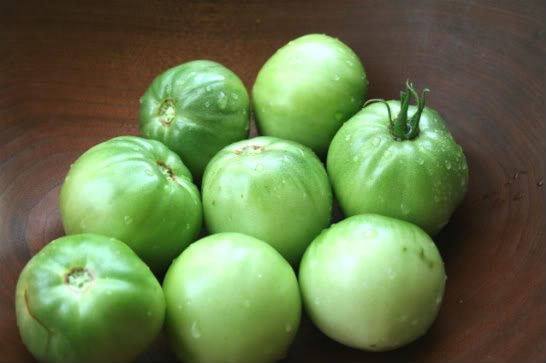 The Results: I’m just going to go ahead and say it – this stuff is fantastic! Nice and spicy, but the cilantro lime cream helps tone it down. The crunchy bits of pancetta add a wonderful flavour and texture. I mean, let’s face it, green tomatoes on their own probably don’t have much flavour at all. They are simply the vehicle to carry the pancetta and the chiles. Since everything is cooked in the pancetta drippings, the flavour is warm and smokey, with quite a kick from the chiles. It’s brilliant, using up an ingredient that would otherwise go to waste. And anyone who knows me in real life knows how much I hate waste, especially food waste.

If you have a lot of unripe tomatoes from your garden this year, I implore you to make this soup! If you don’t have a garden, sneak into your neighbours and steal their green tomatoes. It is THAT good and I will be making it again very soon.

For the Cilantro Lime Cream, mix all ingredients together in a small bowl and set aside.

For the soup, heat oil over medium heat in a large saucepan. Once it’s hot, add pancetta and cook until crispy and golden, about 8 minutes. Remove with a slotted spoon and let drain on a plate lined with a paper towel.

Increase heat to medium high and cook the onions until soft, about 4 minutes. Add salt and pepper, then garlic, bay leaf and chiles. Cook for 5 minutes, stirring frequently. Add tomatoes and stock and bring to a boil. Reduce heat and simmer for 10-15 minutes or until tomatoes have softened.

Stir in lemon juice and additional salt and pepper, if desired. Spoon into bowls and add a dollop of cilantro lime cream and reserved pancetta.

Bringing this one to Potluck Friday! 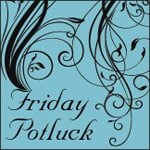