Cooking keto brownies in a slow cooker makes them extra gooey and delicious. Topped with chopped pecans and some sugar-free caramel sauce, it’s a true indulgence.

We need to talk, keto friends. We need to have a real heart to heart about these gooey keto turtle brownies. Because if you are living without such deliciousness in your life, it’s a very sad state of affairs.

Honestly, I could go on at length about keto brownies in general. They are a staple in our house, because my kids love them. It’s one treat that I can guarantee will be devoured in a matter of moments.

And there are so many wonderful ways to enjoy them. You can top them with a layer of keto peanut butter fudge. Or you can make a single serve keto mug brownie.

Or in this case, sprinkle on some toasted pecans and a little keto caramel sauce. So much chocolatey goodness that doesn’t spike your blood sugar!

Has it every occurred to you to cook your keto brownies in a slow cooker? Well, let me tell you straight up that you must give it a try!

I love making keto desserts in a slow cooker. It’s easy, for one thing. And they have a tenderness and a gooeyness that you can’t always get from oven baking.

My slow cooker chocolate cake has always been extremely popular. It’s simple but so rich and moist. Given my success with that recipe, I had to try making slow cooker brownies.

If warm, melty brownies topped with some keto ice cream are your jam, then you have to give these a try!

These slow cooker brownies use a scaled-up version of my favorite keto brownie recipe. Then it’s topped off with chopped pecans and some gooey caramel sauce. You will need:

I can’t find allulose or BochaSweet for the caramel, what else can I use?

To be very frank, these are your best two options for keto caramel sauce that doesn’t re-crystallize. You can try xylitol but it does tend to spike blood sugar a bit. If you make it just erythritol (Swerve) only, it will re-crystallize and harden as it cools.

Can I use monk fruit sweetener?

“Monk fruit sweetener” is a marketing gimmick. Turn over your bag and look at the main ingredient. Chances are it’s erythritol, which means that this sweetener will behave exactly like Swerve. It’s fine in your brownies but will make your caramel sauce re-crystallize.

I want to make these but I don’t have a slow cooker. Can I do it in the oven?

Sure! I recommend using my basic keto brownie recipe (minus the chocolate chips) and adding the pecans and caramel sauce. Then bake as directed in that recipe.

You can also try baking them in a ceramic dish to mimic the slow cooker a bit more. They will take longer to bake through so keep your eye on them.

Can I make these brownies in an Instant Pot?

I haven’t tried this myself and I doubt it would work the same way. So I can’t really advise how to do this without some experimentation.

I am allergic to almonds, can I use coconut flour?

Yes, my keto coconut flour brownies would be great for this. You will still need to scale it up to 1.5 times the recipe. 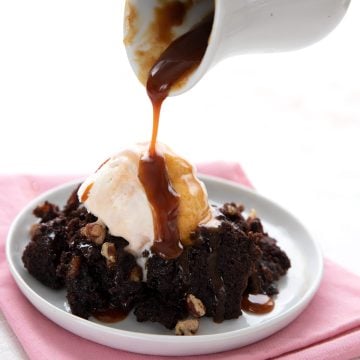