A creamy keto pumpkin pie filling with a tender almond flour crust. If you want a light and airy Thanksgiving dessert, then this Pumpkin Cream Pie is for you. With only 7g total carbs per serving, you can afford to indulge this holiday season. 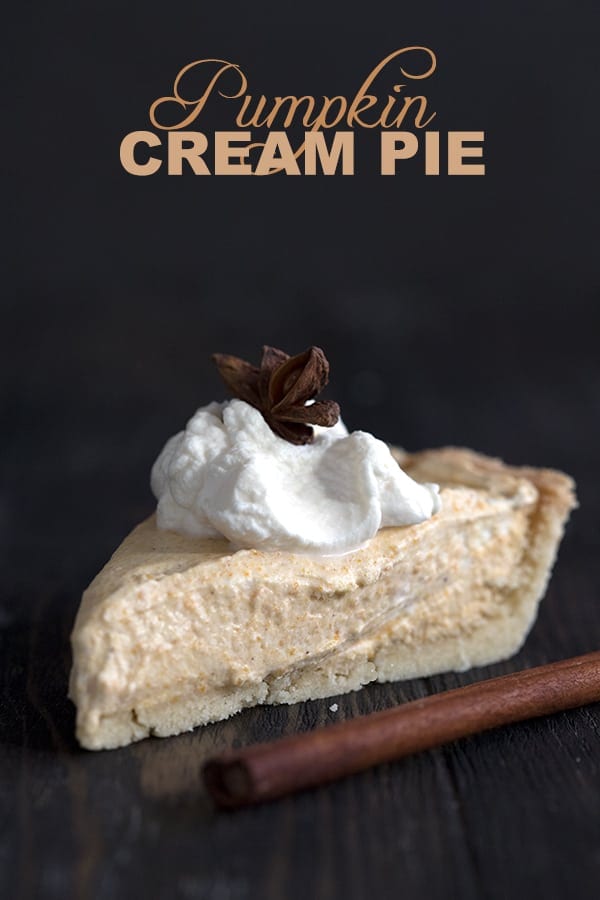 The dreaded words that anyone on a low carb diet hates to hear at the end of their Thanksgiving meal. Because that pie…oh my! It has a lot, and I mean a LOT, of carbs. Pumpkin or pecan, it doesn’t matter. With all that pie crust and all that sugar, it’s bound to be carbalicious.

Except that it really doesn’t have to be and this low carb pumpkin cream pie proves it beyond a shadow of a doubt.

This pumpkin pie recipe is a keto dieter’s dream and I promise you that it will be the highlight of your holiday meal. You will be looking forward to dessert all dinner long! 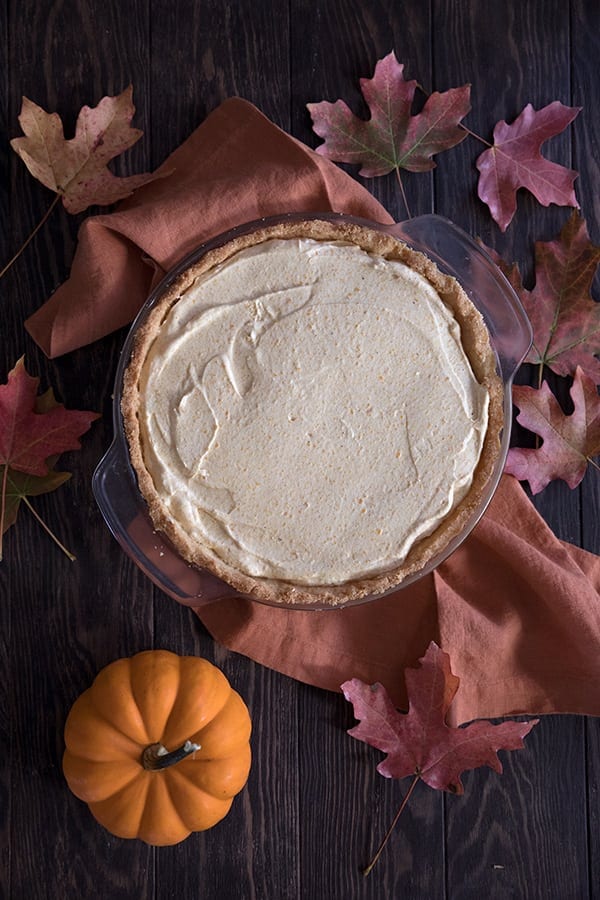 A shout out to the reader who suggested I try my hand at this. I believe it was over Instagram, and she said I was the queen of keto cream pie recipes. How could I resist such flattery?

I thought I knew what I was doing. I thought I would make it exactly the same way I made keto Strawberry Cream Pie and the Mocha Cream Pie from Easy Keto Desserts. Oh boy, was I wrong.

For some reason, when I added my pumpkin mixture to my whipped cream, the filling completely curdled. It tasted great, but it was remarkably ugly. All little bits of orange pumpkin puree mottled by little bits of white whipped cream. It wasn’t uniform at all and nothing I did made it come back together. And I knew it wouldn’t set properly either, since they wouldn’t mix together. 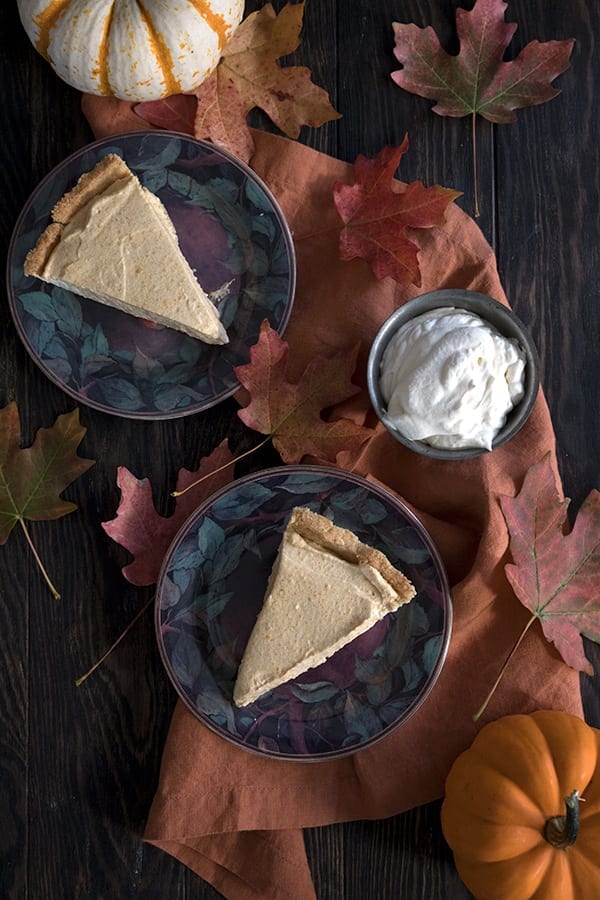 Don’t make the same mistake I did! I tossed that filling and started over.

Many pumpkin cream pie recipes rely heavily on cream cheese for the filling, but that’s more of a pumpkin cheesecake and that wasn’t what I was after here. But I knew it would help give the filling some structure so I used only half of a brick of cream cheese. And then I also used some gelatin dissolved in hot water to give it a lighter, more airy quality.

I also used the new Swerve Brown sweetener for a true pumpkin pie flavor, with that hint of caramel or molasses. You could use all powdered Swerve here, if you prefer. The second filling turned out just as I wanted it, a light pumpkin mousse rather than a dense cheesecake, but so rich and satisfying at the same time.

For the crust, I highly recommend using my Almond Flour Pie Crust. It’s so easy because it’s simply a press in pie crust, but it ends up being tender and flaky, and it holds up to any filling you want to put into it. You could make it no-bake, but in this particular application, I highly recommend baking it. It has more crispness that way, which contrasts deliciously with the creamy no-bake pumpkin filling.

But you know, if you wanted to skip the crust altogether and eat this as a delicious pumpkin mousse, I wouldn’t stop you. 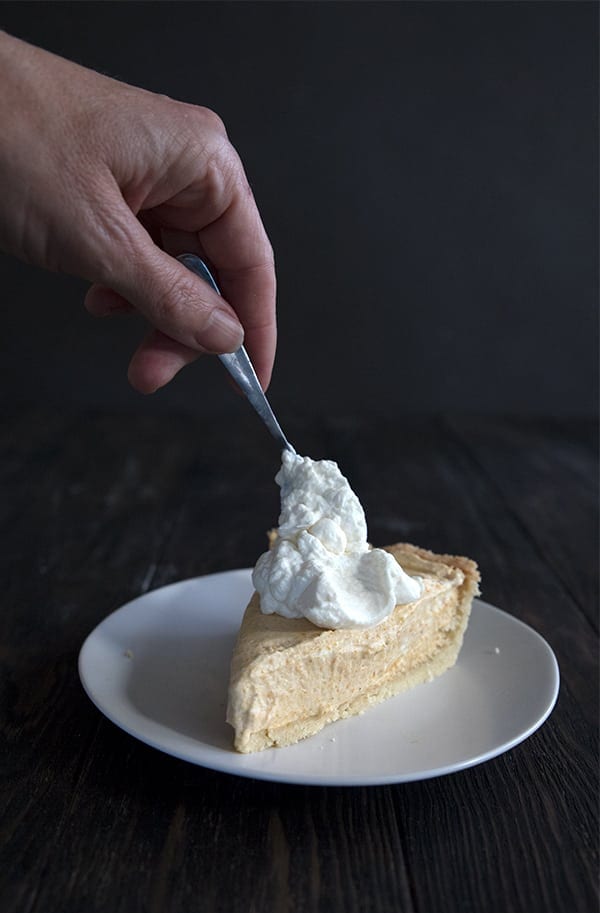 It’s so wonderful to have sugar free options to some of our favorite traditional desserts. This pumpkin cream pie isn’t like your traditional custard pie. It’s not nearly as dense or heavy, but it’s still full of amazing pumpkin pie flavor.

And only the crust is baked, so it’s really easy to make. Be sure to use the gelatin to make sure it sets properly, but you shouldn’t have any worries that it won’t turn out well. Sometimes regular pumpkin pie doesn’t set or makes the crust soggy but it won’t happen with this pumpkin cream filling.

Here’s to a happy and healthy keto Thanksgiving! Who wants pie? 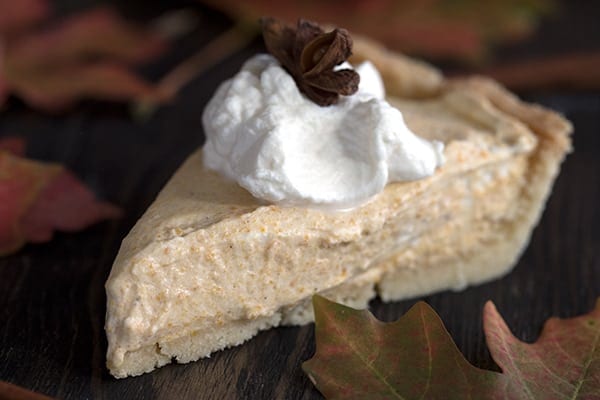 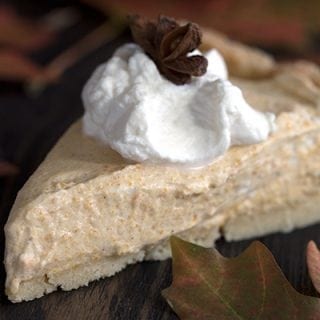 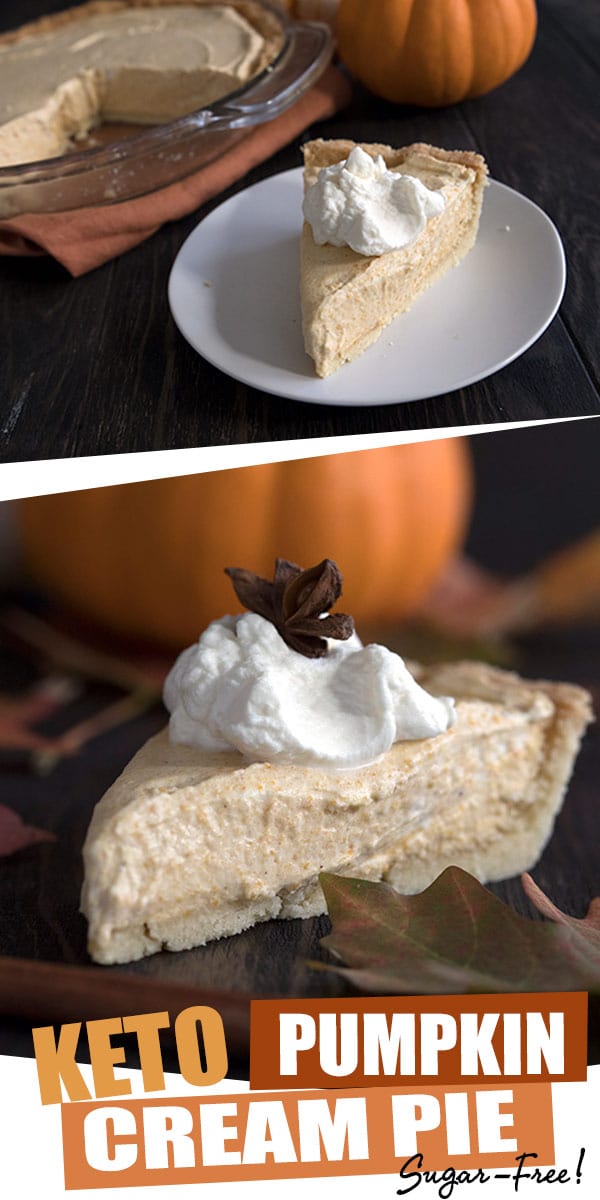