Looking for a great low carb Thanksgiving stuffing recipe? Look no further, this is the one! Made with grain-free, gluten-free Cheddar Beer Bread. This post is sponsored by Jones Dairy Farm. 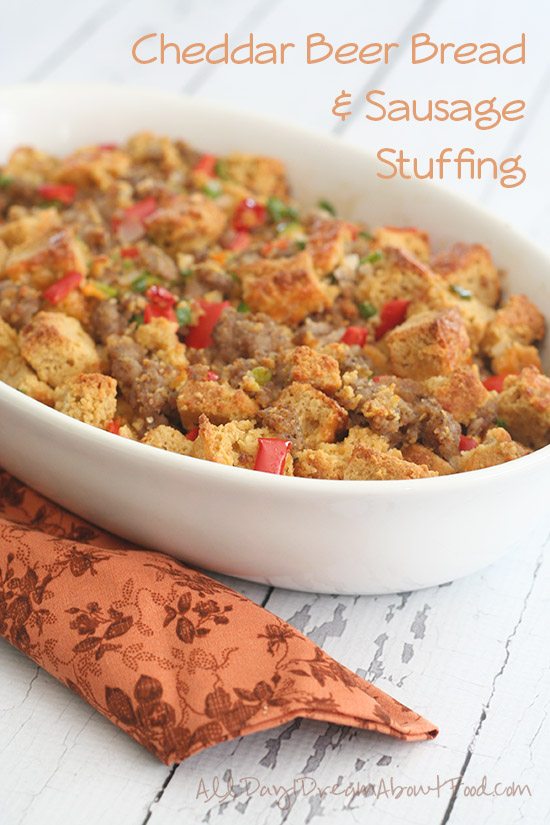 Thanksgiving stuffing is one of those beloved, time-honoured traditions that no one can seem to live without. And yet stuffing can vary so much place to place and household to household. It’s not one thing, it’s many, many things, and everyone has their opinions about what makes a great stuffing. Should it be stale bread or rice? Cornbread or wheat bread? Spicy or mellow? And should it be cooked inside the bird at all, or just alongside in a baking pan? The most important questions in life. Or at least in November.

I for one think stuffing should always contain sausage and plenty of it. You could use almost anything else to stuff the bird, as long as there is a high ratio of sausage to other stuffing ingredients. When I think back on all the many stuffings I’ve had over the years, all of my favourites contained sausage. I know I can’t be alone here.

Thankfully, Jones Dairy Farm, purveyors of  fine sausage, bacon and other deliciousness, has launched the Stuffing & More site  well in advance of Stuffing Day (you thought it was Turkey Day? Think again!). More than 25 unique stuffing recipes, plus cooking tips and a Stuffing vs. Dressing Poll. You need to go vote, this is an issue of national importance! And a coupon for $1 off Jones Dairy Farm sausage.

And from me…a recipe for low carb, gluten-free Cheddar Beer Bread & Sausage Stuffing. The cheddar beer bread on its own is pretty great. But chop it up, dry it out and combine it with sausage and peppers? Low carb Thanksgiving never tasted so good!

Also be sure to check out this traditional Gluten-Free Stuffing recipe. Use your own favorite low carb bread for a keto option. 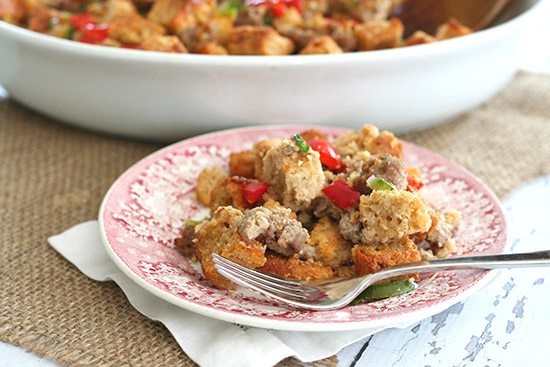