Learn how to make the best keto gravy with this easy recipe. Rich and delicious, you won’t miss the carbs! Great with roast turkey or chicken.

I should have shared my keto gravy recipe with you long ago. I’ve shared all sorts of other keto thanksgiving recipes, so why have I held back on the gravy?

I promise I was not trying to keep anything from you. It’s just that I’ve never taken the time to formalize it and write it down from start to finish.

I am one of those people who makes gravy on the fly, when the turkey’s in the oven. I make it slightly differently every time, depending on what I have on hand and how big the bird is.

But you deserve a really good gravy recipe for your holiday meals, and so I roasted a chicken and spent time working out the ideal ratios. This is a classic gravy that goes perfectly with chicken or turkey. And it’s highly adaptable for any herbs and spices you want to add in.

Keto thickeners for gravies and sauces

The first thing we need to discuss is how to thicken your gravy. Because no one likes thin, watery gravy, am I right?

Traditional gravy is usually thickened with flour or a starch like cornstarch or tapioca starch. Flour gravies usually start off with a roux, a thick paste of butter and flour cooked until brown, before the broth is slowly whisked in. Whereas starch is usually added to the broth at the end of cooking.

Neither flour nor starch are good options for a keto-friendly gravy. But never fear! There are several possible keto solutions – but I find one of them superior to all the rest.

You can always use gums like xanthan and guar gum, but they tend to give the gravy a slightly slimy quality. I’ve also seen recipes that blend cream cheese into the hot broth – and that works because cream cheese contains some sort of gum, like xanthan or locust bean.

But I don’t want cream cheese in my gravy, thank you very much!

So for the best classic keto gravy, do yourself a favor and get some glucomannan powder. It makes your gravy thick and rich, without any sliminess or cream cheese.

Glucomannan is fiber extracted from the konjac root, the same ingredient that’s used in shiritaki noodles. It’s often sold as a dietary supplement, so make sure you aren’t purchasing the capsules, rather than the loose powder.

It’s a great thickener and a little goes a long way. For keto gravy, I experimented and found that ¼ teaspoon per cup of liquid was just about right.

One huge advantage over gums like xanthan is that it doesn’t clump up the minute it hits the warm liquid. So you don’t have to work quite so quickly to whisk it into your sauce.

It’s incredibly useful so I promise you it won’t go to waste. I’ve used glucomannan in quite a few of my recipes, including my Keto Mongolian Beef, Keto Chicken and Mushrooms, and my updated Keto Rhubarb Crisp.

How to make the best keto gravy

This low carb gravy recipe is really quite straightforward and goes perfectly with chicken or turkey. And you can scale it up or down, depending on the size of your feast!

How to store keto gravy

Gravy of any kind is best made fresh but this does do well in the fridge for several days. So you can enjoy leftover turkey and keto gravy as long as you have the taste for it!

As I have mentioned, it will thicken more as it cools. If it’s very thick, place it in a saucepan and add a few tablespoons of broth. Warm over low heat and whisk frequently until it thins out. 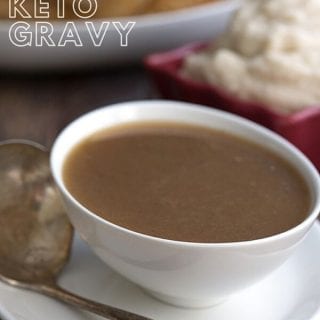 You can easily scale this recipe up for a larger bird or if you just love to drown everything in gravy. For every cup of liquid, you need about ¼ teaspoon glucomannan.
Nutrition Facts
Easy Keto Gravy
Amount Per Serving (1 serving = about ⅓ cup)
Calories 47 Calories from Fat 36
% Daily Value*
Fat 4g6%
Carbohydrates 1.1g0%
Fiber 0.3g1%
Protein 1.4g3%
* Percent Daily Values are based on a 2000 calorie diet.
3.2K shares
free email series