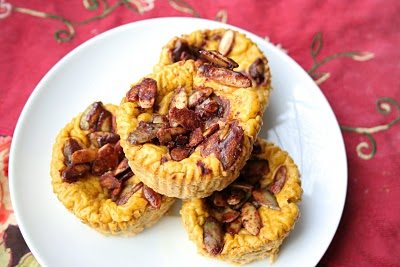 The first order of business: the winner of a Mrs. May’s Naturals Prize Pack is Cristina from Teenie Cakes! Congratulations, Cristina! I think you will really like these and I hope you spread the word about how great they are. I will be contacting you to get your mailing address so I can send you some goodies.

And now to the second order of business. Are these not some of the ugliest baked goods you’ve ever seen??? I certainly think so. They are pretty darn tasty, however. This is my version of a low carb “muffin” recipe I’ve seen on many sites on the internet. I put “muffin” in quotes because they really are more like mini cheesecakes than muffins. They are simply a combination of cream cheese, eggs and whatever sugar substitute you prefer. So why not call a spade a spade and refer to them as cheesecakes? I suppose it makes it easier to justify eating them for breakfast if you call them muffins! For my version, I added some canned pumpkin, some spices, and topped it all off with a cinnamon pepita streusel. The pumpkin puree adds a lot of moisture, so I used a trick out of The America’s Test Kitchen Family Cookbook and dried my pumpkin out a bit between sheets of paper towel. That helped some, but they still needed to be baked a little longer than the original recipe.

The Results: I will be the first to admit that these little guys aren’t particularly attractive. I might go so far as to say that they are fugly. But what they lack in aesthetics, they make up for in taste. They really are like little pumpkin spice cheesecakes, and the cinnamon-spiced pepitas on top add a lovely little crunch and a lot of good flavour. I want to work on getting them not to sink in the middle as they cool, because I think that would up the attractiveness quotient a great deal. Next time, I might add an additional egg and some cream to see if that can help them stay puffed up. I don’t want to lose that dense, cheesecake quality, however, so I don’t want to mess with it too much. 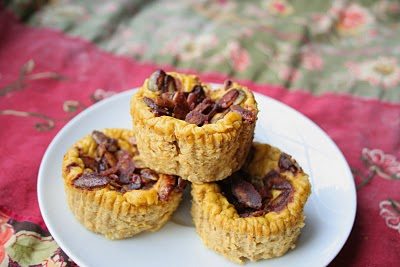 For the streusel, melt butter in a small skillet over medium heat. Add cinnamon, erythritol and pepitas and stir until coated. Heat for another 2 minutes, then remove from heat and set aside.

For the muffins, preheat oven to 350F and line 6 muffin tins with paper liners.

In a medium bowl, beat cream cheese with an electric mixer until smooth. Add in pumpkin, egg, erythritol, stevia and spices and beat until thoroughly combined and no lumps remain.

Divide batter among prepared muffin tins. Sprinkle each muffin with pepita mixture. Bake for 25-30 minutes or until puffed up and tops are just browning and beginning to crack.

Remove from oven and let cool in pan for 20 minutes. Chill in refrigerator. They are best straight out of the fridge.

Serves 6. Total carbs per muffin is 10.5g, but only 5.5g if you subtract erythritol.