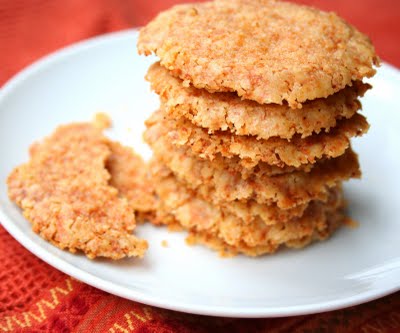 Do these look familiar? They should, I posted about them a few weeks ago. Gee, Carolyn, isn’t it kind of early to be posting repeats? I mean, your blog hasn’t been around THAT long! Well, these are not the same…not at all. They look about the same, and they taste about the same, but they are not the same. These are the entirely Gluten Free version and I am thrilled with them. You may recall the last time that I made them with my low carb wheat flour (Carbalose flour) because I wasn’t quite sure how they would hold up with almond flour. Well, this past weekend I decided to give the almond flour a go and see what happened.

It would seem that I have worked with almond flour enough now to have gained a gut instinct about what will work and what won’t. I got out the ingredients to mix up the dough with the same proportions as in the original recipe from Martha Stewart, but something told me to hold back a little butter and a little cheese. So I did. And then, as I began to rub it all together with my hands, I just knew it was still too wet and soft. I added more almond flour until I thought I had the right consistency, and then I rolled up my dough and chilled it overnight.

A little squeeze of my dough log the next morning told me it was softer than a flour-based dough would be. As a trial, I cut only three slices and baked them at 400F as in the original recipe. They cooked quickly and browned much faster, almost to the point of burning. So for the next few, I lowered the temperature and kept a close eye on them. This worked a little better, but they were not as crisp as they should be when they came out of the oven. So I put them back in with the oven turned off to crisp up some. 15 minutes later, they looked just perfect. 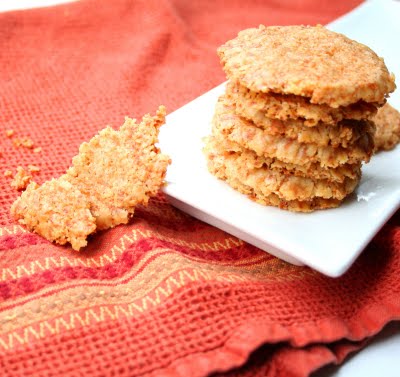 The Results: I honestly think I like these better than the flour kind. I will confess that they are a little more fragile and prone to breaking than their gluten-laden counterparts, but that is to be expected. But they have a richer flavour from the almond flour and they seem to stay crispier too. My kids love them, especially my son. When I told him he could have a few, he asked if that meant he could have a hundred. Uh, no, sweetie, more like three. He then said he loved them so much he wished he could have them every day for snack.

One of the great things about the refrigerated dough is that you can only bake a few (or a hundred) at a time, and keep the remainder chilled. I actually still have about a third of the log in the fridge, waiting for the next snack attack. 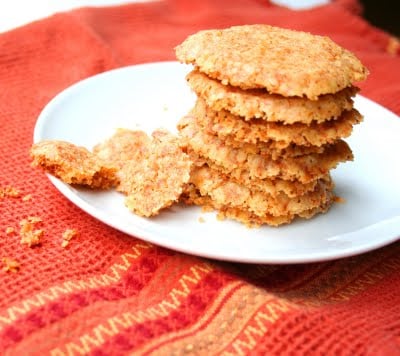 In a large bowl, whisk together almond flour, chipotle pepper and salt. Add cheese and butter and work in with hands, rubbing butter in with fingers, until a dough forms.

Transfer dough to a sheet of waxed paper and form into a log 1 1/2 inches in diameter. Roll log back and forth on counter to smooth the sides. Roll up tightly in waxed paper and refrigerate until firm, at least 4 hours and as long as several days.

Preheat oven to 350F and line a baking sheet with parchment paper. Cut log into 1/4 inch slices and bake 12 minutes, or until spread and edges are starting to brown. Turn off oven and continue to let bake and crisp, about 10 to 15 more minutes. Watch carefully to make sure they don’t burn.

Makes about 40 crisps. Each crisp has less than 1g of carbs.