Crispy tender savory keto shortbread with chipotle and cheddar. These buttery cheese crisps are an easy appetizer or snack. This post is sponsored by Cabot Creamery.

Cheese cracker fans, you’re going to love this updated recipe for Keto Chipotle Cheese Crisps! Be forewarned that they are highly addictive.

You will likely find yourself doing what my husband I and I did – cruising into your kitchen every so often and grabbing one, or two, as you walk by.

They are easy to make too. And since it’s a slice-and-bake recipe, you can make a few at a time for snacking, or make the whole batch for a party-style appetizer.

Cheddar and I are on very good terms. We’ve been friends for a long time, and it’s been there for me through many ups and downs over the years. But I think it may be when I discovered Cabot that we really took our relationship to the next level.

Yes, I really do have a strong bond with Cabot cheddar. Because to my palate, it’s the best tasting cheddar out there. And it’s not just my palate that thinks so. Cabot cheddar has won countless awards, both nationally and internationally.

Besides putting out some of the world’s best cheddar, Cabot is an exceptional company. It’s a co-op, which means that the dairy farmers own the company itself. It’s also B-Corp certified, with an emphasis on sustainability and positive community impact.

Now you can see why I love it so.

This is actually an updated, and very much improved, version of an older recipe. I had long ago attempted a low carb version of some cheddar crisps I saw from Martha Stewart.

They were amazing in flavor, but the texture was far too crumbly and fragile to make them all that useful.

This time around, I tackled them slightly differently. I used my Keto Butter Pecan Cookies as the base, but without the sweetener or the pecans. Then I rolled them into logs and froze them for an hour or so.

Thus, they became an easy slice-and-bake cracker. The texture is divine! The sharp cheddar makes them both tender and crisp. And this way, you can make as few or as many as you want, as the moment dictates.

This is a super simple recipe that results in a shortbread-like texture. Here are my best tips for getting it right:

How to store keto cheddar crisps

The baked crackers are best stored in a covered container on your counter.

However, the dough logs can remain frozen for months on end. When you are ready to bake them, let them sit out for 30 minutes or so, to soften just enough so you can slice them. 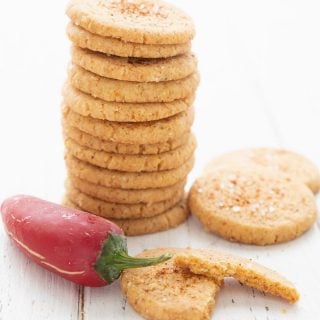