These tender almond flour donuts have a ribbon of cinnamon in the center and are decorated to look just like mini King Cakes. Perfect for celebrating Mardi Gras!

I really wanted to be bringing you a full Keto King Cake recipe today. I tried, I really tried!

Alas, it was not to be. I tried to make a king cake out of a sweet version of my keto bagels, and although it was absolutely delicious, it fell a little flat.

And I mean that quite literally. It puffed and then it spread out and flattened and was less than impressive looking and certainly not at all like the rounded dome of the New Orleans classic.

So you’re just going to have to settle for king cake donuts today. While I have some ideas on how to correct my cake, I don’t have time to try it out before Mardis Gras.

Many people think that king cake is just a round cake with white glaze and purple, green, and yellow sprinkles. I’ve seen many a bundt cake passed off as a king cake.

It’s actually more of a sweet bread dough with a cinnamon filling, rolled up and baked in a circle. And that’s what I was aiming for with my fathead dough version.

When it didn’t work out to my satisfaction, I decided to pivot and make donuts with fun Mardi Gras colors instead.

But I wanted to stay somewhat true to the original cake. So instead of just making keto cinnamon donuts, I decided to make a cinnamon filling and bake that in the center.

Pretty tasty stuff, I have to say!

Before we go any further, we need to discuss how best to decorate your donuts so they really resemble king cakes.

First you need a stark white glaze. Sometimes it contains cream cheese but sometimes it’s simply powdered sugar, lemon juice, and cream or water. I went with the simpler version, made with powdered Swerve, for these donuts.

The Sprinkle Company to the rescue! They’ve got gorgeous sanding “sugar” (made with erythritol) in a multitude of colors. I have been eyeing them for a while and decided I would purchase the whole set for myself for the holidays.

My friend Deana of Good Dee’s also makes some sanding “sugar” in yellow and pink. No other colors at the moment.

But if you can’t order any of these, you can also make your own sanding sugar with erythritol or any granulated sweetener. I’ve done this before and it’s fun and easy.

You just need to mix a bit of food coloring in with the sweetener. These all natural powders work well because there is no moisture so it won’t make your sweetener clump together. Start with just a little sprinkle at a time, as they are extremely potent.

These are easy and fun, and a great way to celebrate Mardi Gras, keto style! Here are my best tips for getting it right:

Do this first so that it’s ready to go when your donut batter is ready. This is meant to be thin and somewhat liquid, so you can simply drizzle it into the donut batter.

I find that whipping the donut batter in either a good blender or a food processor makes for a lighter, fluffier, and more cohesive mixture. From there, it’s easy to simply spoon it into the donut pan.

If you don’t have a good strong blender or food processor, simply mix the wet and dry ingredients together in a bowl.

Spoon a little donut batter into each donut well, enough so that it covers the bottom of each. Then simply drizzle a bit of the cinnamon filling around the center of the donut cavity and top with the remaining batter.

The glaze should be thin enough to drizzle over the donuts and spread to the edges, but thick enough so that it leaves a nice coating and doesn’t disappear into them.

I usually start by spooning it over the donuts and then use the spoon to spread it to the edges. A little may drip down the sides but you don’t want it sliding off too much.

I did alternating sections of green, purple, and yellow to mimic a real king cake. You only need a few pinches of the sugar-free sanding sugars for each section of the donut.

For the whole batch of donuts, you probably need 1 to 2 tablespoons of each color. That’s all it takes! 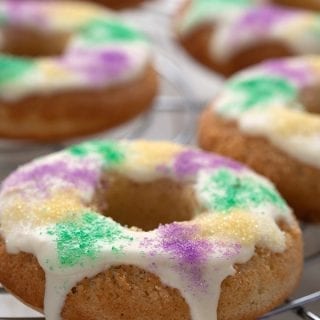