Keto chocolate biscotti dipped in dark chocolate, sprinkled with pecans, and drizzled with sugar-free caramel sauce. An extra special treat! This post is sponsored by ChocZero.

Let’s talk about the brilliance that is biscotti, because they really are quite brilliant. Think about it: baking lightly sweetened biscuits until they are completely dried out, making them perfect for dipping in and soaking up coffee.

Seriously, only the Italians could be this brilliant. And they like coffee almost as much as I do!

I adore biscotti and I have ever since I tried my first one. So it was such a delight to discover that I could create that same experience with keto ingredients. The twice-baked approach makes them perfectly dry and crisp.

I have any number keto biscotti recipes. You may be already familiar with my Keto Maple Walnut Biscotti, as well as my Chocolate Dipped Cranberry Biscotti.

And now we’re adding some Keto Turtle Biscotti to the archives. Delicious!

How to make Keto Biscotti

I have so many keto biscotti recipes, I would say I am something of an expert. They are easy to make, although a bit time-consuming because you have to bake them twice. But the end results are worth the effort!

1. Choose a nut flour or a seed flour, like almond, pecan, or sunflower. Sorry coconut flour fans, but it will not work well for keto biscotti.

2. For the first baking, form the dough into a long low log. I make mine about 10 inches by 4 inches. They do rise and spread a little during baking but not much.

3. Take them out of the oven and let them cool for about 20 to 30 minutes before slicing. They won’t hold together if you try to slice before they are cool.

4. I find that sawing back and forth breaks up the biscotti too much. A good tip is to saw at the top a bit until the knife breaks the surface, and then press straight down.

5. The second baking happens in a low temp oven, about 200F. You don’t need to flip the biscotti from side to side, just leave them standing straight up so the cut sides are exposed to the oven heat.

6. To really get them crisp, turn off the oven but let the biscotti stay inside until completely cool.

How to store keto biscotti

One of the things I love most about biscotti is how long it lasts without losing flavour or texture. Because they are baked so dry, they can last up to a week in a covered container on the counter.

If you live in a very humid environment, they may soften as they sit out. Keep them in an airtight container in a cool, dry location.

They also freeze really well. I’ve made biscotti weeks ahead of the holidays and then thawed them and dipped them in chocolate to give as gifts. Again, an airtight container is best so that they don’t get freezer burn or take on any flavor from other foods in your freezer.

I had so much fun with these, and took inspiration from my friend Kellie who writes The Suburban Soapbox. Her beautiful Turtle Biscotti caught my eye and I couldn’t wait to make a keto version.

The first step was making a plain chocolate biscotti. I used almond flour but you could also try pecan flour. You may need a little more of it to make the dough less sticky, since pecans have such a high fat content.

Then I turned to my trusty ChocZero dark chocolate chips to make these extra chocolatey and delicious. I spread a layer of melted chocolate on one side of each biscotto (yep, that’s the singular of biscotti!) so that the chopped pecans would stick.

Finally, I whipped up a half batch of my famous sugar-free keto caramel sauce, and drizzled that over each one.

Do I even need to tell you how good these were? What’s not to love? Crispy keto biscotti dipped in chocolate, pecans and caramel sauce. 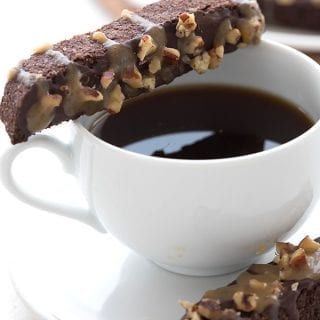