The famous Viennese Sacher Torte, a dense chocolate cake, made low carb and grain-free. Come explore Vienna and The Wachau Valley with me aboard a Viking long ship. 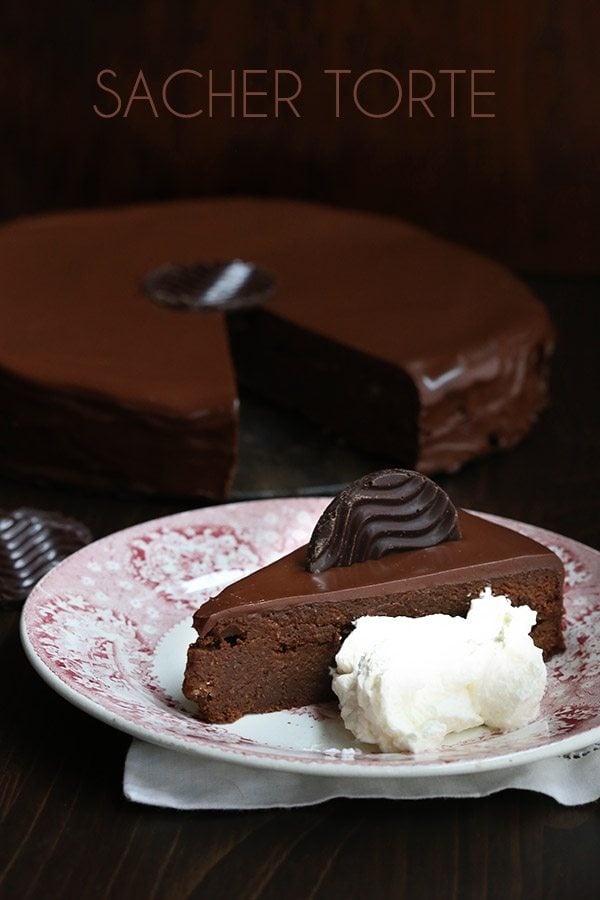 Gliding quietly up the Danube on a Viking Longship, you’d barely know you were moving if you didn’t see the landscape on either side slowly slipping by. We crossed the border into Austria sometime during the night, but the green banks of the river seemed much the same as they had in Hungary. I was only sure we were in a new country because my phone sent me a text message that my data plan would now be subject to Austrian charges. That and the fact that the Viking Jarl had lowered the Hungarian flag and raised the Austrian one. While my husband lay sleeping, I watched the boat enter one of the many locks along the Danube and then quietly glide into a remarkably modern-looking Vienna. I am not sure quite what I expected…women in dirndls and men in lederhosen, greeting us with songs from The Sound of Music, maybe? But the port where the ship docked was all glass and steel, and I could have been just about anywhere.

Thankfully, a short walk and a subway ride brought us into the area encircled by the Ringstrasse, and that was more like the Vienna of my overactive imagination. There were indeed women in dirndls and men in lederhosen, as well as many people dressed in 18th century fancy dress, all trying to sell us tickets to various shows, operas, and concerts. Our walking tour came up out of the subway right under the Vienna State Opera, a building so gloriously intricate and so large, I couldn’t get far enough away from it to take a decent picture with my zoom lens. I found this to be true of much of Vienna. Impressive large building after impressive large building, monument after monument, so crowded on top of one another that I could hardly get much sense of them. And our tour went through the heart of the city with such dizzying speed (I guess our boat had arrived a little late) that I couldn’t really keep much of it straight. I take this to mean I need to go again. Soon. 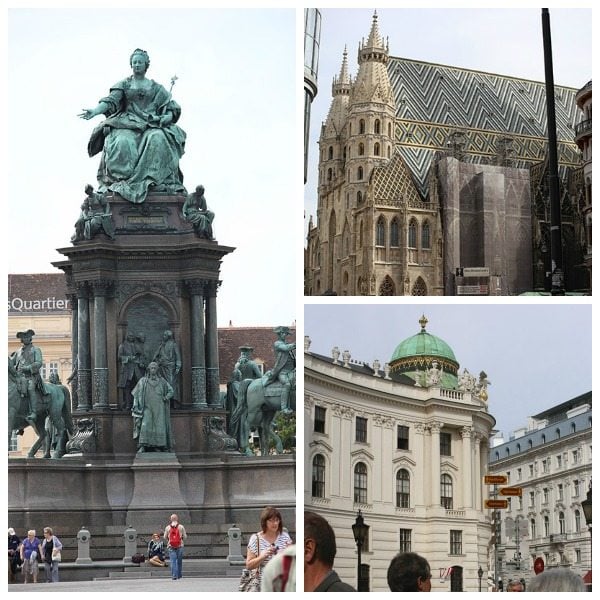 We had free time in the afternoon, and this made seeing Vienna a little more enjoyable for me. Tim and I wandered about, not really sure where we were headed, and came across parts of the city that weren’t included in our hurried tour. And then we sat at the elegant and famous Cafe Landtmann and ordered traditional Viennese coffee in German. We’d had a mini lesson the day prior on the boat, so I was able to say “Großer Brauner, bitte” with only a modicum of embarrassment over my terrible accent. That evening, we were treated to an abridged version of The Marriage of Figaro, put on just for Viking Cruises. How can you be in Vienna and not see Mozart performed?

In spite of, or perhaps because of, the grandiosity of Vienna, this was not my favourite part of the trip. That honour goes, without question, to the amazing scenery of the Wachau Valley. After leaving Vienna late at night, we entered this picturesque green valley early in the morning, and I am convinced that there is no better way to see it than from the deck of a longship. From there you can see all the wonderful sights approaching slowly, you can take in the hills and peaks and quaint villages in panoramic style, and you can take photo after photo from the perfect vantage point. I was not alone in this sentiment as many of my fellow travellers were above board, sipping their morning coffees and marvelling at the landscape. 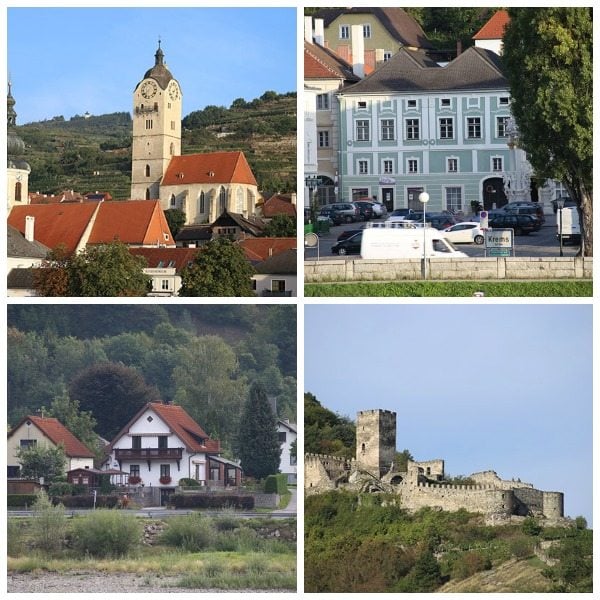 Sweet, colourful towns with church steeples and steep rows of vineyards behind? Check. Castles perched on distant hilltops? Check. Ruins where King Richard the Lionheart was imprisoned? Check. Goats clambering up the steep cliffs to eat? Check. This truly felt like Austria now, and the stunning show went on for several hours before we arrived at the beautiful town of Melk to tour the Abbey. I feel that neither my photos nor my words do it justice. But the river cruise is worth it, if only for this one day of sheer beauty.

Melk is a lovely little place with winding cobblestone streets leading up to the Melk Abbey. If I were to head back to Austria sometime, I would make a point of visiting again and possibly even staying there. It had lovely shops and cafes, with far fewer of the cheap souvenir stores you might find in other areas. The beautiful Abbey looms over the surrounding landscape from a rocky outcrop and is impressive not only for its sheer size but for its long history as a Benedictine monastery and children’s school. And it is still fully functional as both to this day.

There was a little drama going on with our Viking River Cruise during all of this. After a hot and unseasonably dry summer, the Danube was quite low in water, making it difficult for large ships to pass certain parts of the river without going aground. Viking was very upfront from day one about the possibility of our tour being somewhat interrupted by this problem. So we were not entirely surprised when, after our tour of Vienna, Viking broke the bad news that the hoped-for rain upriver in Germany had not come and that we were going to have to do a “ship swap”. This would entail packing up our belongings before we reached Passau, Germany, and being delivered by bus to another ship in Regensburg, Germany, thereby skipping the low water in that particular part of the Danube.

Although no one was exactly pleased to hear this, we all recognized that it was beyond Viking’s control and everyone was rather agreeable about the matter. However, just as we arrived in Melk the following day, our program director came over the loudspeaker to tell us all that she had just received good news and we were not going to have to swap ships after all. There was much cheering on board and the matter seemed settled. We all assumed this meant that there had been rain and the Danube was in better shape.

But that’s not the end of this little drama, so you will have to stay tuned for next time when I write about the German part of our tour… 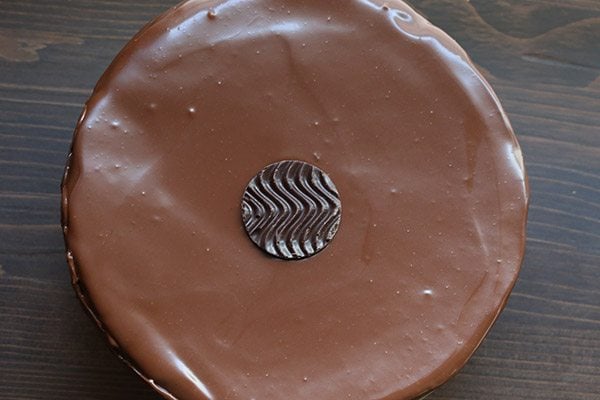 And now, as my tribute the the loveliness that is Austria, I present you with a recipe for low carb Sacher Torte. This is a traditional and somewhat controversial Viennese dessert, with two local institutions (The Hotel Sacher and Demel Bakery) laying claim to “The Original Sacher Torte” recipe. I will leave you to look that little bit of history up yourself, but suffice it to say that the Viennese are quite proud of this chocolate cake with its thin layers of apricot jam. I tried only a small taste of my husband’s while we were in Austria, but I knew it would be easy to put together a healthier version when I got home. 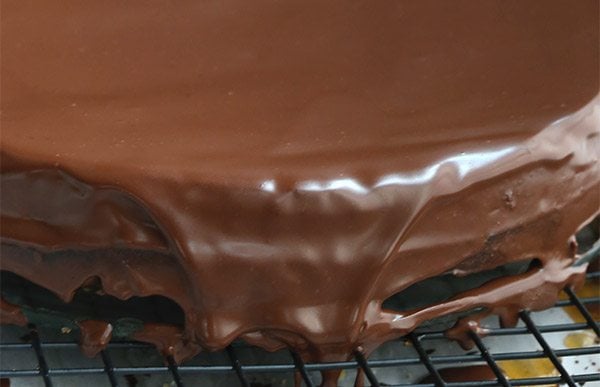 There are several companies that make sugar-free apricot jam. Most of them do so with sucralose, of which I am not a fan, so I stuck with the Nature’s Hollow version that is made with xylitol. I do find that xylitol raises my blood sugar a little more than erythritol, so I counted half of the carbs in this jam in the final carb count. But you could really use any jam here you like best.

Sacher torte is traditionally served with whipped cream that is unsweetened. I love this little touch because the cake itself is plenty sweet and the two combine so nicely together. But you could sweeten yours a little if you prefer. 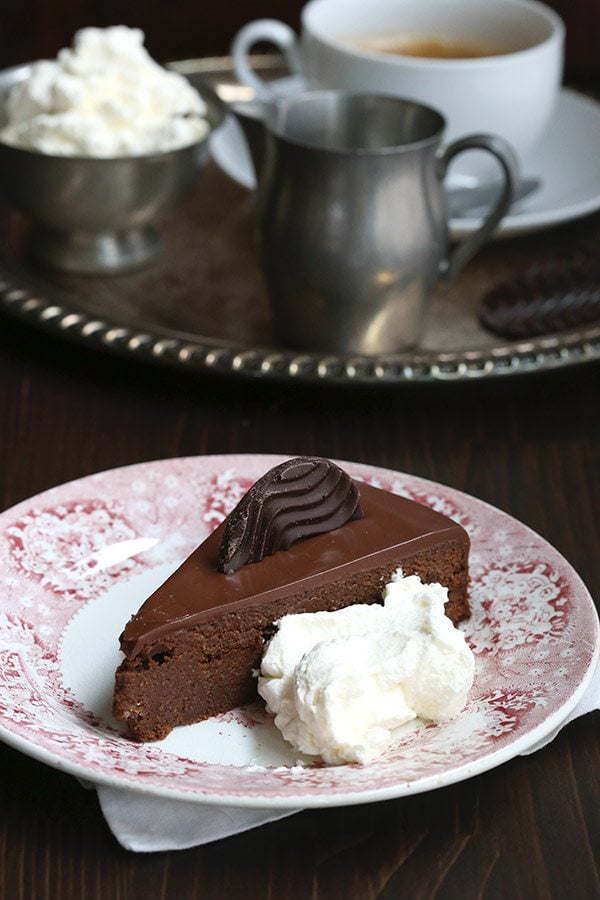 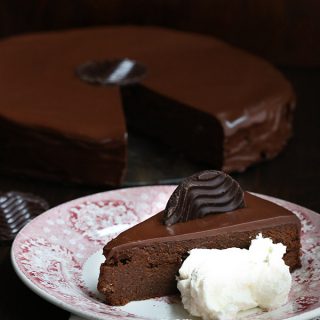