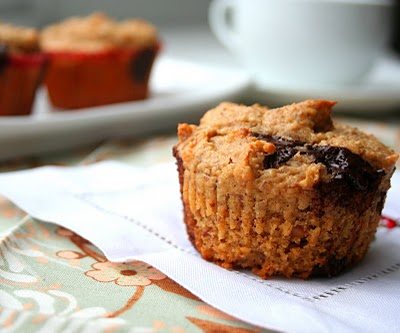 My whole family has a serious addiction to peanut butter. We can easily go through the 2-pack of large jars from our local wholesale club in under a month. It’s a little horrifying, actually, to think you just bought a whole wackload of peanut butter and then to discover that you are down to the last few scrapings in the jar. The problem is, we love it in all sorts of ways: on toast, on granola bars, in baked goods, and straight out of the jar with a spoon. It’s a quick energy snack when you need it, and it’s filling and satisfying. Oh, and it tastes good too. Really good. Especially with chocolate.

I enjoyed my first two experiments with peanut flour and started thinking of what else to make with it. My first instinct was peanut flour blondies or cookies, but I wasn’t quite sold on that idea. I let the idea keep rolling around in my mind, and somehow it transformed itself into a peanut flour coffee cake. And then, like a science experiment gone awry, it kept mutating away in my brain and finally became peanut butter muffins. I had some homemade chocolate chips in the freezer and I knew it would be a perfect match.

I really liked the texture of the muffins made with cream cheese from Jennifer Eloff’s blog, even though mine didn’t rise properly in the middle. So I knew I wanted to adapt the recipe for peanut flour and peanut butter. I gave a lot of thought to the right combination of wet and dry ingredients and oven temperature so that they would actually be muffin-shaped this time. Additionally, peanut flour is a lot denser than other nut flours, so I knew I couldn’t go all peanut flour or I might end up with muffins that were as dense as hockey pucks. 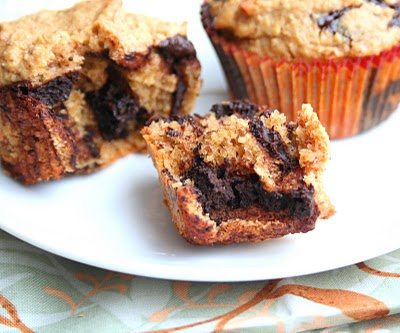 The Results: Would it be vain of me to say that I think I nailed it on the first try? Maybe, but I am going to say it anyway. I really love these. The texture is just right and the peanut buttery taste is spot on. And they didn’t sink in the middle! Honestly, the only thing I would change would be my chocolate chips, they were much meltier this time, and melted too much down the sides of the muffins. But that could be fixed with commercial chocolate chips or chopped Lindt bars. Or even no chocolate chips at all. I think the peanut butter flavour here was wonderful and would be great plain or with a smear of sugar-free jam.

These aren’t the lowest of the low carb treats I’ve ever made. Both the peanut flour and the peanut butter add some extra carbs, as do the chocolate chips. But there is also a lot of protein and fiber in these, and they are really satisfying and filling. 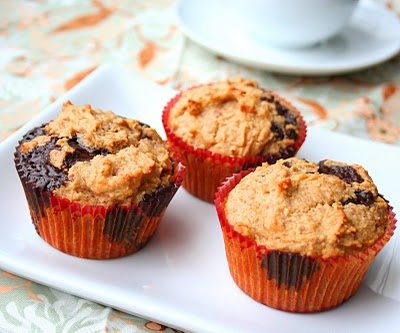 Preheat oven to 300F and line a 12-cup muffin tin with paper or silicone liners.

Divide batter among prepared muffin cups. Bake for 30 minutes or until tops are set and golden brown.

Serves 12. Carb count will vary depending on what chocolate you use, but with my homemade chocolat chips, each muffin has a total of 11.2g of carbs, but only 7.25g if you subtract erythritol.