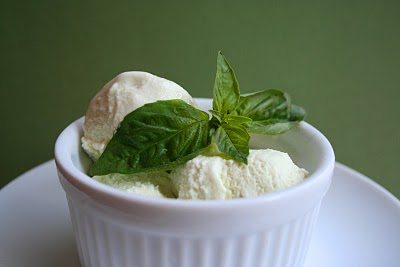 This post isn’t just about recipe, it’s also a plea for help. Send me your ideas for using up huge amounts of basil, please! We are drowning in the fragrant stuff. I planted a few seeds in an Earthbox on our patio in June, and its been growing like gangbusters. Even making several large batches of pesto has hardly put a dent in it. Every time we cut it, it grows back bigger and fuller than it was before. We simply can’t keep up! I’ve given fistfuls of basil away to friends and family, I’ve had fresh tomatoes with basil almost every night for dinner, I’ve made spicy beef and basil stir fry. I need more ideas, so please, send me your basil recipes.

This ice cream recipe was obviously born of the need to use up some basil. Sadly, it only used a measly three tablespoons! I can’t remember when I first came across a recipe for basil ice cream but I found the idea intriguing. Like most people, I think of basil as something that complements savoury dishes. I am not sure I would have attempted it in a sweet dish if we didn’t have so much. Fresh basil is usually a precious commodity in our house, bought at the grocery store with a specific recipe in mind and any leftovers are made into my husband’s wonderful pesto. But our abundance of basil got me thinking about using it in different ways.

I’ve also been meaning to make some low carb ice cream. For those of us with blood sugar issues, there aren’t a lot of storebought options. The sugar-free varieties often have as many carbs as regular ice cream, and even the truly low carb versions have a lot of fillers that don’t really need to be there. It’s quite surprising, given that making ice cream low carb isn’t particularly hard. More cream and less milk cuts out a lot of the carbs in one fell swoop and makes for a richer tasting dessert. So it wasn’t a huge cognitive leap to make some low carb basil ice cream. I wasn’t sure my kids would go for it, but I was willing to give it a try. 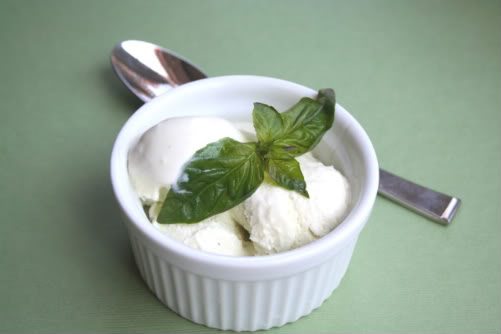 The Results: Basil ice cream is really quite lovely, I must say. The basil flavour is subtle but unmistakeable. I find that as I take a bite, I keep expecting it to be savoury and I’m a little surprised when it’s sweet instead, but it’s delicious. It’s also quite refreshing, and not overpoweringly sweet like some traditional flavours of ice cream (and I say that as one who loves the cloyingly sweet chocolates and caramels of traditional ice cream!). I am a fan, and will be making this again. I might also experiment with other herb-infused ice creams. Any suggestions???

As with most homemade ice creams, the leftovers harden significantly when kept in the freezer. Let it sit in the fridge for at least half an hour before serving.

In a medium saucepan, bring half and half, basil, erythritol and salt to a gentle boil. Let steep for 30 minutes.

Transfer cream basil mixture to a blender and blend until basil is finely ground. You may want to cover the lid of your blender with a tea towel, as it tends to spill over when you turn the blender on.

Beat egg yolks in a medium bowl with an electric mixer until thick and golden, about one minute. Add cream basil mixture in a stream and beat until combined. Pour mixture back into saucepan and cook over medium heat, stirring constantly, until mixture steams but does not boil. It should register 175F on an instant-read thermometer and be thick enough to coat the back of a spoon.

Remove from heat and pour through a fine-mesh sieve into a metal bowl. Set bowl into a larger bowl of ice water and let cool 10 minutes. Cover tightly with plastic wrap and chill thoroughly in refrigerator, at least three hours.

Stir in cream and stevia and churn in ice cream maker according to manufacturer’s directions. When it resembles soft serve ice cream, transfer to an airtight container, cover surface with plastic wrap, and freeze until firm, at least 2 hours.

Serves 6. 12.5g total carbs per serving. 4.6g of carbs if you subtract erythritol.