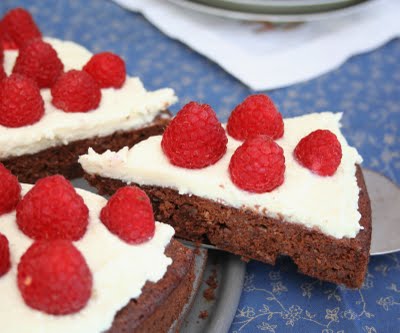 That feeling of being perpetually behind the eight ball, I know it well. As a mother of three young children, I am only too familiar with that sense of hurrying from one thing to the next without being able to fully concentrate on the task at hand. There are plenty of days I am forever doing, doing, doing without ever feeling like anything has actually gotten done. It isn’t just the pick-ups and drop-offs to various schools and activities, but the constant cleaning up and tidying, cooking and feeding, helping and hand-holding. But those are the normal days. Then there are the days when nothing goes right and the wheels fall of the wagon from the first moment. Those are the days when I am not just behind the eight ball, I am behind all the balls on the billiard table and you are likely to find me hiding under it, nursing a stiff cocktail by day’s end. 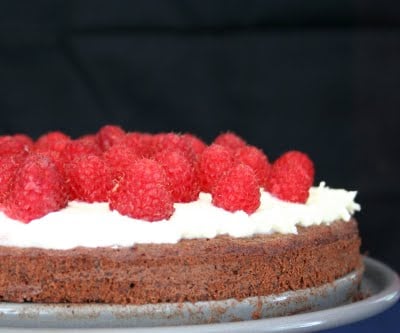 Monday was just such a day. I figured I would get ahead of the game by forgoing my daily run in favour of staying home to clean and prepare for a visit from my father. But I was already a little blue because my computer has another virus, and I am nothing without my computer. So I arrived promptly at the computer doctor’s shop at 11am, when the website said they opened, two of my three kids in tow. Apparently I was the only one who was so prompt, as the sign on their door said they didn’t open until 12pm. Grrrrr. Fine, get home, get one child off to his afternoon kindergarten, head back to the shop at 12:10 pm, cranky baby in tow. Still closed. GRRRRRR (with a few F-bombs said under my breath for good measure). Get home, put cranky baby down for a nap. Whip up a flourless chocolate torte, leave a slightly huffy phone message on computer doctor’s answering machine, clean bathrooms, change sheets in guestroom. Attempt to whip up lovely mascarpone topping for flourless chocolate torte that proceeds to curdle like crazy, all lumpy and rather unattractive, although still very tasty. A few more F-bombs were dropped, this time out loud. 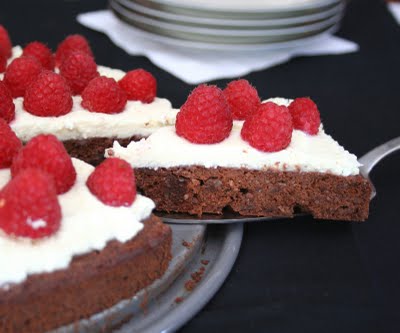 Head to husband’s computer to look up rescue remedies for curdled mascarpone. Get conflicting advice. Decide to add a bit of whipping cream and whip the hell out of it, hoping to beat it into creamy submission (and take out aggressions at computer doctor in the process). Get something somewhat better-looking, although not perfect. Get it spread, top it with fresh berries, frantically try to take photos of it before baby wakes up and father arrives. Oooh, not going to happen. Baby wakes up early and father arrives on doorstep almost at the same moment. Baby hasn’t seen grandfather in 6 months and clings desperately to mama’s arms, screaming like a banshee if put down. Cake wilting away on dining room table, with only a few frantic photos taken. Time to just cut my losses on cake photos.

Kindergartner arrives home and now it’s time to pick up pre-schooler and shuttle off to swim lessons. Drop computer off at doctor’s (FINALLY OPEN!) on the way. Call husband to discuss ordering take-out for dinner, settle on favourite BBQ joint. Soooo looking forward to ribs and beer! Driving home from swimming, husband calls to say that BBQ joint isn’t open on Mondays. F-bomb, F-bomb, F-bomb! Well isn’t that just the icing (or the curdled mascarpone) on the cake? 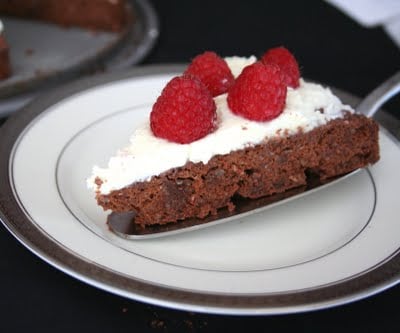 What’s the saying? All’s well that ends well? Because it was. In the end, we took the kids to their favourite family restaurant, just so we wouldn’t have to do the dishes. My middle child, in her excitement over seeing her Granddad and going to the restaurant, made up a hilarious song about it and had us all cracking up – the bright spot of my day. We had someone else cook and clean for us for dinner, and I had a stiff martini to help relax. We had a good time and that frantic, behind the eight ball feeling in my chest eased a bit. Just a bit. And that’s enough. 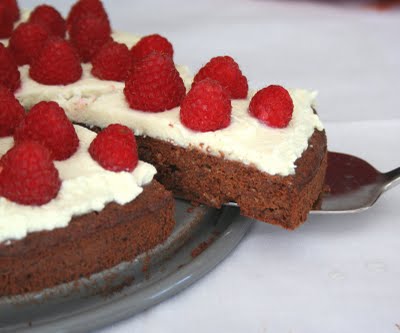 The Results: As for the cake, it’s actually quite good. I can’t quite figure out why my mascarpone went all lumpy and wouldn’t smooth out, but I suspect it has something to do with the powdered erythritol I added, but in my searching on the internet, it seems to sometimes happen with sugar too. Not really sure why, but I would say not to beat the mascarpone with an electric beater. I would change the sweetener to stevia and I would stir the cream and stevia in by hand. Who knew mascarpone was such a sensitive little cheese?

And if that doesn’t work, you can always beat the hell out of it, dropping F-bombs and cursing businesses that aren’t open when they say they will be. Hey, it worked for me! 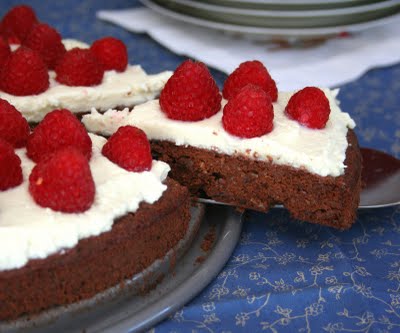 For the torte, preheat oven to 325F and butter a 9-inch springform pan.

Melt butter in a small saucepan and whisk in cocoa powder until smooth. Set aside to let cool.

In large bowl, beat egg yolks until thickened and pale yellow, about 4 minutes. Beat in erythritol and stevia until combined. Beat in cocoa mixture until fully incorporated. Stir in ground pecans.

With clean beaters, beat egg whites in another large bowl until stiff but not dry. Fold into chocolate mixture in two additions. Spread batter in prepared pan and smooth the top.

Bake 18-22 minutes or until top is firm to the touch and a tester inserted in the center comes out clean. Let cool in pan for 5 minutes, then run a sharp knife around edge of cake and carefully remove the sides. Let cool completely.

For the topping, stir mascarpone, whipping cream and stevia together until smooth. Spread over top of cooled cake. Arrange berries over top.

Serves 12. Each serving has a total of 9g of carbs and 2.2g of fiber, but only 5g if you subtract erythritol.