This rich and creamy keto seafood chowder recipe is a healthy comfort food meal. Make it with clams or with white fish. Either way, it’s an easy low carb dinner recipe that takes less than 40 minutes, start to finish. 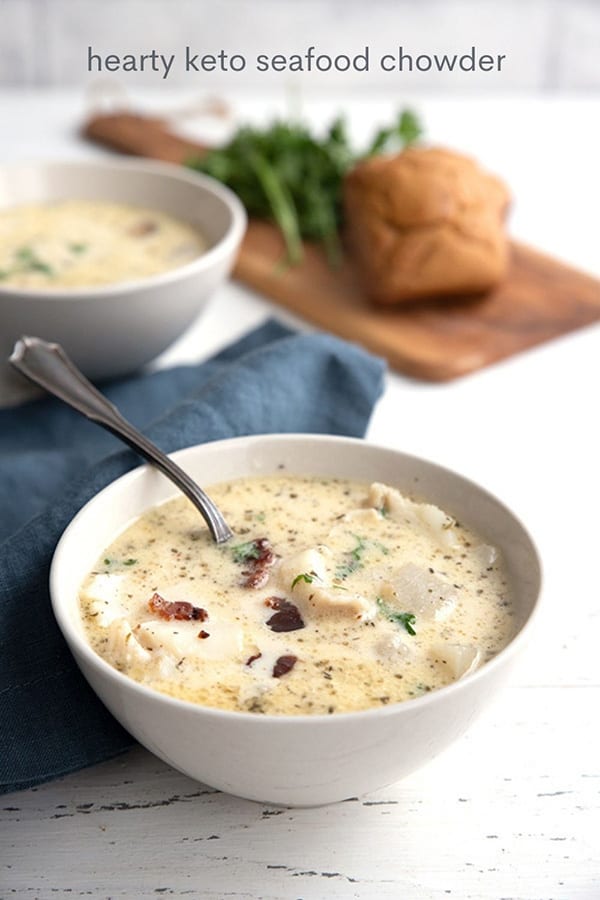 I first wrote this keto seafood chowder recipe back in the early days of All Day I Dream About Food, all the way back in 2012. It’s rich and hearty, and can be made as clam chowder or fish chowder. It’s a staple in our house during the cold and rainy weather.

I lived in Boston for over 11 years and I like to think that makes me something of an expert on clam chowder. But maybe that just really makes me an expert on how to pronounce clam chowder with a Boston accent.

Repeat after me: Chowdah. Chowdaaaah. You mustn’t say “Chowderrr”, that’s too boring and it won’t taste as good.  I don’t care where you are from…California, Canada, even France. Really play it up, roll it out over your tongue, enjoy it. It will make the clam chowder experience that much more delicious. 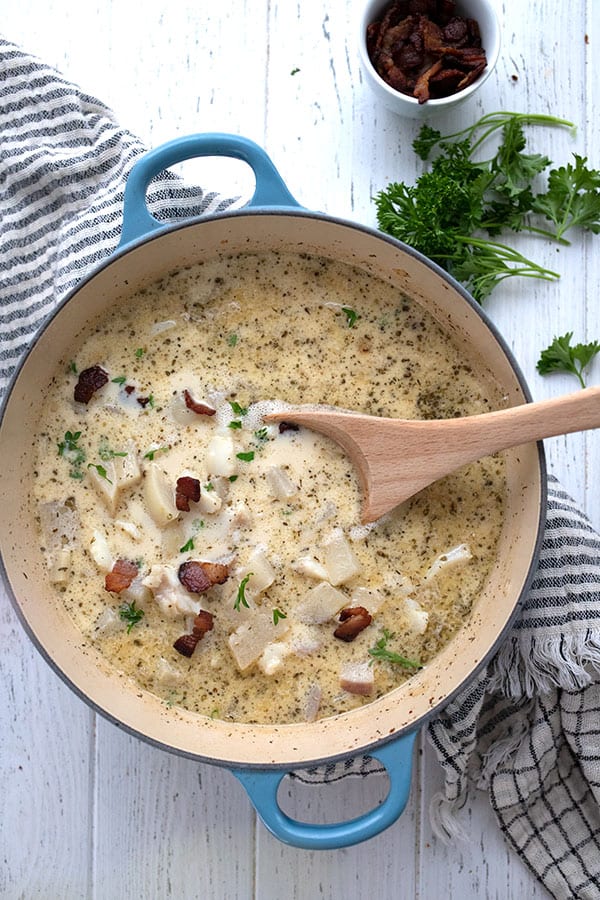 I do love me some good chowdah. Hearty, full of cream, lightly flavored with fish or clams, it fills you up with goodness and warms you to your toes.  But conventional seafood chowder is often so thick, your spoon can stand straight up in it. I’ve had the chowder from Union Oyster House and it’s more like eating porridge

All of that glorious thickness comes from copious amounts of potatoes and flour, and you can believe it packs a hefty carb punch. So how exactly does one go about reducing the carbs to make a keto friendly chowder?

Replacing the potatoes is easy and you’ve got some choices here. My favorite substitute for keto soups and stews is turnip, as I think it ends up most like potatoes in taste and texture. Daikon radish is also a great alternative. Simply cube these vegetables the same way you would a potato and add it in. Do keep in mind that because they aren’t as starchy, they cook through a little faster so you want only want to add them in for that last 15 to 20 minus of cooking.

To thicken the broth and make it thicker and richer, you can whisk in some glucomannan or xanthan gum toward the end of cooking.

Clams or fish, it’s up to you!

I deliberately called this seafood chowder so that you can decide for yourself whether you want fish chowder or clam chowder. The cooking method and time of addition are the same, either way.

For fish, I recommend a firm white fish like cod or halibut, cut into 1 inch pieces. For clams, you want to add 2 small (6 oz or so) cans of drained clams.

One thing to note is that clams do actually contain carbs. Strange but true! Most molluscs have some carbs in them, even though they seem like they should just be protein and fat. So using clams will add a few carbs to each serving. 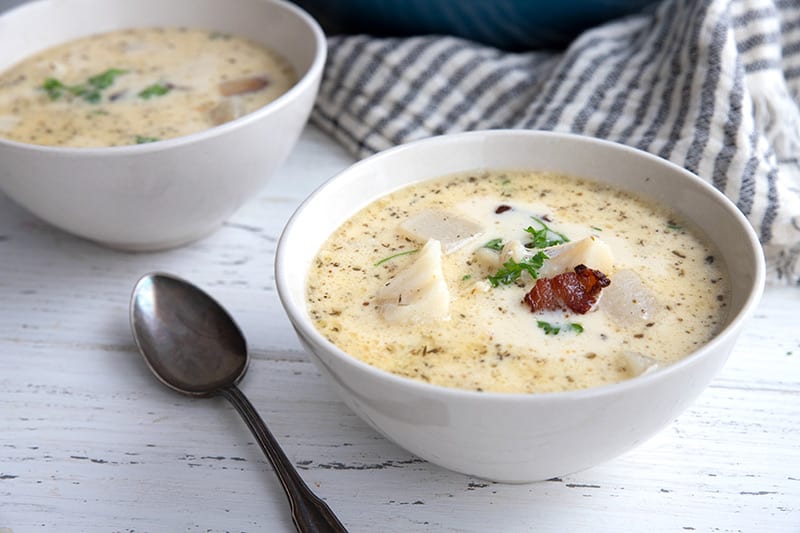 How to make keto seafood chowder

This is an easy recipe that takes minimal prep time and cooks up in less than 30 minutes. Here are my best tips for getting it right.

Really make sure to get it nice and crisp, so that it doesn’t go soggy when you add it to the chowder. I like to chop my bacon before cooking so that it crisps and browns more evenly.

Add the onion and turnips

Remove the bacon to a plate but leave all the remaining grease in there, as it’s perfect for cooking the onion and turnips. Cook just until the onions are tender.

Add the chicken broth and simmer

Simmer the broth until the turnip is fork tender, about 10 to 15 minutes. Then add some dried thyme and season to taste with salt and pepper.

In a seafood chowder such as this, the fish or clams get added only at the very end of cooking, as they cook very quickly. They only need about 4 minutes to cook through.

These ingredients go in at the very end as they don’t really need to cook. And cream can curdle if it’s added to a chowder too early.

You can eat the chowder just as it is but if you prefer a thicker broth, I recommend glucomannan powder. It’s made from konjac root and thickens really nicely with only ½ to ¾ teaspoon. I also use it in my keto gravy recipe. 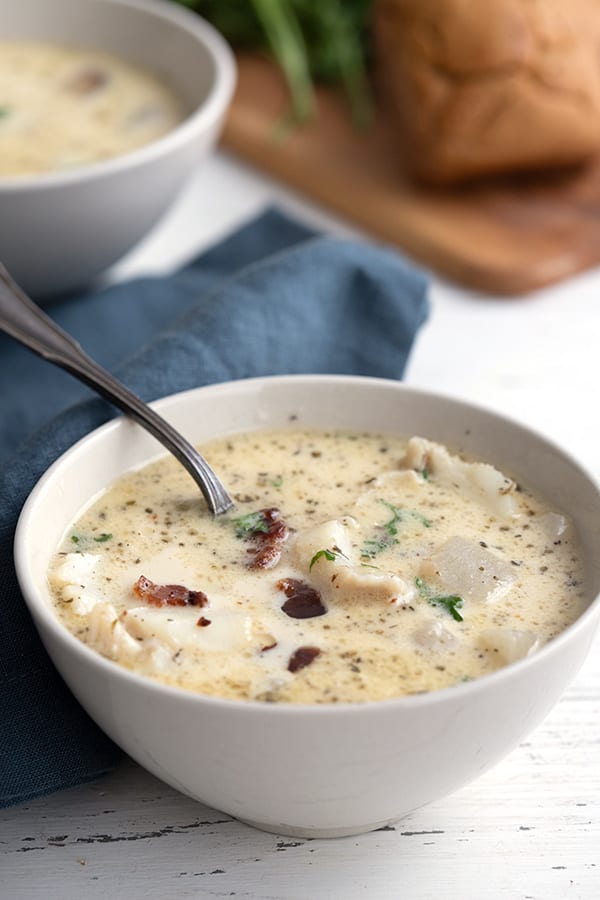 Can you make keto chowder ahead?

As with all fish based soups and stews, keto seafood chowder is best when it’s freshly made. However, if you have leftovers, you can heat them gently the next day and they are just as good. Store it in a covered container in the fridge.

I wouldn’t keep it around longer than two or three days and it’s not a recipe that freezes well.

This really is a wonderful chowder and you wouldn’t be able to tell the turnips from potatoes for a second unless I told you that’s what they were.

And I’ve made this recipe with both fish and clams – it’s delicious both ways. With the chilly weather upon us, it’s so comforting to whip up a pot of this delicious low carb chowder. You won’t miss the potatoes or the flour for a second. 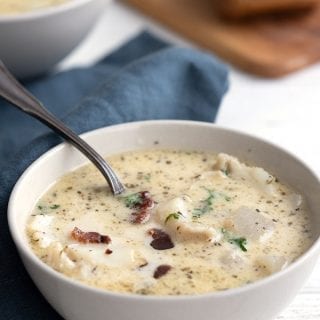