This tender keto apple cake has all the delicious flavor of an apple cider donut. Dusted with cinnamon and sweetener, it’s a perfect low carb fall dessert.

Nothing says fall is here like the smell of an apple cider donut. Let’s be honest, they’re pretty hard to resist at this time of year. But let’s also be honest about the fact that your blood sugar won’t thank you for it.

Thank goodness it’s easy to replicate those same flavors with keto ingredients. This Apple Cider Donut Cake is like one big giant donut, just waiting for you to dig in…without the resulting sugar high.

If you’re looking for something a little smaller, be sure to check out my Keto Apple Cider Donut Bites too!

Apples are not the best choice on a keto diet, as they have a surprisingly high carb content. A typical medium apple contains 25g of carbs, 19 of which are sugar.

So sitting down and eating a whole apple is not recommended. But that does not mean you have to abstain entirely from apple deliciousness.

I sometimes like to use a little bit of real apple in a recipe that contains a number of servings, like in my Keto Caramel Apple Coffee Cake. Kept to a minimum, it lends authenticity without adding much to the carb count.

Apple cider donuts don’t actually contain any apples, instead relying on apple cider for flavor. Obviously, apple cider isn’t particularly keto friendly either, but again, using a little in a cake that serves 16 boosts the flavor and authenticity in a keto apple cake.

Because we have to keep the apples and/or apple cider to a minimum in a keto apple cake, it’s important to use apple extract or flavoring as well.

I have this natural apple extract from Olive Nation, but One to One Flavors also sells a number of apple flavorings, including one specifically for apple cider. That might be a great choice for this keto apple cider donut cake.

I will say that no apple flavor I’ve tried is quite perfect, which is why I still added some real apple cider to this recipe. If you really want to avoid the apple cider, you can simply use more extract. It will save about 1g carbs per serving but the flavor won’t be quite the same.

This is an easy keto apple cake that looks like a giant apple cider donut. How fun is that? Here are my best tips to getting it right: 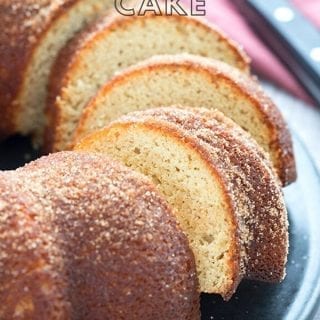