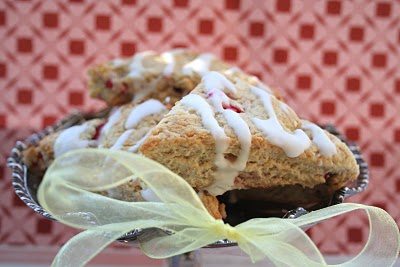 I am coming to the realization that I should have been born British. I love British food. Or rather, I love British sweets and baked goods. Who but the Brits could invent something as wonderful as sticky toffee pudding? Or that incredibly light, airy concoction known as Yorkshire pudding? And let’s face it, nobody makes chocolate bars as good as Cadbury’s. But what I really, truly love about English food is tea-time, with all of its attendant pomp and circumstance. How wonderfully civilized it is to stop mid-afternoon so you can sip tea from china cups and munch on delicate little crustless sandwiches. And the scones, oh the scones, with jam and clotted cream! I do realize that the average Brit does not eat this way everyday, if at all, but I push that thought to the edges of my mind. I’d much prefer to live in my fantasy world filled with scones and clotted cream.

I’ve loved scones since I was a little girl. I remember my mum making oatmeal scones for Christmas morning. And for the record, “mum” is not a British affectation on my part, some of us Canucks actually still say and spell it that way! I figured scones were something I’d have to give up for good, once the diabetes came along. The crumbly, slightly dry and yet tender texture of traditional scones is not something easily replicated with nut flours or flax seed meal. Thank goodness for the invention of some reduced-carb flours! I tend not to use these that frequently because I like to make many of my recipes gluten free and accessible to more people. But when it comes to scones, I am not quite willing to compromise.

So for these scones, I broke out the Carbalose Flour. I added some vital wheat gluten to help them bind and rise, and I cut both of these with a little almond flour for texture and flavour. Part of the impetus behind these scones was to see if the powdered erythritol I bought would act like sugar in a glaze/icing, so I knew I wanted a lemony glaze on these. Cranberries, at 6g of carbs per half cup, are a wonderful low carb addition to baked goods. And they are perfect for making scones as they don’t squish easily when kneading or cutting the dough. I love tart/sweet flavours, so I thought that lemon and cranberries would be a good combination. 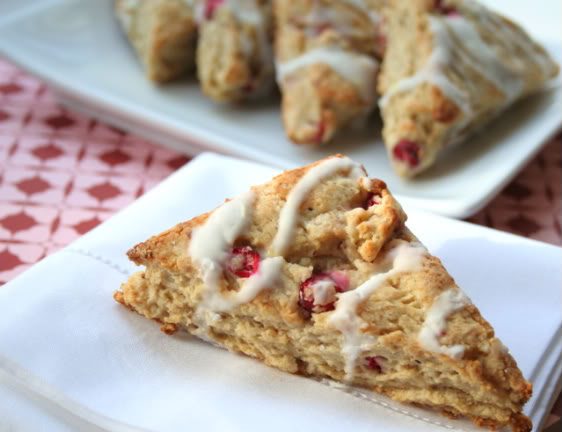 The Results: I am immensely pleased with these. The texture is the right combination of dry and crumbly while also being tender and holding together. The lemon glaze worked out exactly as I’d hoped, with the powdered erythritol playing the part of sugar perfectly. I love the tart little burst of cranberries and the light taste of the lemon zest in the scones themselves. I’ve already eaten two, because scones are never better than on the day that they are made. I would even go so far as to wager that no one would know these were low carb, if I didn’t tell them.

In the spirit of full disclosure, I will tell you that my kids did not take to them. This, however, may actually be the best endorsement. At the ages of six and four, my older two kids are in that funny stage where any taste or texture that is unfamiliar is met with immediate suspicion. They didn’t like the traditional scones I made for Christmas last year, nor the lovely carrot cake I made for a friend’s birthay, nor even the awesome full-carb apple crisp I made a few weeks ago. That apple crisp was a delight of buttery, brown-sugary goodness, and my husband was perfectly happy to have the whole thing to himself. So if my kids don’t like something, it’s a pretty safe bet that it’s actually really quite good.

Glaze:
Juice from half a lemon
3 tablespoon powdered erythritol

For the scones, preheat oven to 425F and line a large baking sheet with parchment paper.

Stir in cranberries. Stir in cream until a dough begins to form, about 30 seconds.

Turn out dough and any floury bits onto a lightly floured surface. Knead a few times until it forms a rough, sticky ball. Do not overhandle.

Shape into a rectangle and cut into 6 even squares, then cut squares diagonally to create 12 triangles. Place on prepared baking sheet and bake until tops are light golden, about 15 minutes, rotating pan halfway through baking. Transfer to a wire rack and let cool.

For the glaze, in a small bowl mix together lemon juice and powdered erythritol. Using the tip of a spoon, drizzle lightly over cooled scones. Let sit for 10 minutes to allow glaze to dry.

Serves 12. Each scone has a total of 12.9g of carbs, but only 4.5g of carbs if you subtract for erythritol and fiber.