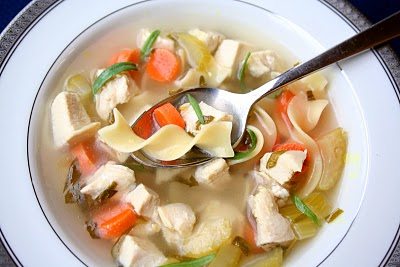 We have fresh tarragon growing out the wazoo. That’s a terribly vulgar way to put it, I know. And, depending on what you consider a wazoo to be, it would likely be considered a medical emergency if we actually did have tarragon growing out of it. But it is truly remarkable, how much fresh tarragon we have growing on our windowsill. The thyme is doing nicely, and the rosemary is too, but the tarragon is all over the place, almost crowding out the other herbs. And all the recipes I can find for tarragon take only a teaspoon or so, hardly enough to make a dent in our tarragon stockpile.

Every time I come across a good looking tarragon recipe, I bookmark it. But this soup is one that just came to me on it’s own. I was thinking how nicely lemon and tarragon go with chicken, which set me to thinking about a lemon chicken soup I’d once had long ago. It was a greek-style soup, with orzo and egg yolks, and I remember being surprised at how nice the addition of lemon was to a soup. For my own soup, I wanted a lighter broth, with noodles in it to make a heartier family meal. I found a lemon chicken soup from Giada De Laurentis that I used as a very basic guide, although I increased the overall amounts, skipped the parmesan and romano cheeses, and used egg noodles instead of spaghetti. And, obviously, added in tarragon.

Egg noodles are not exactly kind to diabetics, so for my portion, I added shirataki noodles instead. I was surprised by how well this turned out. I haven’t loved these low carb noodles heretofore, as they can be rather rubbery and have a slightly odd taste when you try to use them as pasta. But in this soup, they were perfect. The texture didn’t seem rubbery at all and the was no hint of that odd flavour. If you wanted to make the whole batch of soup low carb, you could simply add 3 or 4 packages of shirataki noodles and not miss out on anything. 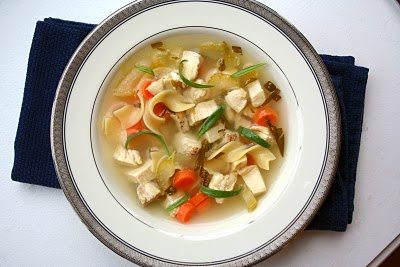 The Results: This one was a hit with the whole family. Children tend tolike chicken noodle soup, and neither the lemon nor the tarragon were overpowering enough to turn my kids off. I myself would have liked the lemon to stand out a bit more, but my husband thought the flavour was just right. It was a light, refreshing broth with the slight anise flavour from tarragon, and lovely chunks of chicken and noodles. It made an excellent dinner the first night and the leftovers were good for lunches and quick meals. 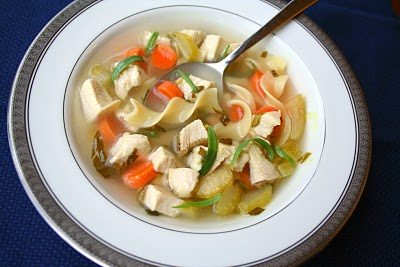