Sex in a Pan is a layered dessert that’s so rich and creamy, you’ll be in love after the first bite. Chocolate Pumpkin Sex in a Pan is a gluten-free, low carb pumpkin recipe to end all pumpkin recipes! An almond flour crust holds layers of pumpkin cheesecake filling, creamy chocolate pudding, and sugar-free whipped topping with shaved chocolate on top.

The pumpkins are coming, the pumpkins are coming! Whoops, too late. The pumpkin recipes are HERE! And if you’re not a pumpkin lover or if you would prefer to not see any pumpkin-related content until at least October, I am sorry. I truly am. But they seem to arrive earlier and earlier every year now.

Even before summer is over, before the kids are back in school, and while you are still embalming yourself with sunscreen every day,  your social media feeds begin to clog up with pumpkin recipes. It’s atrocious, it really is. And I blame bloggers. Yes, bloggers! Those damn fools that worship the big orange gourd and can’t even wait until the beginning of September to start cranking out the pumpkin spice this and the pumpkin pie that. Yes, I include myself in that lot of wild-eyed pumpkin addicts. It’s a sickness, it really is. And there is no antidote. 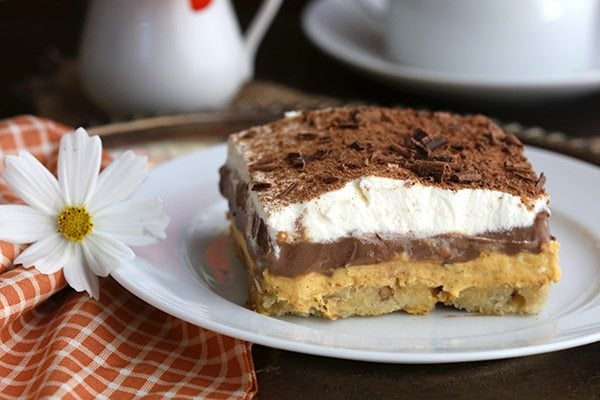 Well, at least I waited until after Labour Day to publish my first pumpkin recipe this year. That’s something, right? And what a recipe it is, with quite the, ahem, suggestive name. Sorry if it offends.

Is Sex in a Pan really the name?

Sex in a Pan is meant simply to be tongue in cheek, but if you don’t like that moniker, there are a few alternative names for this sinfully delicious pumpkin chocolate layered dessert recipe. Like Low Carb Chocolate Pumpkin Lasagna. Or Chocolate Pumpkin Dream Dessert. Or the rather boring but descriptive Pumpkin Chocolate Layered Dessert.

I settled on Sex In A Pan because that’s what a reader called it when she asked me to make something similar. And it reminded me of a dessert a friend made back in high school, although she called hers “Better Than Sex”. Which, being rowdy teenagers, we though was hysterical. It was also delicious!

The high carb version of Sex in a Pan usually has a shortbread-like crust, with layers of vanilla pudding, chocolate pudding and whipped topping. Most of which comes out of a box, of course. But making a low carb layered dessert from scratch is not only healthier, but a lot of fun. And you get to lick the beaters and the bowls of all the various layers. Can’t complain about that! 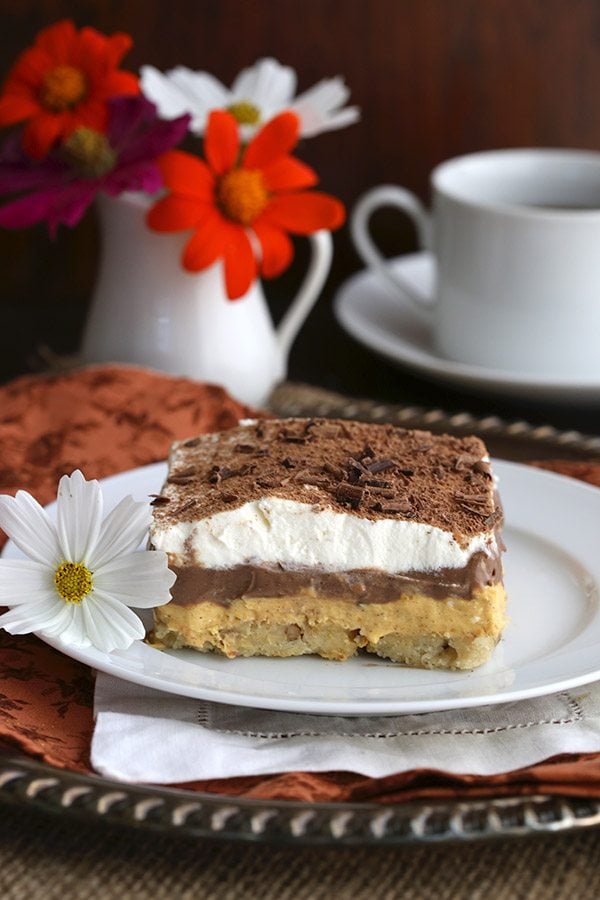 The combination of chocolate and pumpkin can be found in all sorts of gluten-free, sugar-free and low carb dessert recipes. A few of my favorites include:

Just be forewarned about one thing. There is absolutely NO WAY to get the first slice of this beauty out of the pan in one piece. You have to resign yourself to sacrificing that one piece in order to get the others out all nicely sliced up. If you happen to be serving to guests, just delicately remove yourself from their view as you cut into it.

Pull out that first mangled, mashed slice of Sex in a Pan in whatever manner you can get it out, and hide it back in the fridge for later. Then you’ll be able to lift the other slices from the bottom and no one will be the wiser. Well, except when you walk back into the dining room with smears of chocolate, pumpkin and whipped cream all over your face…

Did you know I wrote a cookbook? Get it now! 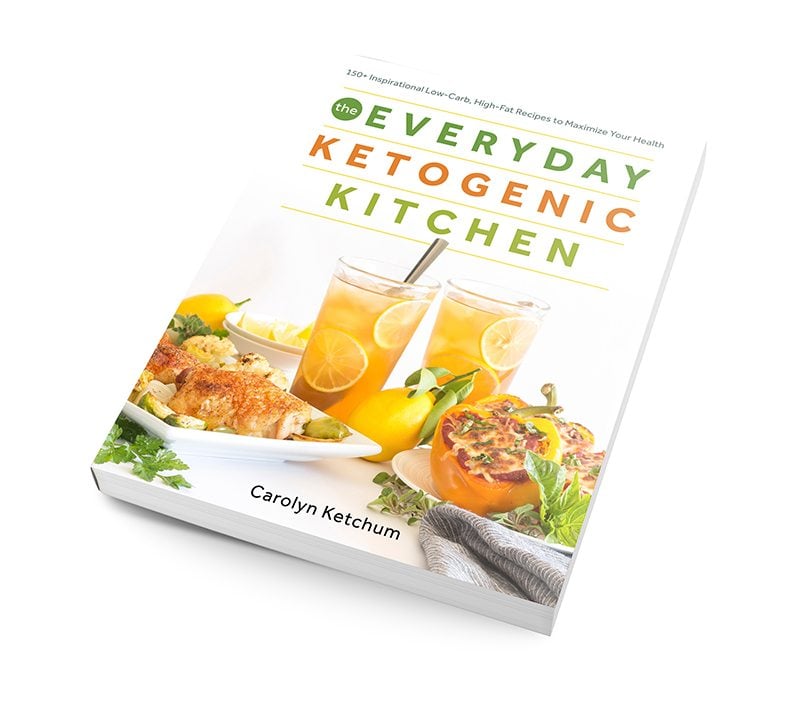 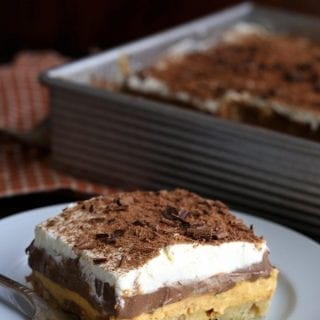 Pumpkin Sex In A Pan Dessert 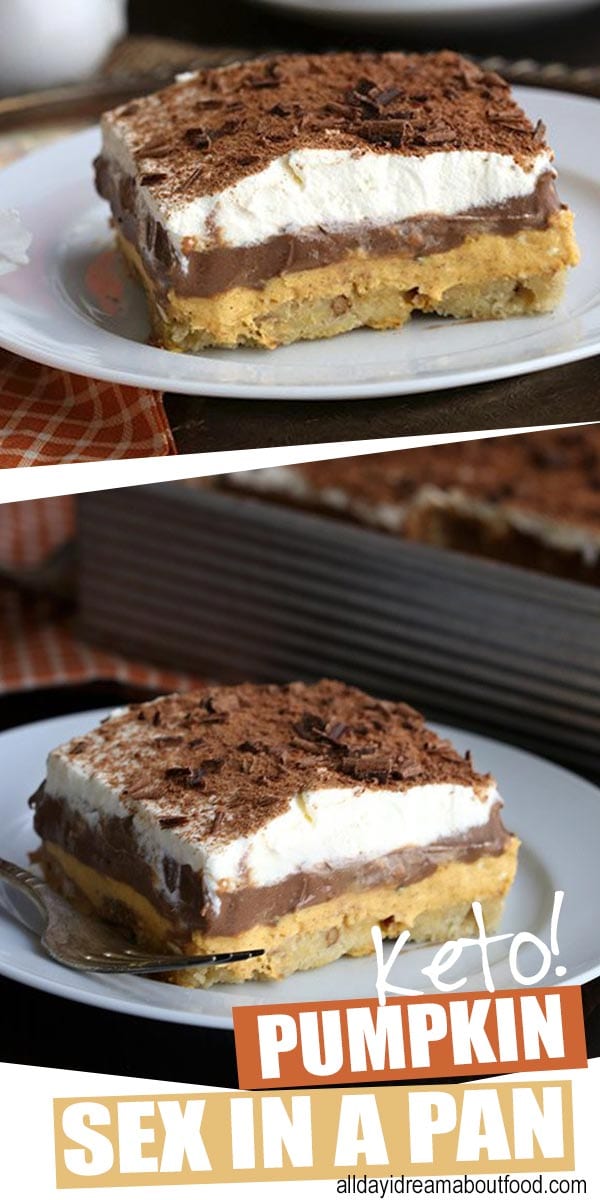