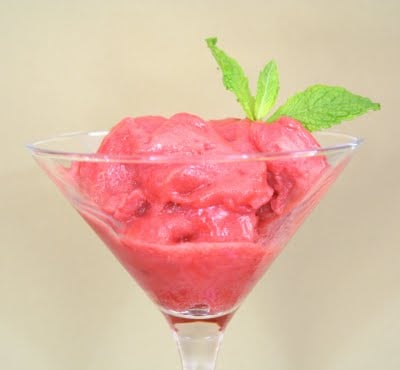 It’s rhubarb season! You have no idea how excited this makes me. I am ridiculously in love with the taste of rhubarb. It is a lifelong love, stemming from my childhood on a farm in southern Ontario where we had a large patch of the leafy vegetable. My mother had several wonderful rhubarb recipes, and I was particularly fond of her rhubarb crisp. It was so tangy and so sweet all at once, with a rich brown sugar crumb topping. A bowl of warm crisp with a scoop of vanilla ice cream was pure heaven. As a little boy, my brother loved rhubarb so much he once attempted to eat some of it raw, an experience he never dared to repeat. He didn’t eat the leaves, which are quite toxic, but he did have a serious stomachache for a while. Raw rhubarb is not recommended!

Last year, I had a heck of a time finding fresh rhubarb. I scoured several grocery stores and farmstands and finally found a small collection of rather withered stalks. They didn’t look too fresh, but I bought some anyway, for fear of not finding anything better. A few days later, we were picking early strawberries at a local farm, and I found that their stand had some lovely, fresh rhubarb stalks. I have to confess, I went a little wild and bought about 4 pounds, hoarding the beloved vegetable against future rhubarb shortages. I made a few recipes but I also chopped up quite a bit and froze it. And boy, was I glad I did. What a treat to have some rhubarb to eat during our long, harsh winter. 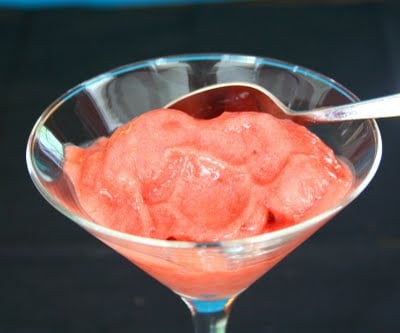 I went out with a friend for dinner once and had a gorgeous dessert of rhubarb sorbet in champagne. I’d never thought of rhubarb as a candidate for sorbet, but it turns out that sorbet is actually a perfect vehicle for the tart rhubarb flavour. I got thinking about that dessert recently, and decided I needed to give it a go. What is rhubarb sorbet, after all, but frozen rhubarb sauce? And I certainly know how to make rhubarb sauce! Since my sorbet would be sugarless, I did rely on a trick I’ve read about a few times now, in the hopes of countering any iciness that might arise. This little “trick” is to add a few tablespoons of alcohol to the mix, since it helps keep liquids from freezing solid, an important quality in the absence of sugar. In this case, I chose vodka because it doesn’t have much flavour on it’s own. This is meant to be a family friendly treat, after all! 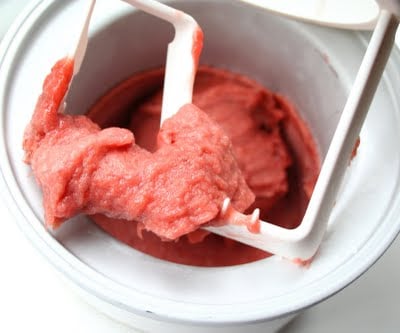 The Results: Rhubarb heaven! Really, if you like rhubarb, you will find this heavenly. The rhubarb flavour just seems to be intensified through the cooking and then the freezing. It’s actually a miracle that any made it to the freezing process, as the taste of the puree was so good, I wanted to eat the whole batch. And the texture was creamy and not at all icy, so it would seem that the vodka did the trick. The pictures make it look more melty than it actually was…I was working as quickly as I could to get decent photos but it’s not easy when working with ice cream or sorbet!

As with any non-commercial ice cream, it is best enjoyed when freshly made, as the leftovers did freeze very hard and had to be left out for a while before you could even dent the surface with a spoon. So if you are making this just for one or two people, make a half-batch. But whether you make this low carb or with sugar, just make it! It is pure rhubarb heaven.

I have learned through experience that the trick to successfully making ice cream at home is to thoroughly freeze the ice-cream canister and thoroughly chill the puree or custard before proceeding. Don’t skimp on these steps, as I have been known to do, or you will end up with a soupy mess that doesn’t churn properly. My Cuisinart ice cream canister needs to be frozen for a good 12 hours, so I often just keep it in the freezer. 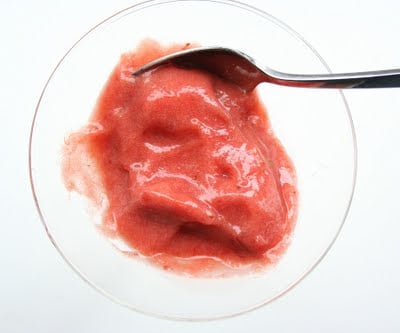 Combine rhubarb, water, erythritol and lemon juice in a large saucepan over medium heat. Bring to a boil and cook until rhubarb is very soft, about 10 minutes.

Transfer mixture to a blender or food processor, or use an immersion blender, and process until smooth. Refrigerate until completely chilled, at least 3 hours.

Stir in vodka and stevia. Transfer mixture to freezer bowl of ice cream maker and churn according to manufacturer’s directions until creamy and thick. Transfer to an airtight container and press plastic wrap to the surface. Freeze until firm to the touch but not hard, 1 to 2 hours. Serve immediately.

Serves 6. Each serving has 20g total carbs but only 4g when subtracting erythritol.