These keto snickerdoodle blondies are a delicious way to indulge your craving for sweet cinnamon cookies. Tender almond flour bars with a sugar-free cinnamon topping. 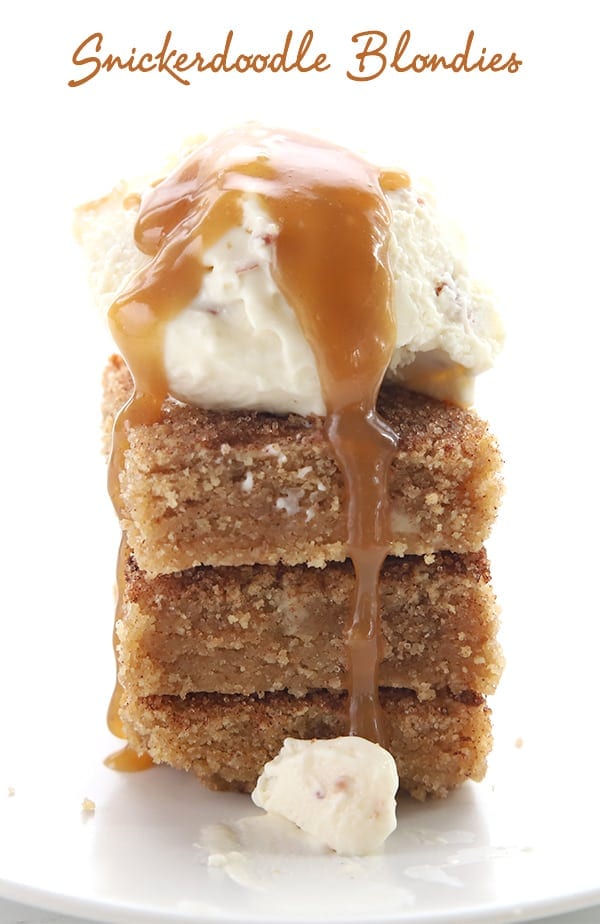 To me, Snickerdoodles are a quintessentially American treat. I had never even heard of them until I moved to the US for graduate school and was perusing a cookie baking book. The name made me giggle, to be honest. Or should I say…it made me snicker? But it definitely didn’t make me doodle.

But these soft, sweet cookies have quickly found a place in my heart. Honestly, how can you go wrong with melt in your mouth cookies dredged in a coating of cinnamon sugar? Also be sure to check out my classic keto snickerdoodles too! 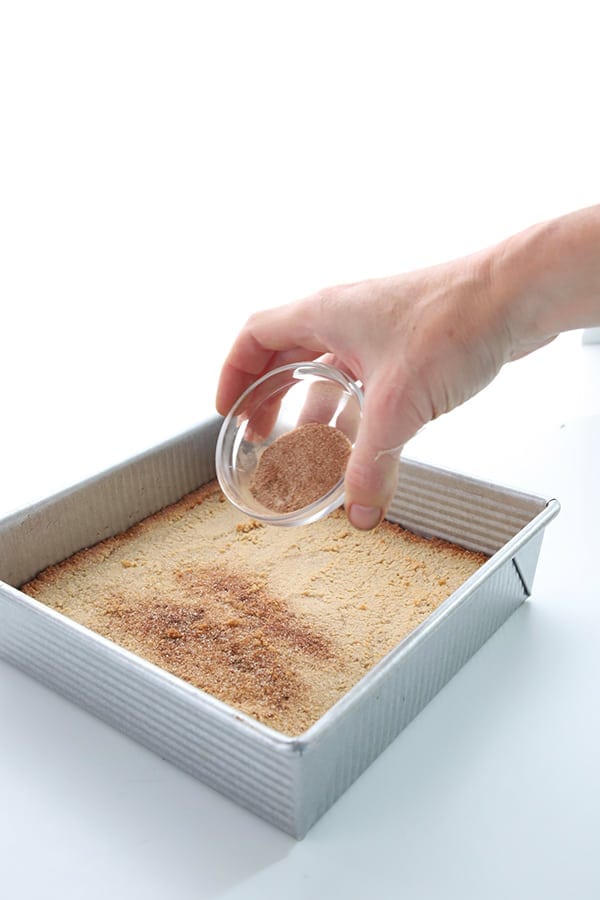 It’s been fun trying to come up with variations of snickerdoodles that are keto friendly. I first came up with these easy Snickerdoodle Blondies way back in 2012, when I was part of a fun blogging group called the Secret Recipe Club. We would be assigned another person’s blog and we had to make something inspired by their recipes. The inspiration for these bars came from The Cookaholic Wife.

But since that long ago time, my low carb baking skills have improved dramatically. These were pretty tasty bars way back then and they’ve been a reader favorite for a long time. But I always felt that they didn’t have the right texture. So I recently set about to re-make and improve them. 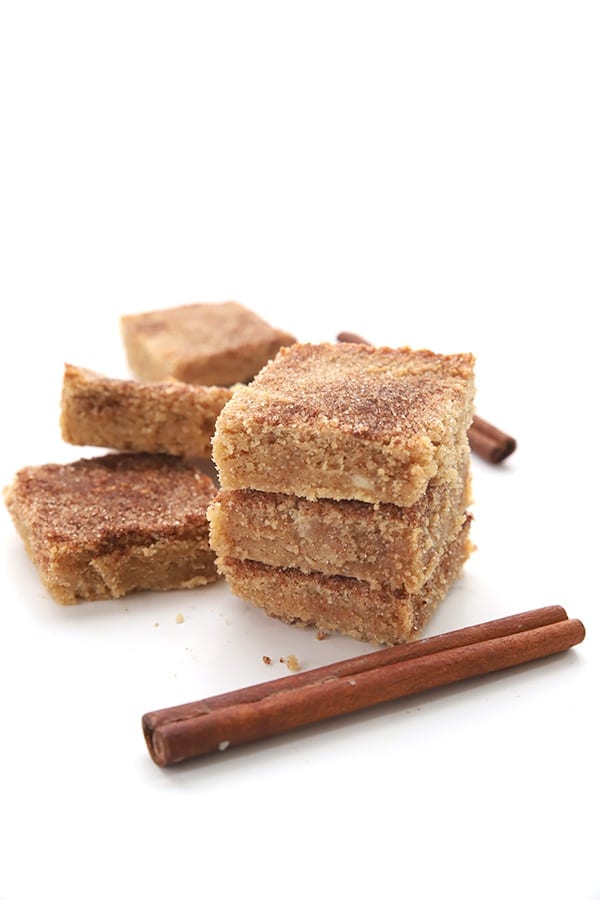 Use Cream of Tartar:

I didn’t change much in terms of the flavor profile. Snickerdoodles are unique among cookies because they contain cream of tartar. If you don’t have cream of tartar, I urge you to go get some. You will find it in the spice aisle of your local grocery store and it’s actually a byproduct of wine making. It’s a dry powdery acid and when combined with baking soda, it produces carbon dioxide to help baked goods rise. Which gives snickerdoodles their classic pillowy softness.

Cream of tartar also helps egg whites whip into shape, because it stabilizes the air bubbles. I always use some when I make low carb meringues.

When I first made these, they had 3 eggs. Which made them cakier and less dense than true blondies. This was early on in my keto baking days and I thought I needed the eggs for the bars to hold together. But I’ve since found that it’s not necessary to have so many eggs and I can get a better result with only one. So I reduced the number of eggs and got just the right snickerdoodle blondie texture.

Finally, I pulled out a trick that I’ve learned only in the past year, but that seems to make a difference in low carb cookies. Adding a tablespoon of grassfed gelatin can really help give keto baked goods the chewiness we are all looking for. In the low carb world, we have to come up with a lot of interesting work arounds to get the right texture and flavor for classic desserts. This little trick really works and I’ve used it in a few recipes, including my Chewy Ginger Cookies and my Keto Brownies.

Well, I have to say that tackling Snickerdoodle Blondies again was a great success. They were soft and a bit chewy, and had all the wonderful flavor of a classic Snickerdoodle. We took them on a late summer getaway and topped them with keto vanilla ice cream and some of my sugar-free caramel sauce. The kids couldn’t get enough of it! It was a decadent low carb dessert. 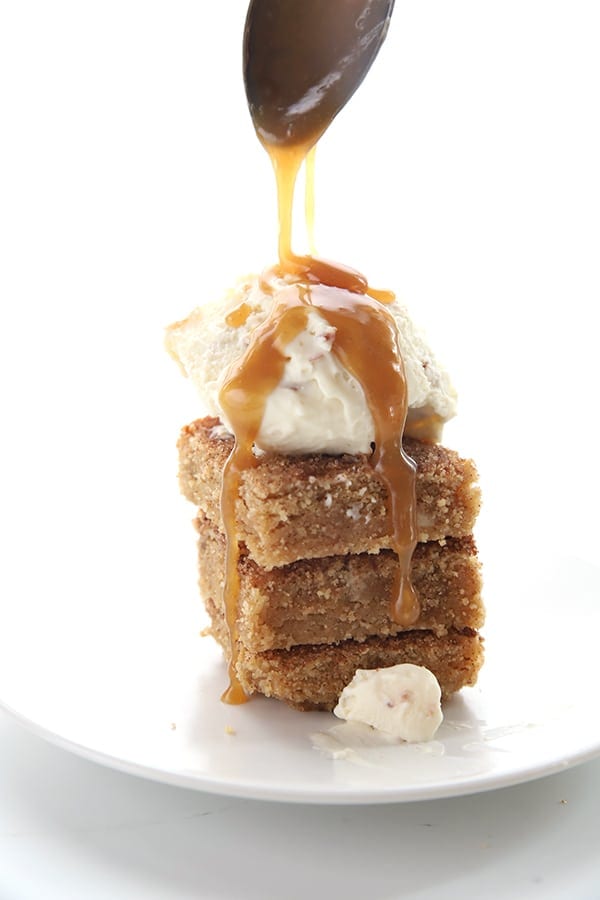 If you just want some Snickerdoodle Cookies, try these Gluten-Free Snickerdoodles. They just need a change of sweetener to be keto-friendly! 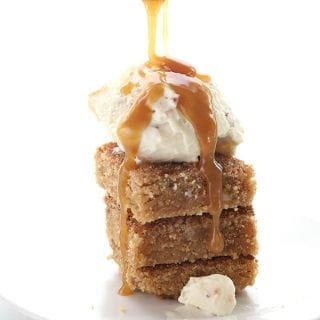