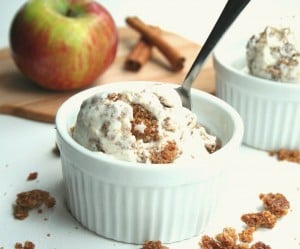 It may not officially be fall, but fall is definitely in the air.  I can feel it.  I can smell it.  I swear I can almost taste it. That’s probably because I’ve gotten a jump on making fall recipes, but really, can you blame me?  It was a long, hot summer.  Very long, and very, very hot by New England standards.  I’ve been wearing shorts and t-shirts since about mid-April and I am utterly sick of them.  So it’s a relief to feel some coolness in the air now.  We’ve had our windows open at night and I was actually a bit too chilly last night.  And I love it.

There is no flavour more reminiscent of fall than that of apples.  I love apples, perhaps more than I can say.  I come from the land of the McIntosh, first discovered and cultivated in rural Ontario.  If they sit around, Macs can become very mealy, but take a bite of one straight from the tree, and you are in apple heaven.  Crisp and tart and clean.  As a kid, I could eat my weight in apples when we went apple-picking.  I probably took more home in my tummy than I did in the bag. 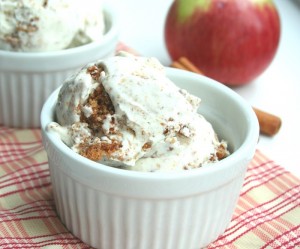 Apples aren’t exactly diabetic friendly.  For such a tart-tasting fruit, they are surprisingly high in sugar.  These days I only allow myself a small apple at a time, or half of one if it’s on the larger side.  But I will never give up eating apples.  Even if I had to run 20 miles to work off the sugars, I’d still eat apples for the sheer autumnal pleasure of it.  Still, it’s not like I can indulge the way I used to.  And heretofore, I never would have considered an apple an indulgence at all!

Earlier this summer, my husband and I took a trip to Maine and came across a delightful little kitchen store in Portland.  I easily could have spent hours in there browsing, and probably could have spent hundreds of dollars as well.  As it was, we bought a few fun items to bring home with us, among them a number of interesting LorAnn candy and baking oils.  I’d never seen these tiny bottles of super strength flavourings before, but I instantly recognized their benefits for low carb baking.  Most of the flavours are sugar and gluten-free, and are much more concentrated than typical extracts so a very little goes a long way.  And they can allow me to play with some of my favourite flavours, without having the carbs add up.  I brought home Apple, Butterscotch, Rootbeer, Coconut and Cherry.  And I have my eye on a number of others from their website, they have an amazing selection. 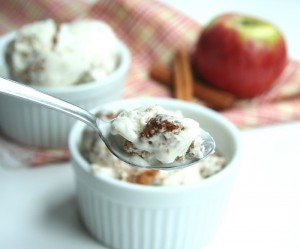 And as we head into fall, I thought it might be fun to do a fall-themed ice cream.  Apple crisp anyone?  The traditional version is not exactly low carb or gluten free.  But apple-flavoured ice cream with cinnamon-y, crunchy little bits makes a great substitute! 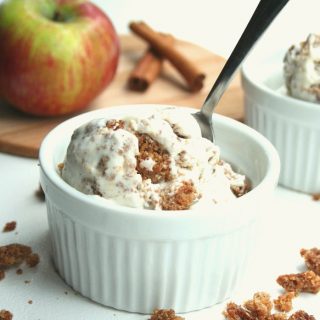