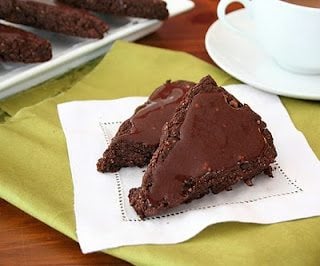 I used to say that there were only two foods I didn’t like – beets and ginger. But the ginger part of that statement came with qualifications. I’ve always like sweet gingery things, like ginger ale and gingersnaps. I just didn’t like chunks of ginger in my food. And candied ginger was utterly abhorrent to me. I remember once biting into what appeared to be a lovely chocolate, and getting a mouthful of soapy-tasting candied ginger. It was awful! But over the past few years, I’ve come to quite like ginger, including the candied variety. I don’t know how the change from that utter distaste came about, I just know that I was willing to give it a second chance and found that it wasn’t so bad after all. In fact, I found it was quite nice and I started adding ginger to my recipes, both sweet and savoury. (I still don’t like beets, though, and I am not ready to give them a second chance.)

Of course, candied ginger isn’t exactly low carb, being soaked in sugar-water and then rolled in sugar. Until now, that is! See, I became tired of foregoing recipes that included crystallized ginger, and I decided to experiment. It was a scone recipe from Cookin’ Canuck that led me to see if I could make low carb crystallized ginger. When I saw a link to her Crystallized Ginger and Chocolate Scones, I may have swooned. Hers was a basic cream scone with chunks of ginger and chocolate and it was lovely, but I instantly started envisioning a chocolate scone base with ginger and perhaps a chocolate glaze. 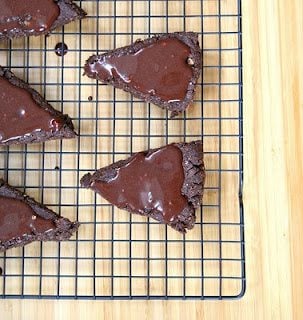 But the obstacle was the ginger. At first, I considered just putting in a very small portion of regular candied ginger, but I knew that wouldn’t give it enough oomph. To compete with the chocolate, there had to be a sufficient amount of gingery bite coming through and I wasn’t going to get that with a few tablespoons of ginger. So, it was time to put my favourite sweetener to the task and see if I could create low carb crystallized ginger with erythritol. Would it get sufficiently sweet? Would it dry out properly and become preserved, the way it does with sugar? And would it taste any good in chocolate scones? 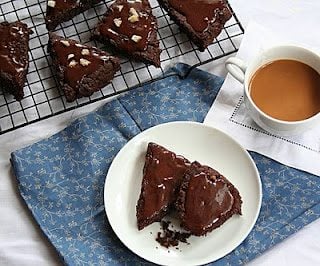 The Results: First, the ginger. I am thrilled to tell you that it worked VERY well. I followed the basic instructions for making homemade crystallized ginger from The Kitchn, except that I cut down the amounts by two thirds. I did not want to waste the expensive ingredients if it wasn’t going to work. I also sliced my ginger very thin on a mandolin slicer, to get even thickness. I will say that it’s probably not quite as sweet as the sort made with ginger, and a piece of it on its own has quite a gingery kick. But it’s perfect to hold its own in a baked good like chocolate scones.

And now to the scones. It’s funny to me that in my youth I thought putting ginger in chocolate was akin to sacrilege, because now I love it. Adore it. And I loved these scones. The glaze really wasn’t necessary to make them good, I just liked the look of it. It made them prettier. And chocolatey-er (more chocolatey?), which is always a good thing. It felt very decadent to eat them for breakfast. My kids quite liked them, although I would find a little pile of ginger bits on their plates afterward.

So, lucky you. You are getting two recipes for the price of one today. Enjoy! 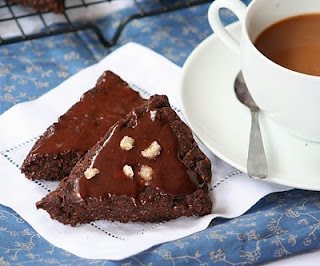 In a small saucepan, bring water and ½ cup erythritol to a boil, stirring until erythritol dissolves. Add ginger and lower heat. Simmer for 20 minutes.

With a slotted spoon, transfer ginger to a wire rack set over a cookie sheet. Let cool 10 minutes.

Place remaining erythritol in small bowl. Dip each piece of ginger in erythritol, covering completely. Shake of excess and return to rack until dry, about 3 hours. Store in an airtight container*.

*Not sure yet how well preserved it is and how long it can be stored, but mine has been on my counter for 2 weeks and looks good! Also, don’t toss the liquid you boiled the ginger in, it makes a great ginger syrup for drinks and cocktails. In the fridge, some of the erythritol will crystallize out, but it’s still really great.

For the scones, line a baking sheet with parchment paper and preheat oven to 325F. Whisk together almond flour, cocoa powder, erythritol, baking powder, and salt in a large bowl. Add ginger, making sure to break up any bits that clump together so it is well distributed. Add in the coconut oil, egg, cream, vanilla extract and stevia extract until dough comes together.

Turn out dough onto parchment-lined baking sheet and shape by hand into a rough circle, 7 or 8 inches in diameter. Slice into 8 even wedges and separate carefully, then space evenly around the baking sheet. Bake 20 to 25 minutes, or until scones are firm and lightly browned. Keep an eye on the bottoms to make sure they don’t burn.

Remove from oven, transfer to a wire rack and let cool.

For the glaze, whisk all ingredients in a small bowl until smooth. Drizzle or spread onto cooled scones.

**The total carbs of the crystallized ginger comes to about 4g per ¼ cup.