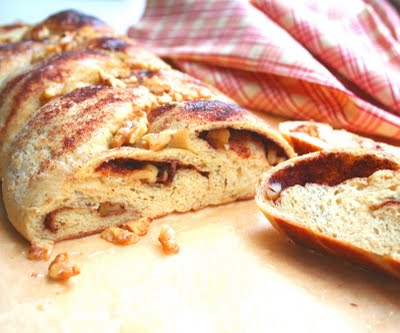 What I really like are big pictures that look like they took a lot of small stuff, but didn’t really. That’s my kind of project. Because then I can focus on the final product without feeling guilty for not sweating the details along the way. And then people compliment me and tell me what a great job I did, and I can just smile and nod and let the praise wash over me. Or I can protest and tell people how easy it all really was, and they think I am being modest or self-deprecating, and think all the more highly of me for it. Yes, those are the projects I like best. 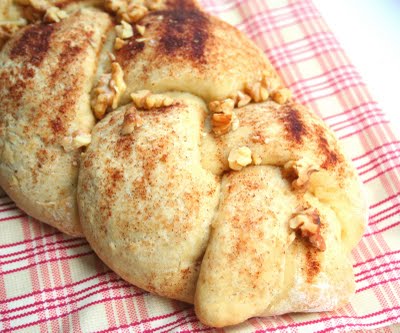 So don’t look to me for the intricately frosted cakes or the sugar cookies with delicate designs in royal icing. I can admire these things and their creators for the patience and attention to detail, but I will never dare tackle them myself. I would likely rush through something and ruin the whole batch, or be throwing my hands up in frustration midway through the project. If you think something I have produced looks like it took a lot of steps and a lot of work…think again. It probably didn’t, I just make it look that way. I am not a detail-oriented person, I just play one on my blog. 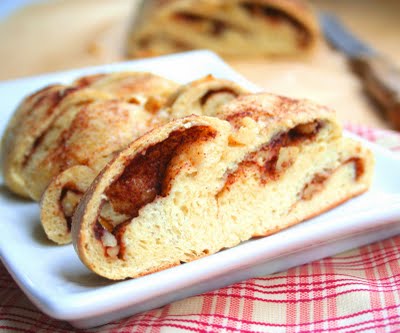 Like this bread. I am enormously pleased with how it turned out for a number of reasons. Reason number one is that I was using yeast that had an expiration date of 2007. A detail-oriented person would have cleared that out of her pantry by 2008 at the latest! Reason number two is that I was using carbalose flour in a sweet dough and I really wasn’t sure how it would taste. Carbalose flour, a flour modified to be low carb, has been infinitely useful to me but it does have something of a sour flavour that lends itself better to savoury baked goods. Reason number three is that I was attempting braided bread, which I have never done before. I had a vision of what I wanted to create, with no real clue of how to to accomplish it. I knew what filling I wanted, and that I wanted to adapt the dough recipe from my Feta and Spinach Rolls, but I had to do a bit of research to figure out how to shape and fill the bread. 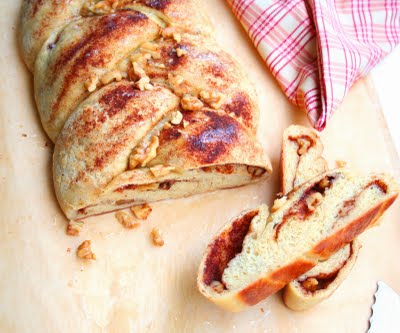 The Results: Well, thank goodness the yeast was still active, because that was the detail that could have sunk the whole project. As it was, the dough rose, and to my surprise, there wasn’t a hint of sourness to the finished bread. To say that this bread exceeded my expectations is putting it mildly, because I love it. My children love it too. On the day it was made, my son was hovering over me as I was taking photos, asking for a piece. And when he had finished the first piece, he asked for another. And another. I wouldn’t hesitate to bring this to a fine brunch. I might make the glaze a little thicker, because it disappeared into the bread and visually, I think drizzles of white glaze might make it that much prettier. But for taste and looks, I give this recipe top marks.

If you have no need of being low carb and want to make this, I direct you to the original dough recipe on A Little Bit of Everything. Halve the recipe (or double the filling) and add a few tablespoons of sugar to the dough. Replace all erythritol in my filling and glaze with sugar or icing sugar, and you will be all set! 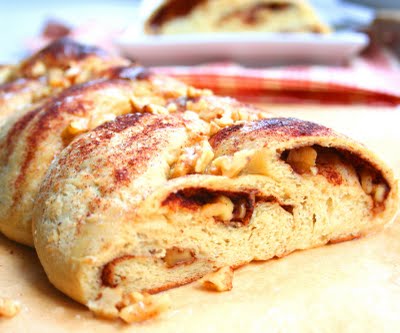 For the dough, preheat oven to 200F for 10 minutes and then turn oven off.

In a medium bowl, stir together carbalose flour, gluten flour, granulated erythritol and salt. Set aside

In the bowl of your mixer, combine milk and water. Sprinkle yeast over and mix well. Mix in egg until combined.

With the mixer on low speed, slowly add flour mixture until combined. Dough may be quite sticky, but do not add any more flour.

With greased hands, shape dough into a smooth ball and place in a lightly greased bowl. Cover tightly with plastic wrap. Place in warm oven for 30-45 minutes, or until doubled in size.

For the filling, combine granulated erythritol and cinnamon together in a small bowl.

Divide dough into three equal pieces and roll each piece into a long skinny rectangle, about 12 inches by 4 inches. Brush each piece with ½ tablespoon of butter and sprinkle each with a quarter of the cinnamon mixture (reserving last quarter for top of bread). Sprinkle each piece with a quarter of the walnuts. Roll up each rectangle tightly so it forms a long skinny log and pinch the seam closed.

Line a large baking sheet with parchment paper. Set each strand side by side with the seam on the bottom. Bring the ends together and then begin braiding the strands together. You can tuck the ends under neatly once you have finished the braid.

Place the braided bread back in the warm oven to rise for another 20 to 30 more minutes, until doubled.

For the glaze, whisk powdered erythritol and almond milk together until smooth. Drizzle over cooled bread. Slice and enjoy!