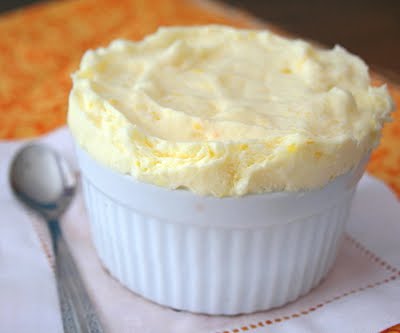 You may have heard that we had a hurricane here in the Boston area over the weekend. Except we didn’t, really. By the time Irene arrived in Beantown, she was considerably weakened and downgraded to a still-potentially dangerous tropical storm. And for those of us who don’t live in seashore communities, her effects were pretty mild. At our house, there was some gusty wind, lots of rain, and a few large tree branches in our yard. That was it. So was it worth all the hype? I certainly think so. After Katrina, community leaders can’t afford to be complacent. They need to be proactive instead of reactive when facing a storm such as this. So we heeded their advice and took some precautions, filled containers with drinking water, cleared our patio of furniture, grill and potted plants, and made sure we had flashlights, batteries, and transistor radio at the ready. All of these measures turned out to be unnecessary, but that, of course, is a good thing.

We also spent most of Saturday cooking our little hearts out. This wasn’t hurricane prep so much as we just felt like it. I picked every single tomato from our garden that even a hint of colour, thinking that I’d rather them ripen inside than end up blowing away in fierce winds. With those that were fully ripe, plus a few pounds from the farmer’s market, I canned tomatoes to have some for the winter. I also made some lovely gazpacho for dinner. My husband made burgers with the intention of grilling them, but it had already begun raining by Saturday afternoon, so they were cooked on the stovetop. We cooked some ribs too, having found some on sale at the grocery store. And I made a lovely frozen treat that I’d had my eye on for quite some time. 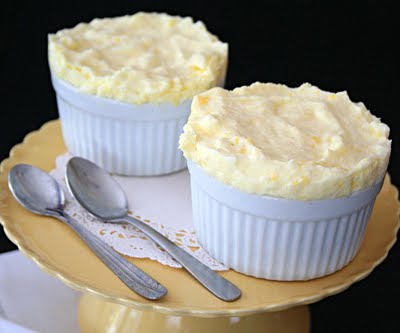 The inspiration for this came from a cookbook I was given at my bridal shower. It’s crazy to think that this was almost 10 years ago! It’s one of those gorgeous, picture-filled cookbooks from Williams-Sonoma, simply titled “Dessert”. One of my good childhood friends knew that such a book would appeal to me greatly, and it certainly did. I haven’t actually made that many items from it, but it’s one of those books that is just a pleasure to look at and thumb through. And I happened to be thumbing through it this summer, when the recipe caught my eye as a perfect candidate for a low carb makeover.

There was so much to love about the recipe, the elegance of it, the way the mousse rose above the rim of the ramekin so perfectly. And the fact that two of the main ingredients, eggs and cream, are staples in any low carb pantry. But to my eyes, there were also a few unnecessary steps in the instructions, like using room temperature eggs, and stirring the citrus curd frequently while it cooled. The latter would have been particularly hard to do, since the instructions also said to lay plastic wrap flush to the surface, which would mean removing and replacing the plastic wrap constantly while trying to stir. So, as always, I did it in a way that made more sense to me. But I did take the time to fit the ramekins with parchment-paper collars, so I could get the mousse to rise perfectly above the rim of the cups. I also cut the recipe down to 4 servings, since this sort of dessert is best served as fresh as possible. 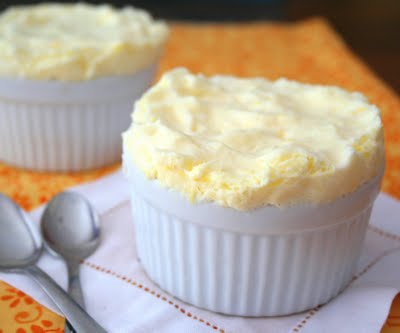 The Results: I knew using chilled eggs would work just fine! And I knew that stirring the curd would be unnecessary. My version was truly lovely, an elegant, rich dessert that tastes light and citrusy. Creating little collars for the ramekins is technically unnecessary too, you could simply spoon the mousse into mounds above the rim. But if you have the time to do the collars, I would say to do it. Especially if you are having company, it somehow makes the final product look more impressive.

I will say, if you are going to make these ahead of time and freeze them for longer than a few hours, they will harden up considerably. Be sure to let them soften in the refrigerator for an hour or so before serving. 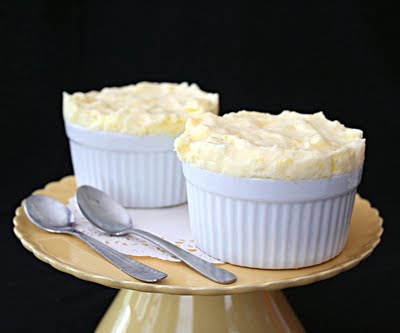 In a medium glass or metal bowl, whisk together the egg yolks, lemon juice, stevia and salt. Set over a saucepan of barely simmering water, but do not allow bottom of bowl to touch water. Whisk constantly until mixture just begins to thicken, 8-12 minutes. Remove the bowl from the saucepan, add citrus zest, and continue to stir until mixture is thick enough to coat the back of a spoon. Press a piece of plastic wrap flush to the surface of the curd and refrigerate until completely chilled, at least 2 hours.

When curd is chilled, whip cream in a large bowl until stiff peaks form when beaters are lifted. In another large bowl, combine egg whites and cream of tartar. With clean beaters, beat the whites until foamy. Gradually add erythritol and continue to beat stiff but not dry.

Whisk the lemon mixture until smooth and add to whipped cream, folding in gently until just combined. Add the egg whites and fold in until combined. Divide mixture among prepared ramekins.

Freeze mousse 2 hours, until firm but not rock hard. Remove collars and serve.

Any portions that do not get eaten after 2 hours of freezing should be wrapped tightly in plastic to avoid freezer burn. Let soften in refrigerator for half an hour to an hour before serving.

*Use Safest Choice Pasteurized Shell Eggs if you are concerned about the consumption of raw egg whites.