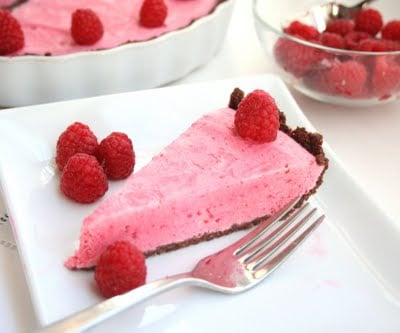 You know you have good friends when they feel comfortable enough to invite themselves over. And I mean that sincerely. I think it’s a wonderful thing, as long as you don’t feel any obligation to say yes if you really don’t want company. We weren’t planning to have any one over this weekend, but when friends suggested that they bring their infant son over on Saturday and we order pizza, it felt right. And since they too have children, they know the importance of getting together early and going home early enough to get the kids into bed. I was so glad that they suggested it, as it broke up what could otherwise be a rather monotonous day. It also gave me the chance to put together a dessert I’d been thinking of, one that might have been a little much for just the family alone.

You might have noticed that I bake pretty darn frequently. Perhaps more frequently than even my blog suggests, since I am also working on a few other projects and I don’t post everything I make. Which means that there is always one (or three) baked goods on the go around here. To lessen the impact on my family’s waistline, I make things in half-batches. I make 6 muffins instead of 12, but I write up the recipe for the full dozen. I make bars in a loaf pan and then double the recipe for an 8x8square pan. Because make no mistake…I may post things that are low carb and gluten free, but they are far from low fat or low calorie! Decadence might just be my middle name. 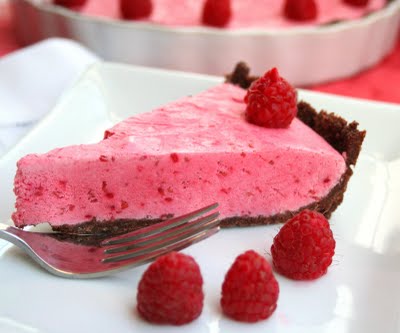 But some things need to be made full size. I suppose this tart could have been tartlets, but that might have change the proportions of the crust and the mousse somewhat. Besides, the vision in my head was full size and I really thought it would be lovely that way. So a visit from our friends was a perfect excuse to put together the full dessert so that we could have some help making our way through it. I would even have sent them home with some but frozen mousse plus a 30 minute car ride back to Brookline might have meant lurid pink raspberry goo all over their car. I want to keep them as friends, mind you, so that they feel comfortable enough to invite themselves over another day. 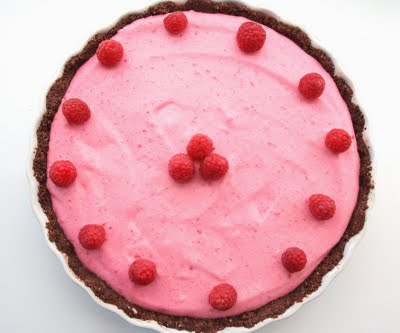 The Results: I totally loved this, and it got thumbs up from our friends as well. It was fresh and creamy and tasted like summer. I didn’t go with fresh raspberries for the mousse itself, I don’t like to pay the exorbitant prices at this time of year, but the frozen ones worked just as well. I didn’t go wild with sweetener either, as I wanted the natural sweetness of the raspberries to come through, and I think that they did. And I thought that the chocolate crumb crust was a nice compliment to the tart berries. My middle child adored this, although that may in part be due to the lurid pink (her favourite colour) of the filling. My son was so-so on it but my littlest one gobbled it up and she’s the hardest to please.

I would make this again in a heartbeat. It’s quite easy, looks lovely and tastes like raspberry ice cream. In fact, I would happily make it without the crust too, as an “easy” alternative to ice cream, no custard or churning needed. 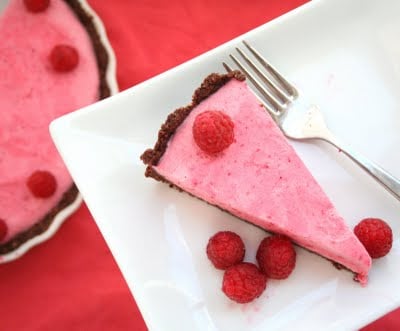 For the crust, preheat the oven to 350F.

In a medium bowl, whisk together almond flour, cocoa powder and erythritol. Stir in melted butter until it begins to clump together. Using your fingers, press firmly and evenly into a 9-inch tart pan or pie pan.

For the mousse, puree raspberries, powdered erythritol and chambord together in a food processor.

Beat whipping cream and stevia with an electric mixture until stiff peaks form. Stir in sour cream until just combined. Fold in raspberry puree gently but thoroughly. Spread raspberry mixture into cooled crust and freeze until set, at least 2 hours.

One to two hours prior to serving, put tart in refrigerator to thaw slightly.