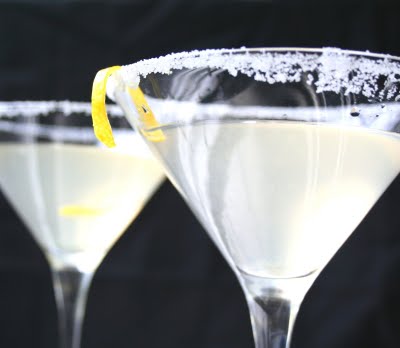 Sometimes a girl just needs a cocktail, the sort that comes in a trendy glass in a trendy bar in the downtown of a trendy city. Last Friday was that day for me, a day filled with the exuberance of decidedly non-trendy children in a decidedly non-trendy suburb. There wasn’t anything particularly bad about the day, there just wasn’t anything particularly good about it either, and as it waned, I wanted to treat myself to a drink. And not just any old drink, but the sort that might have been downed by the girls of Sex and the City. Since I had no girl’s night on the horizon, I decided to take matters into my own hands.

I had a couple of flavour combinations in mind, but not being a “mixoligist”, I thought I should do a little research before throwing things together. A google search elicited several possibilities, but none were quite to my liking. I knew I wanted my martini with gin, and everything I found was based on vodka. But I decided to forge ahead anyway, and see if the flavour I settled on, Ginger Lemon, would mix well with gin. Gin has more presence than vodka, with its evergreen juniper scent, and people either love it or hate it. I fall into the first group. 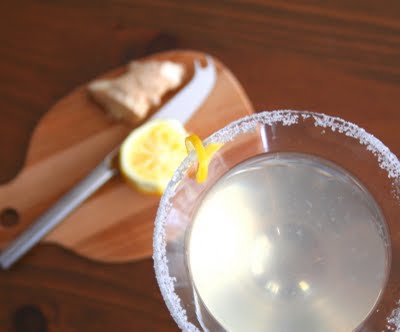 Another possible issue was that this drink was surely going to have to be made with sugar. I’ve tried some of my other sweeteners in alcoholic drinks and have found that it doesn’t really mix well and leaves a funny aftertaste that makes me feel ill. However, alcohol has the funny side effect of lowering my blood sugar and can offset the sugar in a drink. I don’t take advantage of this fact very often but decided that, for sanity’s sake, I was going to allow myself my tasty cocktail. I did keep it to a minimum, making the ginger syrup with only about half the sugar called for. I knew it wouldn’t get as syrupy as it was supposed to, but hoped it wouldn’t make a difference in the final outcome of the drink itself. 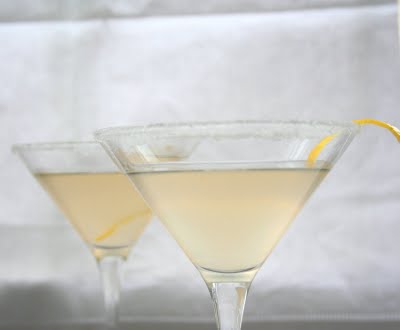 The Results I’m no Carrie Bradshaw, but I loved this cocktail and it really helped whisk me away from my mundane family life. Or rather, it relaxed me and helped me go with the flow of my mundane family life with much more equanimity. It was fairly tart, so if you are not a diabetic or a low carber, you may want to make the ginger syrup full strength, and/or rim the glass in sugar (I only did that for the pictures!). But I like tart things, and I loved the way the ginger and lemon combined with the gin. I am sure it would be fine with vodka too.

I would definitely make this again, for those times when a girl just needs a cocktail. Fortunately for me, it makes a good bit of ginger syrup, which I just popped in a jar and put in the fridge. It should last there for a few weeks. With three small kids, I am sure I will be needing a cocktail some day soon. 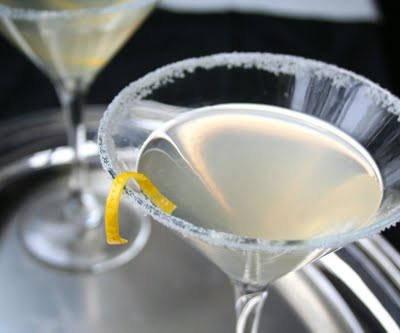 Add ingredients to a shaker filled with ice. Shake and strain into two chilled martini glasses (rimmed with sugar if you’d like). Garnish with a twist.

Slice ginger into thin coins, then slice coins into strips.

Add ingredients to small saucepan and bring to a boil. Stir until sugar dissolves. Continue to boil gently for 20 minutes, until thickened. Strain through a sieve and let cool.