Keto Cinnamon Roll Pancakes are a fun and delicious addition to your healthy breakfast routine. Make them ahead for weekday mornings or whip them up for a special brunch. Only 4g net carbs per serving!

Why not have both? These keto cinnamon roll pancakes offer the perfect solution to your morning dilemma. I took my easy keto pancake recipe and added a mouthwatering swirl of sweet cinnamon butter. Then I drizzled it all with a cream cheese glaze.

And boy, am I glad I did. So were my kids, who devoured the lion’s share in record time. These just shot to the top of our favorite keto breakfast recipes.

I created a similar recipe many years ago, but it really wasn’t as good as I hoped. The flavour was great but I struggled with the cinnamon swirl.

I used melted butter, as most cinnamon roll pancake recipes do. And, being made mostly with erythritol, it firmed up as it cooled. I had to keep warming it up so that I could pipe it properly, and even then it kept clumping up.

This time, I took a different approach. I used softened butter, and I worked the sweeteners and cinnamon in until it was like a paste. It was the perfect consistency to create a gorgeous spiral over each pancake.

This recipes takes standard keto ingredients that most of you already have in your pantry. You will need:

I used my easy almond flour pancakes as the base in this recipe. Please see the Frequently Asked Questions for alternatives.

How can I make these pancakes nut-free?

Easy! Use my coconut flour pancakes recipe. That recipe makes only 6 servings so you may only need about half of the cinnamon swirl and cream cheese glaze.

Can I use a different sweetener?

You may be able to use a different sweetener but I did try allulose in the cinnamon swirl and it was a disaster. It started to burn and smoke the moment the pancakes were flipped over. I recommend using erythritol based sweeteners or BochaSweet, but avoiding allulose for this recipe.

The cinnamon filling melts out when I flip the pancakes. What am I doing wrong?

Nothing! Trust me, those swirled spirals in the pancakes are exactly what you want and they leave plenty flavor behind. Even conventional cinnamon roll pancakes look like this.

How do you store keto cinnamon roll pancakes?

Store any unused pancakes in a covered container in the fridge for up to a week. You can also store the cream cheese drizzle in the fridge and re-warm as needed.

The pancakes freeze well too. Wrap them up tightly to avoid freezer burn. 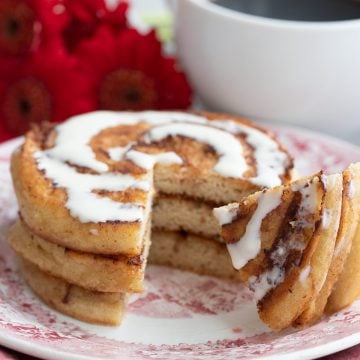