These little keto gingerbread cheesecakes make a fabulous low carb holiday dessert. Easy to make and with built in portion control! This post is sponsored by De’Longhi.

Your eyes do not deceive you, my friends. Delicious keto gingerbread cheesecake in miniature – perfect for your holiday dessert table. These adorable little cakes are full of rich gingerbread flavor, and they are quick and easy to make. Made even easier with the new De’Longhi Livenza Digital Compact Convection Oven.

The gingerbread cheesecake recipe is based very much on my Keto Cinnamon Roll Cheesecakes, with a different flavor profile and slightly more delicious cheesecake filling. But I also used this recipe to test out and review this new countertop convection oven by De’Longhi, and I am so glad I did.

I have a very large 36-inch oven in my kitchen, and I hate heating up the whole thing when I need to bake something on the smaller side, or re-heat some leftovers. It wastes energy and time, since it takes at least 10 minutes to pre-heat.

That’s where a small countertop convection oven can come in handy. But not all appliances like this are created equal. I’ve had my share fair of them over the years and I have to say, this one really lives up to the actual promise.

What I love about the De’Longhi convection oven:

I tested out the oven in a number of ways, to see how all of the functions worked. Besides these little cheesecakes, I also used it to re-heat some chicken wings and to make a few pizzas for dinner.

My pizzas were made with keto friendly cauliflower crusts, which are quite thin, so I did find that they cooked more quickly than expected. But that’s not a bad thing at all, since I was able to get dinner on the table even faster.

The bake and convection bake functions are ideal for baked goods. My mini cheesecakes cooked nice and evenly. Some countertop ovens tend to over-brown delicate cakes like this, but they came out perfectly in De’Longhi Livenza oven.

And because of the large inner capacity, you could easily bake an 8 or 9 inch round cake in it as well. This truly is a great compact convection oven and I know am going to put it to good use over the holidays.

If you are interested in the De’Longhi Livenza Compact Convection Oven, it usually retails for $199, and but is available at Amazon for just $179.95.

You can see here that I used silicone molds set into a muffin pan. You can use parchment paper liners, as long as you are using a muffin pan, since parchment doesn’t have enough structure to stand on its own.

But you can completely dispense with the muffin pan if you’re using silicone. They should be sturdy enough to stand up by themselves. And if you are using the De’Longhi convection oven, you can simply set the silicone liners right on the bake pan that comes with it.

You will notice that I use a bit of cocoa powder in the filling, and that is simply to get a deeper, more gingerbread-like color without using something higher carb like molasses. This small amount of cocoa will not make your cheesecakes taste at all like chocolate.

How much ginger you put in is up to your tastebuds. We like it with a lot of gingery kick. I recommend tasting the batter before you add the egg, to see what you think. The freshness of your ginger also matters, as older spices tend to lose potency.

If I had the time, I might have made a few mini keto gingerbread cookies to garnish the tops of the cakes. Alas, I did not, so I used star anise and a few mini keto snickerdoodles instead. But even just a sprinkle of cinnamon would be lovely.

Ready to make these fun little keto gingerbread cheesecakes? And be sure to check out the De’Longhi Livenza convection oven while you’re at it. It would make a great holiday gift for the avid foodie in your life! 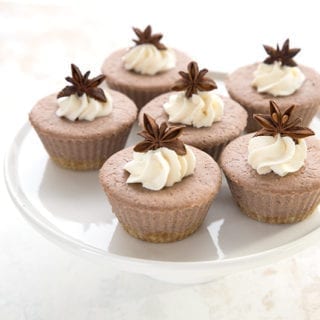