Hard to believe that this decadent Mississippi mud pie is keto-friendly and nut-free. It’s an astonishing feat of sugar-free engineering and you have to give it a try!

Have you ever heard of Mississippi Mud Pie? It’s one of those crazy mash-up desserts that’s part pie, part brownie, part pudding, and all sorts of delicious.

It’s also a huge sugar bomb so I can’t recommend eating the conventional version. I looked up a recipe from a blogger friend and it clocks in at a whopping 77g of carbs.

But my Keto Mississippi Mud Pie has the classic chocolate crust with a delicious keto brownie filling, topped by keto chocolate pudding, and a luscious layer of whipped cream.

And it comes in at only 6g of carbs per serving. How’s that for a keto makeover???

Mississippi mud pie has a number of layers so it does take some time to put together. In that sense, it’s similar to my Keto Sex in a Pan. But instead of a layer of keto cheesecake, it’s filled with gooey brownies.

Not all mud pie recipes are the same. I’ve seen variations that include a standard pie crust or a graham crust, instead of chocolate. And I’ve seen mud pies that use coffee ice cream for one of the layers.

For this keto version, I took my cues from a vintage recipe from Spaceships and Laserbeams. But besides ditching the sugar, I made both the crust and the brownie layer with sunflower seed flour, for a nut-free keto dessert.

If you take a look at the ingredient list in the recipe, it seems quite long. However, you actually use a number of the same ingredients in each layer. You will need:

I don’t need to be nut-free, can I make this with almond flour?

Absolutely. You can sub the almond flour 1:1 for the sunflower seed flour.

Can I use a different sweetener?

You can but in my experience, creamy fillings made with allulose can take a long time to set properly. Expect that the pudding layer won’t be fully set for at least 24 hours.

Do I have to make this in a springform pan?

Springform pans are useful for a dessert like this because you can easily slip off the sides without disturbing the layers. However, you can also make this in a pie plate. I recommend greasing the plate and pressing the crust all the way up the sides to help hold it together.

Is there a way to make this dairy-free?

Can I skip the bottom crust altogether?

Yes, that should be fine but I highly recommend baking it in a springform pan if you do.

Store the keto Mississippi mud pie in the fridge at all times, tightly wrapped up. It will last for up to 5 days.

I have not tried freezing this recipe although I think it may work. Let me know if you try! 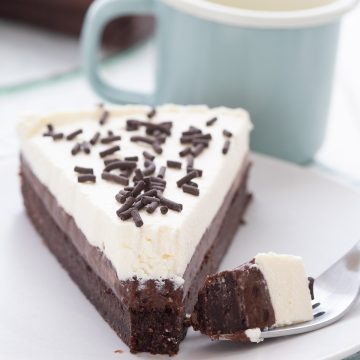