Dense rich banana chocolate chip bars with a delicious peanut butter glaze. These are the best low carb, grain-free snack ever, according to my kids! This post is sponsored by Bob’s Red Mill. 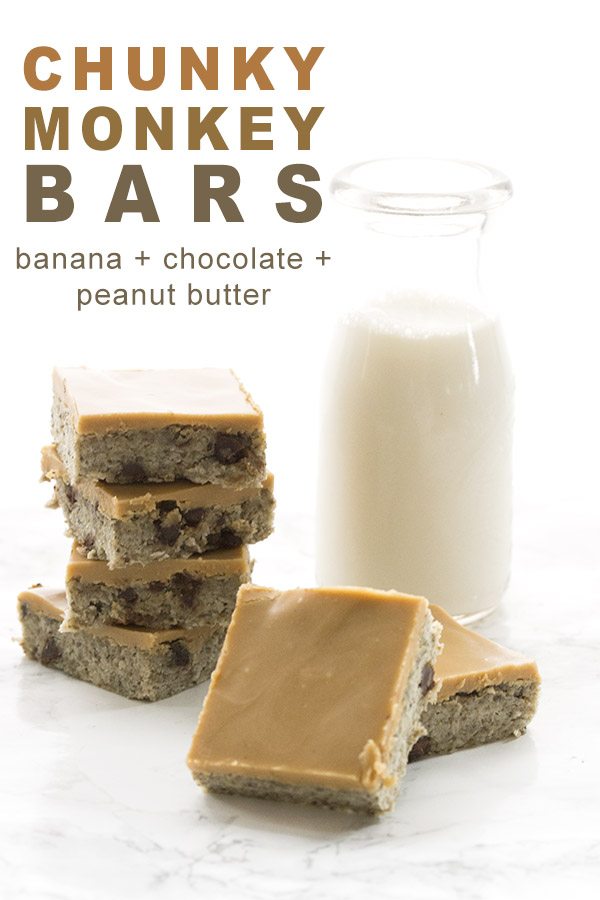 Okay, big news. Big exciting news! Well, I think so anyway, and since I think so, you’re going to have to sit and listen to me natter on about it. Because that’s what I do. That’s why I write a blog, after all, so I can natter on about the various things that interest me. Some of you pay attention, some of you don’t. It doesn’t really matter, in the end. I suppose I am narcissistic enough just to want to natter on, no matter who is listening. Apparently I like the sound of my own voice…or at least how it sounds in my head as I write. 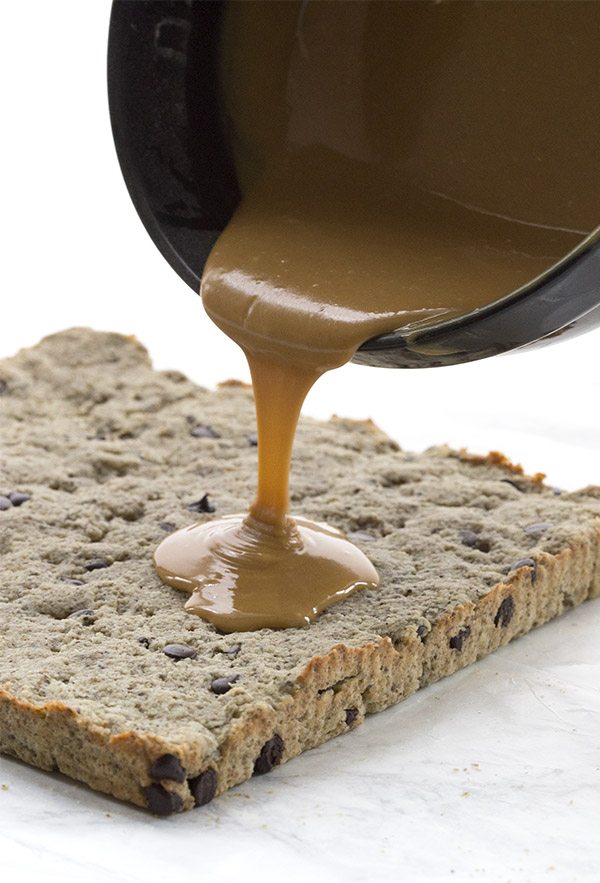 And the big news is…Bob’s Red Mill Almond Flour! Wait, wait, I know you think this isn’t news, but it is. Because now, instead of being “Finely Ground Almond Meal/Flour”, it’s actually “Super-Fine Almond Flour”. And it is truly super-fine now. As something of an almond flour connoisseur, I’ve used many brands of almond flour and almond meal in my day. And Bob’s new flour stands up to the rigorous Carolyn Baking Test. The first thing I did was make some double chocolate muffins and they rose delightfully with great texture and a lovely smooth dome on top. I swear you wouldn’t know them from conventional wheat-flour muffins if I didn’t tell you. This almond flour is easily as good as, or possibly better, than Honeyville or WellBee. And since it happens to be coming from one of my favourite brands ever, I am absolutely delighted by the change. 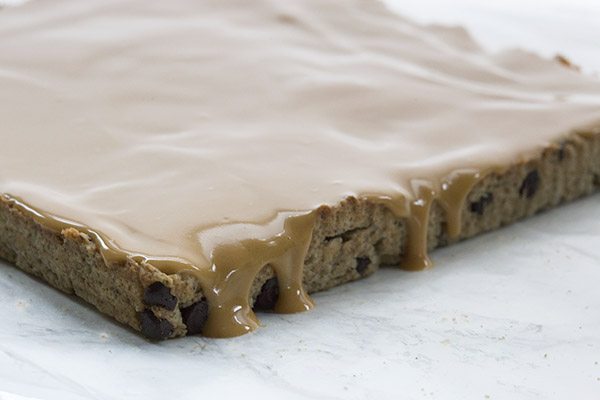 It’s been rolling out for a bit but you may not see it yet at your local stores, as they may be working through older stock. Bob’s isn’t keeping both grinds of almond flour, so in a little while the Super-Fine will be all you can purchase (it’s already the only one available on their website, as far as I can tell). And the bags look virtually identical so it’s only the name that really differentiates the two. Well, that and the fact that you can literally see the difference in the fineness through the bag. So keep your eye out for the Super Fine, it will be heading your way soon! 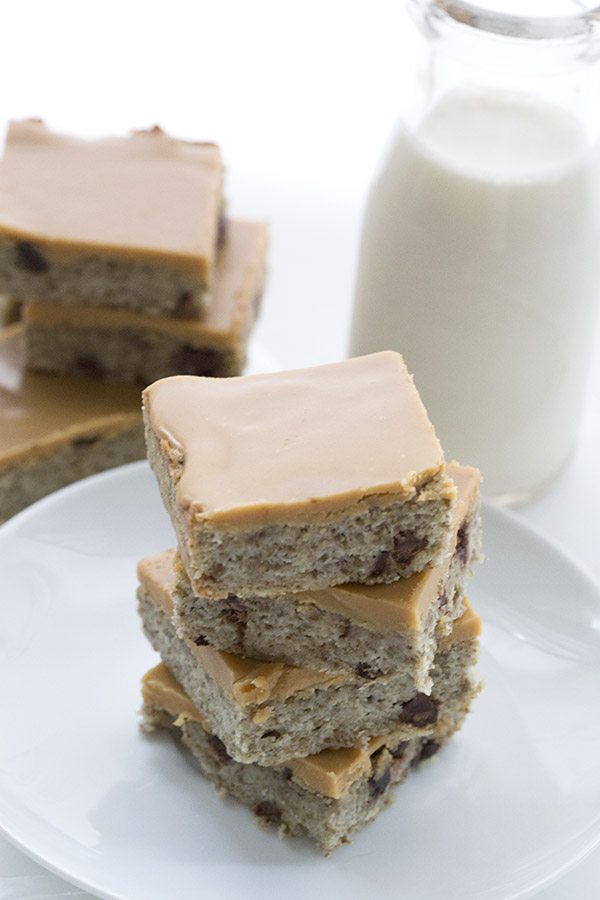 These low carb banana chocolate chip bars were my next recipe with the finer almond flour. I wanted a really dense blondie-like bar and I knew that the finer almond flour would help me achieve that more easily. And as I did with my low carb Banana Bread recipe, I also used Bob’s chia seed to get that moist banana-like texture. And you know, it never hurts to smother it with a peanut butter glaze. Which basically turned these into Chunky Monkey Bars. A far more succinct name than low carb banana chocolate chip bars with peanut butter glaze. But whatever you call them, they are seriously good. Best low carb after school snack EVER, according to my kids. 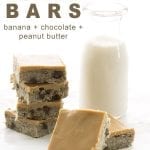 Disclosure: Thanks to Bob’s Red Mill for partnering with me to bring you healthy, low carb recipes. I was compensated for this post but all opinions are my own.

USED TO MAKE THIS RECIPE: 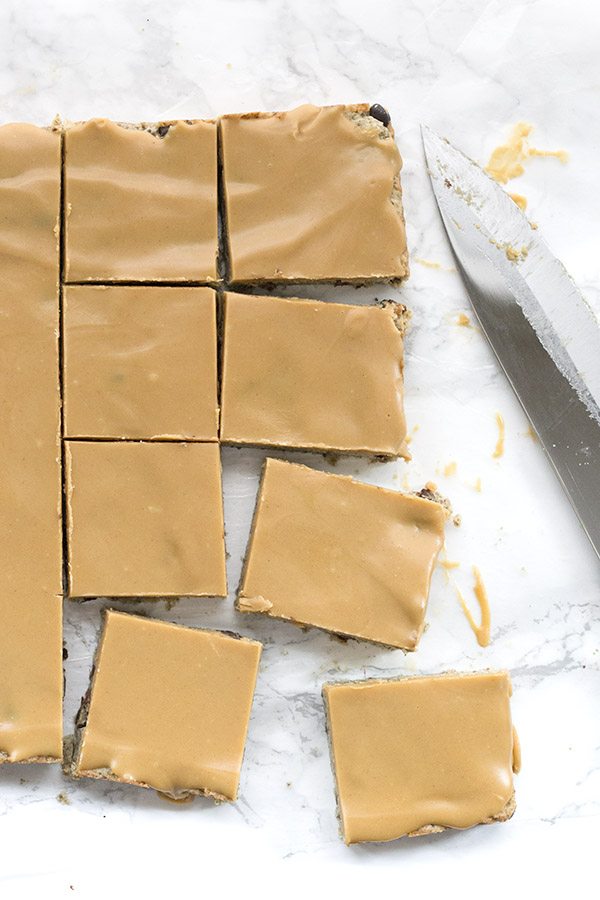