All the wonderful flavors of Thai Peanut Sauce on tender, juicy grilled chicken. This easy and delicious low carb recipe is perfect for your next cookout!

I think if I were forced to pick a single ethnic cuisine to eat for the rest of my life, I would pick Thai food. I just find something magical about the interplay of flavours in Thai, of heat and salt and sweet and tangy.

The undertones of things like lemongrass and ginger and garlic just fire up my tastebuds and I salivate just thinking about it. And the liberal use of coconut and coconut oil appeals to me too. I’ve created quite a number of Thai-inspired recipes for All Day I Dream About Food.

I don’t dare say it’s authentic Thai, but it emulates the flavours and textures as best it can in my low carb fashion. Add this one to the list!

I think I first had peanut sauce on a dish made by my sister-in-law. She’d found a good recipe that they used frequently in a couple of ways, one of them being as a sauce for chicken thighs. Not a marinade, mind you, but a sauce to pour over after the chicken was done.

I carried a hand-written version of that recipe home with me and we made that sauce frequently for a long time. Over the years, it changed and adapted to my own tastes, with a bit more heat and the addition of some tangy, salty fish sauce. And I started leaving out the sugar even before I went low carb, as it just didn’t seem to need it.

I don’t quite know what inspired me to use it this time as a marinade. It just struck me as the right thing to do. At first I envisioned leaving some sauce for pouring on after, but in the end, I used it all up as the marinade and for brushing on the chicken while it grilled so that it got sticky and slightly charred. 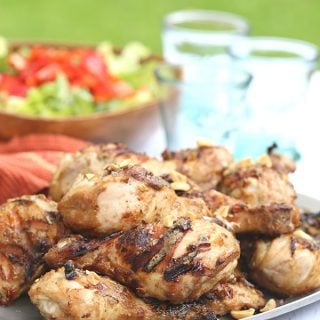 I’ve been in love with peanut sauce ever since my first taste. It usually contains added sugar, but I’ve found the flavor to be just as good without it. Instead of using it as a sauce to pour over the chicken, I use it as a marinade. It was just as delicious as I’d hoped.
5 from 1 vote
Print Pin Rate
Course: Main Course
Cuisine: Asian
Keyword: thai peanut chicken
Prep Time: 10 minutes
Chill Time: 1 hour
Total Time: 1 hour 10 minutes
Servings: 8
Calories: 375kcal