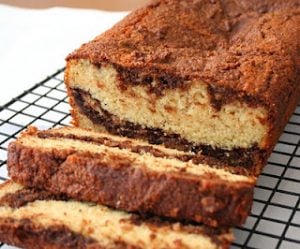 I’m a big proponent of the idea that if you have a good thing going, you have to use it to your advantage. You have to grab the bull by the horns, and really go after it, and take that good thing to new heights. Don’t let it languish, but do all in your power to make it bigger and better. I sound like I am talking about lofty ideals and ambitions here, don’t I? But really I am just talking about cake. Yes, cake. My Almond-Crusted Butter Cake was so good, and turned out so well, I immediately started thinking how I could use it in other ways. Some people may say it’s too early to reprise the recipe, that I should wait at least a few months. But I happily thumb my nose at such people. Good cake is good cake and deserves as much time in the spotlight as possible. And if I add Nutella to said cake, surely that changes it enough for a second go-round!

I have a lot of recipes on this blog that I love, but I don’t always have the time to make them again. But really, I loved this cake so much, I knew I need to make it again, and soon. Still, being of a rather restless nature and prone to boredom, I knew I also needed to give it a little twist. I’ve seen a number of Nutella swirl cakes and loaves and let’s face it, that delicious combination of hazelnut and chocolate is never really far from my mind. So the idea of swirling some into the batter of my new favourite cake as not difficult to come by. I left off the almonds on the outside, and I used vanilla extract instead of almond for the cake batter. I also sweetened it a bit more than the almond cake, because I thought it would complement the nutella flavouring. 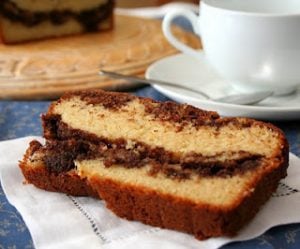 The Results: Okay, so the loaf sank in the middle a bit after cooling, a constant issue with gluten free baked goods. But the reality of it is that you won’t care a flying fig about the sunken middle when you taste this. Seriously, it is that good. It’s definitely on the sweeter side than the almond cake was, and I truly like them both for what they are. This one was a huge hit with the all of kids and my son said it was even better than the loaf cakes at Starbucks. This is high praise from him, believe me.

You may notice that it’s more of a line of nutella, rather than a swirl. I will confess that the thick batter of the cake does make it difficult to swirl in. And so the resulting layer of nutella may be part of the culprit for the sinking middle. Next time, instead of just swirling in nutella straight, I may hold back a bit of the batter to mix in first. Regardless, you can make this cake as is and you won’t be disappointed. 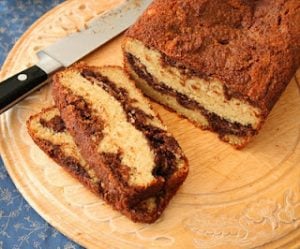 For the cake, preheat oven to 320F and butter a loaf pan very well. Sprinkle sides and bottom of pan with sliced almonds, pressing into butter to adhere to sides.

In a large bowl, beat butter until smooth. Add granulated erythritol and beat until lighter and well-combined, about 2 minutes. Beat in eggs, one at time, scraping down beaters and sides of bowl with a rubber spatula as needed. Beat in vanilla and stevia extracts. Beat in half of the almond flour mixture, then beat in almond milk. Beat in remaining almond flour mixture until well combined.

Bake 45 to 5o minutes, or until top is deep golden brown and a tester inserted in the center comes out clean. Let cool in pan 5 minutes, then flip out onto a wire rack to cool completely.