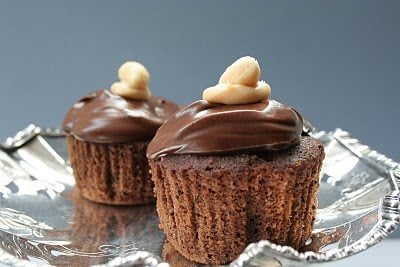 These aren’t even remotely low carb, so don’t even THINK about eating these if you can’t tolerate loads of sugar and flour!!! I still enjoy baking for other people and that’s what this recipe is about. A serious indulgence for a special occasion. A dense chocolate cupcake filled with luscious peanut butter creme, all topped off with a rich chocolate peanut butter ganache. I think I can feel my blood sugars rising just writing this!
What occasion could be special enough to warrant such decadence? If I told you it was the Fourth of July, you might think think I was an exceptionally patriotic person, especially given that I am not actually a citizen of this fair country. So I will own up to it and say that in reality, Independence Day was just a cover for the fact that I’ve been wanting to make these for about six months now. In a roundabout way, they were a very belated treat for my sister-in-law’s fortieth birthday. Well, now I am making myself sound like a horrible person, being that her birthday was back in December. But that was when the idea for these intense cupcakes was actually conceived. The execution just took a little longer than that!

My sister-in-law is just about the loveliest person you could ever hope to know and really, she deserves her birthday treat on her actual birthday. I wanted to make these for the intimate gathering of friends and family that she and her husband were planning, I really did. The inspiration came to me when we were all together for Thanksgiving and her husband mentioned how much she liked anything of the chocolate peanut butter persuasion. Like me, she gets a little obsessed with certain flavour combinations, and when it comes to those little legumes combined with chocolate, who can blame her? But she also lives a good five-hour drive away, and upon reflection, I realized I wasn’t sure I could get the cupcakes to her in one piece. I hadn’t tried making the PB creme filling before, and I was afraid that perhaps it would leak out of the cupcakes on the journey. I had visions of everyone relying on MY creation as the dessert of the evening, and I didn’t want it to be a disaster. Instead, I told her of my cupcake vision and made a promise of a future treat when they came to visit us.

So I confess that a family get-together over the Fourth of July was really just a convenient excuse for me to attempt the cupcakes I had created in my head. The truth of the matter is that they could have come on Bastille Day and I would have used that as a reason to make the cupcakes. Come to think of it, I am the sort of person who would use a trip the dentist as an excuse to bake something delicious. Good food, especially dessert, needs no excuse! 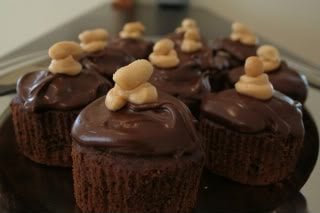 The Results: I did actually have half of a cupcake, so I can say firsthand that these were pretty darn good. The peanut butter creme filling worked out well and didn’t leach out of the cakes at all. The chocolate peanut butter ganache was rich and intense, just as I had intended it to be. The cupcakes themselves weren’t perfect, I think I might have underbaked them a bit, so they ended up a bit more dense than I anticipated. I’ve made this particular chocolate cupcake recipe (out of “The America’s Test Kitchen Family Cookbook”) many times and had good results so I think the error must have been mine. I will provide my recipe here, but you could sub in your own favourite chocolate cupcake recipe if you wish.

For the cakes: Preheat oven to 350F, and line 12 muffin tins with paper liners. Combine flour, cocoa, instant coffee, baking soda and salt in a medium bowl and mix well. Set aside.

In a large bowl, beat butter and sugar together with an electric mixer on medium until light and fluffy. Add eggs, one at a time, scraping down sides of bowl and beaters as needed. Add vanilla.

Divide batter among prepared muffin tins. Bake 18-22 minutes, or until a tester inserted in the center comes out with a few crumbs attached. Let cool in the pan for 10 minutes and then transfer to a wire rack to cool completely.

For the filling: Whip cream in a small bowl until it forms stiff peaks.

Combine cream cheese and sugar in a medium bowl and beat with an electric mixer until smooth. Add peanut butter and beat until combine. Fold in whipped cream until the mixture is smooth. 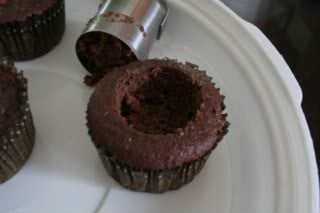 Core cupcakes using a 1-inch biscuit or cookie cutter as in the picture above (if you lack both of these, you can do it with a sharp knife). Set cores aside. Place peanut butter filling into a pastry bag or a ziploc bag with the corner snipped off, and pipe filling into cored cupcakes. You may end up with a little filling left over – set aside to use for decorating the glazed cupcakes. 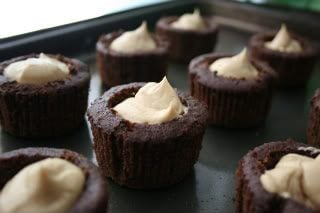 With a sharp knife, cut the very tops off the cores so that you have a thin disc of cake. Place a disc on top of the peanut butter filling on each cupcake and press lightly to adhere. 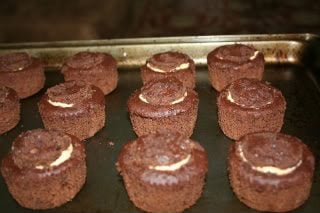 For the ganache: Melt all ingredients in a small saucepan over low heat, stirring until smooth. With a small spoon, spread ganache thickly on the top of each cupcake, making sure to cover the top well to hide any seams from coring and filling. Place cupcakes in a cool, dry place to set the ganache.

Use any leftover peanut butter creme to decorate the tops however you wish. I dolloped a bit on the cupcakes with my pastry bag and then placed a peanut on each.