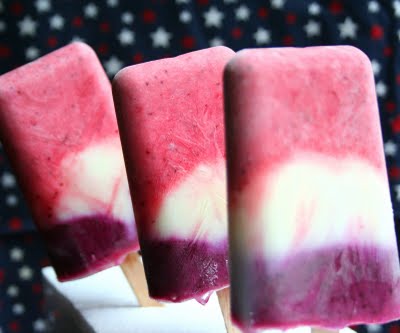 Okay, so they are more pink, white and purple than red, white and blue. But when it comes to patriotism, surely it’s the thought that counts. I am fairly certain that the forefathers of this country didn’t expect us to be rendering our allegiances in berries and yogurt, or cake, or any food for that matter. But it certainly is fun and festive. And I happen to live in a town that takes its Independence Day celebrations VERY seriously. We lay claim to having the largest Fourth of July parade in all of Massachusetts. And the citizens take it to heart, and start saving their spots along the parade route with folding chairs more than 24 hours in advance. We’ve actually missed the revelry both years that we’ve lived here, due to other plans, but perhaps this year will be the one where we stand in the hot sun, watching the parade go by. 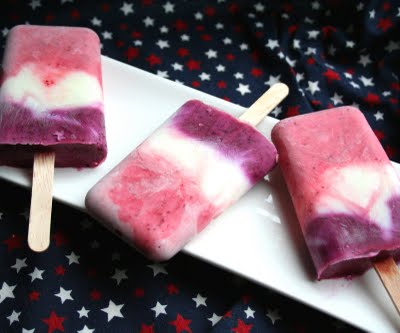 I, of course, am not really a citizen of this country. By virtue of my marriage, I am a greencard holder, a permanent resident, a “legal alien”, if you will. What does that mean for my allegiances? That, my friends, is an interesting question. I have lived in the US now for 13 years, and I daresay that I will end up living here longer than I ever lived in Canada. My kids are Americans (Canadians too, technically), and we have roots here. But I think I will always identify myself as Canadian, first and foremost. It’s very much a part of who I am and how I think of myself. I feel my heart swell with pride when my homeland is mentioned (or, on occasion, shrink with shame, as with the recent riots in Vancouver). And although I have switched to pronouncing the last letter of the alphabet as “zee”, this is mostly to avoid the confusion on people’s faces when I say “zed”. I stubbornly refuse to drop the “u” in words like favourite and honour and harbour, a fact which drives the spellcheck on my computer crazy. I secretly get a little kick out of this. 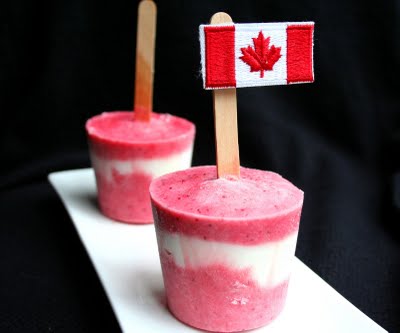 That’s not to say that I feel no allegiance to my adopted country. It’s been good to me, there is no question about that. It gave me my Master’s degree, and my first (and second, and third) real job after graduate school. It introduced me to the man I would marry and it’s where all three of my babies were born. It’s home…at least for right now. And the funny part is, I now know the words to the Star Spangled Banner as well as, or perhaps better than, I know the words to O Canada. So yes, I suppose I do feel a certain amount of loyalty and allegiance to the US. But it is tinged with the sense of not quite belonging, of having allegiances elsewhere as well. Perhaps it always will be. 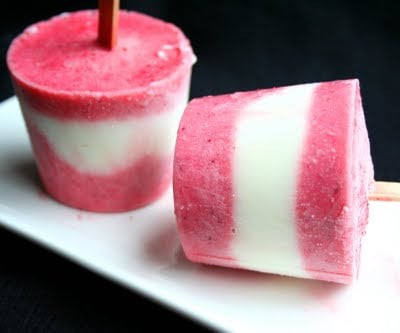 So these yogurt pops are my offering to the Independence Day celebrations, but in the spirit of divided allegiance, you will notice that I also did some Red, White And Red (or pink, white and pink) popsicles for those north of the border. After all, Canada Day, July 1st, comes first! I got the idea for these when I saw some truly junky red, white and blue popsicles at the supermarket around Memorial Day, all sugar and artificial colouring. Mine are full of goodness, fresh berries and delicious greek yogurt. You can sweeten them with whatever you like. I chose stevia to remain low carb, but sugar or honey would work just as well. My kids loved them, and I have pictures of yogurt-pop-covered-faces to prove it! 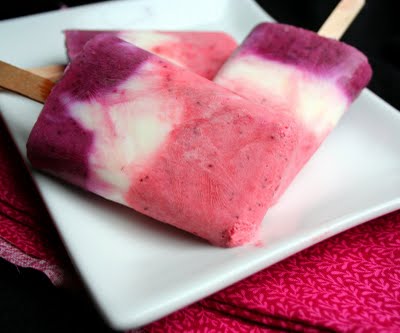 In a blender or food processor, combine strawberries, half a cup of the yogurt, 1 tablespoon lemon juice and sweetener. Blend until smooth. Remove to a bowl or measuring cup.

Repeat with the blueberries, half a cup of the yogurt, 1 tablespoon lemon juice ans sweetener.

Place molds in freezer and chill 1 hour, until just starting to firm up. Add popsicle sticks and freeze until completely firm, at least another 2 to 3 hours.

Notes: if you want to do Red, White and Red, omit the blueberries and increase strawberries to 1 cup. Blend strawberries with 1 cup of the yogurt and 2 tablespoon of lemon juice, plus preferred sweetener. Layer strawberry mixture on the bottom and the top of the popsicle molds.

Makes about 8 regular-sized popsicles, but how many will depend on the size of your molds or paper cups.