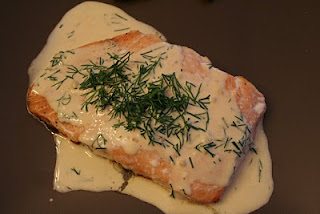 We had an intense thunderstorm here the other night. It came with almost no warning – a few thunderclaps and it was upon us with torrential rain and a ferocious wind. Besides knocking out the power for a few hours, the tempest managed to hurl our patio umbrella right off the patio, taking with it my new planter full of various herb seedlings. I could just barely see through the sheets of rain on the window that the whole planter had been turned right upside down. Poor little herbs! I was itching to go out there and see what had become of them, but I knew I needed to wait until the storm had abated. As soon as it was no longer dangerous, my husband and I went out in the rain to flip the planter upright. The little plants survived the insult astonishingly well – a few stems of dill were snapped, but that was about it.

I had salmon thawing in the fridge for dinner and the intention was to serve it with toasted sesame seeds and wasabi mayonnaise. But I had no power, and I discovered that I also had no wasabi. The salmon would have to wait until the next evening, and either I was going to have to hit the grocery store for wasabi powder, or I was going to have to come up with a new recipe. And that’s when the snapped dill fronds caught my eye. Of course! What better way to use up the few casualties of the storm!

Salmon is one of those foods that is amazingly simple to prepare. But it’s also one of those foods that is amazingly simple to ruin. A little too long in the oven or the pan and it’s as dry and tasteless as old boots. I’ve followed a number of recipes in the past that always sounded so much better than they tasted. Well, no longer. I now have a solid, I might even venture to say foolproof, method for cooking salmon, courtesy of Mark Bittman’s “How To Cook Everything”. The title of his cookbook has always struck me as spectacularly ambitious, but he really does do a good job of touching on the basics of most foods. So it’s surprising that it took me so long to try his method of oven-roasting salmon. Perhaps I was hunting for more adventurous recipes and overlooking the simplicity of popping the filets into a pan full of melted butter.

I finally tried it with a fresh salmon filet a few months ago, and jazzed it up with some sesame oil, toasted sesame seeds and wasabi mayonnaise. It was one of the best salmon dishes I had ever had, and certainly the best I have ever made myself. The plan was to try it again with some frozen salmon from Trader Joe’s and see if it was as good. The aforementioned storm and lack of wasabi thwarted my plan, but with a little creativity, some broken dill fronds, and a few ideas gleaned from Epicurious.com, a new recipe was born.

The Results: Fresh salmon would probably have produced an even more tender dish, but this was still wonderful. As with almost everything I make, this recipe is an almagamation of several others. The resulting cream sauce was just as I had pictured in my head, lightly complementing the flavour of the fish without overpowering it. The dill flavour was fresh and clean, and the extra sauce tasted wonderful on the quinoa I served as a side. I don’t often have fresh dill on hand, so this was really an opportunistic creation, but it worked. I would happily make it again, and as long as my dill thrives this summer, I plan to.