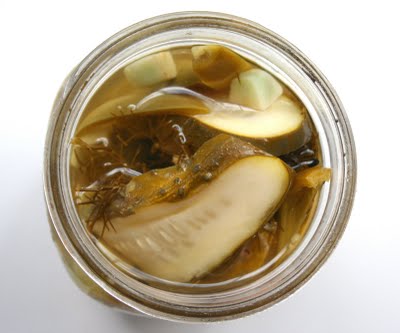 Ever noticed how time seems to go by faster and faster the older you get? Why is that? Is it because the older we get, the more responsibilities we take on and the less time we have for just being? Time seemed so slow when I was a child, and summer seemed lazy and long. But not anymore. June just whizzed by and now summer seems like it’s almost over. Back-to-school items are popping up in stores already, and July is half gone. I can hardly keep up! So it took me by surprise to find that it’s already time for another round of the Secret Recipe Club. That one snuck up on me.

Fortunately, I long ago made my secret recipe. I was assigned another blog that was heretofore unknown to me, which is just as I like it. This one is called Flamingo Musings, and according to her tagline, she does everything! She cooks, bakes, cans, gardens, reviews and promotes causes, so you can see how you might get very lost in her blog for days on end. I easily could have, but was fortunate to land on the very recipe I wanted to make the first time I visited her blog. It was fate, it was destiny, it was kismet. 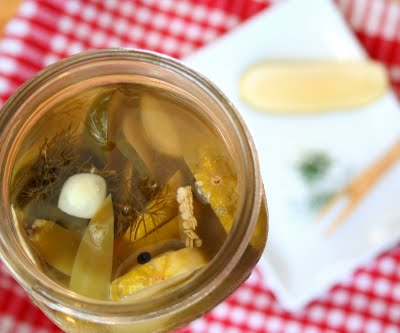 See, I had an overabundance of dill in my garden that was starting to go to seed. I bought some pickling cucumbers, thinking that might be a way to use some up. But I just wasn’t getting around to it, I kept leaving them in the fridge, checking every so often that they weren’t rotting away in there. When I checked out Flamingo Musings blog, the very first post I saw was for Spicy Garlic Cucumber Pickles. It was exactly the kick in the pants I needed, and I got to it that every afternoon. I did, however, make some changes. Her pickles look wonderful and I’d love to try them her way exactly sometime. However, I didn’t want to go through the whole process of canning, just for one or two jars of pickles. And I’d had such good luck with my Green Tomato Pickles back in October, I thought I’d go easy on myself and just do a refrigerator version of her Spicy Pickles.

I made a few other changes as well, to accommodate the items I had on hand. I had more pickling cucumbers than she did, for one thing, so I made 1 ½ quarts (or 3 pints, however you want to say it). I had no pickling salt, so I went with kosher and added quite a bit more of it. I had a jalapeno on hand, so I subbed that in for the serrano chili. I had ground coriander, so that went in for the coriander seeds. And finally, I had all this dill, but no dill seeds…so I plopped the dill fronds in place of the seed. And finally, I decided to slice my cucumbers into ¼ inch lengthwise slices, so that they’d make good sandwich pickles, the perfect shape to top burgers and other sandwiches. It also made it easier to really get them packed into the jar. 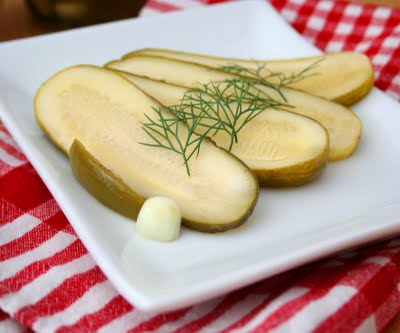 The Results: As long as pickling cukes are readily available, I am not sure I would ever buy storebought pickles again. These were a huge hit with the whole family, and they were SO easy to make, no canner required. They were crisp, and had a great kick to them that got more intense the longer they stayed in the brine. The best part is, you can easily customize this recipe to your liking, kicking up the heat or toning it down, adding more garlic or more dill, whatever. They were so good, and I’ve already bought my second round of pickling cucumbers from the farmer’s market, ready to go. My kids were so excited to see them sitting on the counter, because they knew it meant more homemade pickles!

I did find I had a little too much brine for the jars I had. I also found that the pickles got better with age…the first one I tried wasn’t quite as flavourful as the ones a few days later. 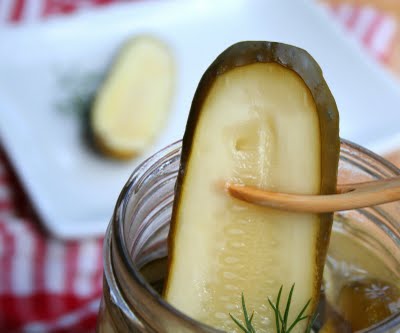 In a medium saucepan, bring vinegars, water and salt to a boil, stirring to dissolve most of the salt. Divide brine among jars, almost to the top (no worry about leaving headspace here, these are refrigerator pickes. Fill ‘er up!). Screw on jar lids.

Leave jars on kitchen counter for at least 3 days. After that, refrigerate. They can be eaten after the three day mark but the flavour will continue to develop so you can certainly leave them longer in the fridge before eating.

They will last several months in the fridge. My Green Tomato Pickles were good from last October up until I finished them this past May!