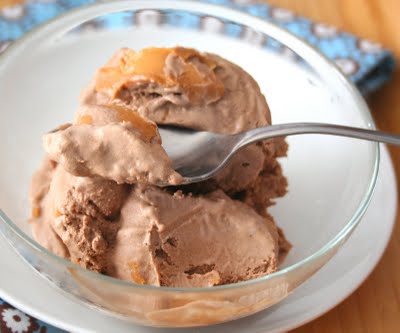 I’ve had an ice cream maker for a long time. Let’s see now. I believe I received it for Christmas during my second year of graduate school, so that would be 1998. Which means that it has been in my possession for almost 13 years. But I have only made really good use of the darn thing in the last 3 years. See, back in the day I was an avid reader of Bon Appetit magazine and was always coming across delicious-sounding ice cream recipes. I also attended grad school in Arizona, so I had romantic notions of whipping up delicious flavours of ice cream and serving them to my classmates to cool off whilst we discussed evolutionary theory and memorized all of the species in the Order Primates.

Yeah, that didn’t happen. What really happened was that I tried it out a few times and ended up with ho-hum ice cream that froze rock solid and had to be chipped away with an ice pick. I thought it was the fault of the ice-cream maker, so I packed it away and didn’t get it out for years and years. It managed to travel with me from apartment to apartment, and then finally across the country to Boston, where it remained in storage. It followed me out to the suburbs and finally made it’s comeback when my children saw ice cream being made on a cooking show and asked about it. I expected similar ho-hum results and that my kids would tire of it quickly, but was taken aback by surprisingly great ice cream. Turns out that you have to have a little patience to make great ice cream at home, something I’ve never had a lot of to begin with. You need patience to chill both your custard and your freezer canister really well. I am quite certain that I skimped on both of these things back in Arizona. 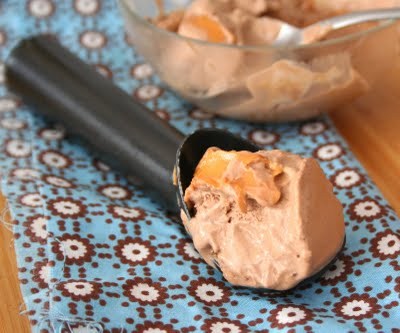 Once I finally had that little trick nailed, making this particular recipe was almost inevitable. You might go so far as to say it was pre-ordained. Because Chocolate Peanut Butter Ice Cream has always been one of my favourites. It was my usual choice on trips to Baskin Robbins as a kid, once I tired of the novelty of that revoltingly pink bubble gum flavour. I loved the deep, dark, creamy chocolate with the chunks of frozen peanut butter. Baskin Robbins did it best, no question, and I spent years trying to find a decent equivalent in the absence of a local BR. Lots of storebought brands seemed promising but failed to deliver. Either they simply contained peanut butter cups and not chunks of peanut butter, or the base ice cream was not creamy or chocolatey enough. 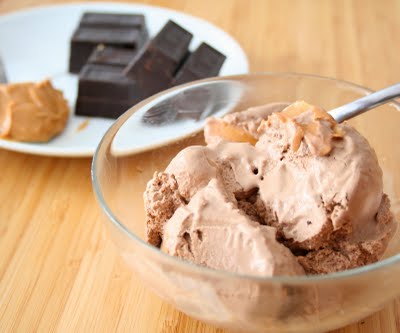 Then one day my husband brought home some Turkey Hill Chocolate Peanut Butter Cup Ice Cream. I eyed it skeptically for a few reasons. One, it called itself “Peanut Butter Cup”, therefore it must not contain real chunks of peanut butter, but instead little mini peanut butter cups. Two, the base ice cream was a pale chocolate, not the deep dark chocolate of Baskin Robbins. But then I took a spoon and dug in…and to my delight I discovered huge ribbons of frozen peanut butter in a chocolately base, and nary a peanut butter cup in sight. In fact, the ribbons of PB were so big that sometimes you got a bowl that was more peanut butter than ice cream, and those were the ones that I loved best. Turkey Hill quickly became my favourite brand of ice cream and this was my favourite flavour. 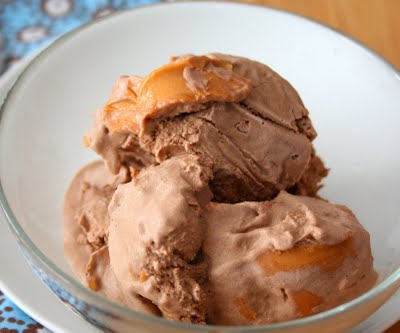 Now, of course, I can’t eat much of any commercial ice cream, so the time finally came to make my own version of this beloved treat. I took my usual low carb base ice cream recipe, a combo of heavy cream and almond milk, and added a quarter cup of cocoa to the mix. I then dabbed spoonfuls of peanut butter on a wax-paper lined plate and popped those in the freezer to harden up. When the chocolate ice cream was done churning, I took the chunks of peanut butter and tossed them in, as well as swirling a little more peanut butter into it. And then I packed it away in the freezer to firm up. 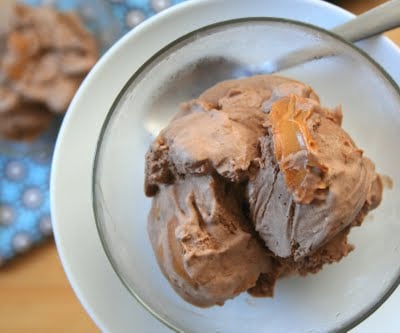 The Results: I would say that this is the best low carb ice cream I’ve made to date. The custard base was thicker and creamier than any I’ve made so far, and I think it must have something to do with the cocoa powder. The chunks of peanut butter were perfect, and I think freezing them and dropping them in after the ice cream has churned is the key. I wouldn’t even bother trying to swirl any PB in, either when it’s still churning or afterwards…that just gets lost in the shuffle. Next time I would simply do more PB chunks.

I would like to find a way to get the base even more chocolatey, like the dark chocolate of the Baskin Robbins version. This is something to shoot for and I will let you know if I am ever successful! 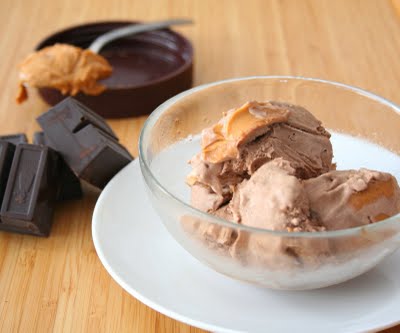 Whisk egg yolks in a small bowl until smooth. Very slowly whisk in 1 cup of the hot cream mixture to temper the yolks. Then slowly whisk tempered yolks back into cream mixture, stirring constantly. Continue to cook until very hot, 175 – 180F.

Meanwhile, dab small amounts of peanut butter on a waxed paper lined plate and freeze until custard is ready.

Stir in vodka, stevia and vanilla extract, then pour mixture into an ice cream maker and churn according to manufacturer’s directions. When mixture reaches soft-serve consistency, transfer to an air-tight container and stir in frozen peanut butter chunks. Freeze until firm but not rock hard, 2 to 3 more hours.