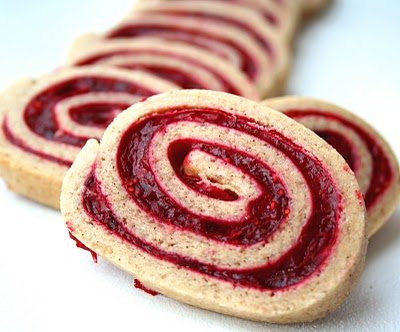 I get a lot of inspiration from my fellow food bloggers, but as a general rule, I don’t make any of their recipes wholesale. At the very least, I make a few minor changes to suit my own tastes or what I have on hand. Often, I am looking for recipes that I can modify to be low carb and/or gluten free, which usually means a major overhaul of the recipe. But every so often, I come across a recipe that I have to just make as is. This one, from Baked By Rachel, was one such recipe. I saw it and instantly knew that I wanted to add it to my Christmas cookie line-up to give away to friends and family. The pinwheels are so colourful and festive, and I thought that the cranberry-cinnamon flavour combination would be lovely. A nice addition to my Gingerbread White Chocolate Biscotti and Caramel Nut Bars. 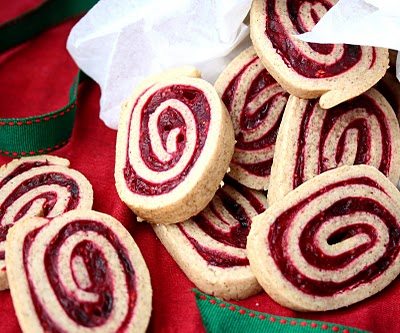 The Results: They are lovely cookies indeed, especially if you like the tartness of cranberries to come through. The dough almost seems like shortbread in texture, and the hint of cinnamon complements the cranberry very well. As Rachel noted, they don’t spread much and the dough is a bit hard to work with for rolling up into logs as it is fragile. They don’t come out as nice round cookies because of this, but they still look remarkably pretty.

In the end, I did sort of change something, by making more filling. I didn’t think I had enough when I was spreading it on the rolled out dough so I quickly made a little more. I realized when cutting it into cookies that I had spread it quite thickly, but I rather like them like this. So I will write the recipe to reflect little more filling but you could pare it down if you like. 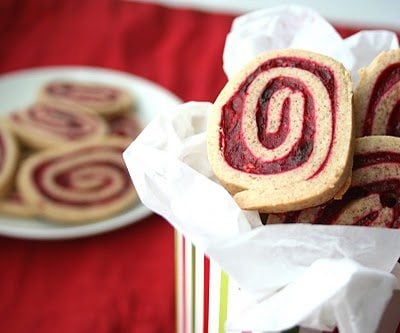 For the dough, cream butter and sugar together in a large bowl until thoroughly combined. Beat in egg and vanilla, scraping down bowl with a rubber spatula as needed. Add flour, salt and cinnamon and beat until dough comes together.

Divide dough in half and form into balls. Wrap in plastic and flatten into discs. Refrigerate for at least one hour.

Meanwhile, heat cranberries, sugar and 1/2 cup water in a medium saucepan over medium heat. Cook, stirring frequently, until cranberries pop and mixture just comes to a boil. Remove from heat.

In a small bowl, stir together 1/4 cup water and cornstarch. Stir into hot cranberry mixture until thickened. Add cinnamon and stir until combined. Let mixture cool completely, at least 1 hour.

When the dough is firm enough to work with, roll out one disk into a rough rectangle, about 12×10 inches, on a lightly floured surface. Spread with half of cranberry mixture, leaving 1/2 inch around border of dough.

Starting at one of the shorter ends of the rectangle, roll carefully up into a log. Pinch and seal ends and wrap tightly in plastic and then in aluminum foil. Repeat with second disk of dough.

Freeze for at least one day and up to two months. When ready to bake, preheat oven to 375F. Line two large baking sheets with parchment or silicone mats.

Using a large, sharp knife, slice logs into 1/3 inch slices. Bake 12-15 minutes, or until edges are just starting to brown. Cool 5-10 minutes on baking sheet and then transfer to wire racks to cool completely.