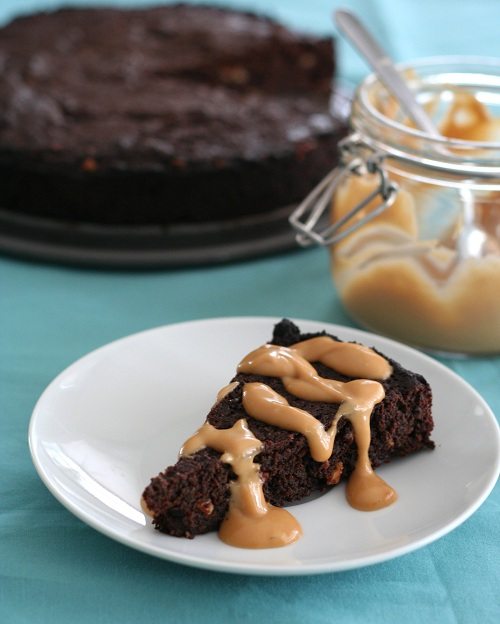 Feeling guilty is rather stereotypically considered to be the birthright of both Catholics and Jews, but I’d say it’s a non-exclusive birthright.  I grew up in a household with no particular religious leanings, although if pressed we probably would have considered ourselves Protestants in the manner of the United Church of Canada.  Truth be told, we likely only identified ourselves as such because Gordon Lightfoot sang at our local United Church every Christmas, and we all loved Gordon Lightfoot.  But even without a religious upbringing, I am still prone to massive amounts of guilt, often over the most ridiculous things.  Someone required to go out of their way on my behalf?  Guilt.  My kids spilled something on your carpet that’s going to leave a stain?  Guilt.  Not bringing my readers three new low carb, gluten-free recipes a week?  Guilt, guilt, guilt.  So here I am, posting this low carb Flourless Chocolate Torte recipe on a Sunday, all because of guilt.  It’s a remarkably powerful emotion.

I try very hard to choose my sponsored opportunities wisely and make sure that I believe in the product and that it fits in with my healthful lifestyle.  I also try to space these things out, to avoid becoming a commercial, because that is certainly not the intent of my blog.  But occasionally, events conspire against me and suddenly I have a number of sponsored posts in a row.  Last week, I posted about avocados (yummy and healthy!) and Kelapo coconut oil (yummy and healthy!) and then I did a round-up for the Super Bowl that included no new recipes.  And tomorrow, I will have another sponsored post up, one that was supposed to happen in early January but got delayed by the client, and which also contains no recipes.  It suddenly it struck me that I was not fulfilling my blogger-ly duties in the recipe department.  Ohhhh, here comes the guilt! 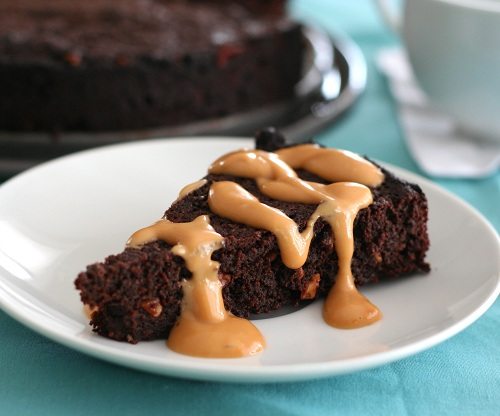 So to allay that guilty feeling, I decided to bring you something utterly delicious to distract you from my inadequacies as a food blogger.  Look, look, it’s a rich low carb chocolate dessert that’s incredibly easy to make and tastes divine!  Please forgive me, okay?  I promise never to fall down on the job again.  Except for the next time that things conspire against me.  And then I will assuage my guilt by distracting you with  massive amounts of chocolate.

This recipe is actually my gluten-free version of a recipe on the Swerve website.  I have been working with them to re-do some of the photos of their recipes, and one of the items is a simple but delicious chocolate torte.  Theirs is made with about half a cup of flour, but I was so impressed with the flavour and texture of it, I had to try my hand at recreating it with almond flour instead.  I wasn’t sure it would work, and I knew it might not hold together as well  without any gluten, but I figured it was worth a try.  And boy, was it ever!  It’s a touch more crumbly and you really have to let it cool before even attempting to slice it.  But it’s deliciously rich and chocolate-y, and there is no way to tell it’s low carb and gluten-free.  I would easily serve this to the pickiest, most skeptical guest and blow their tiny little minds!

I served mine with low carb salted caramel sauce, but a little lightly sweetened whipped cream would be wonderful too. 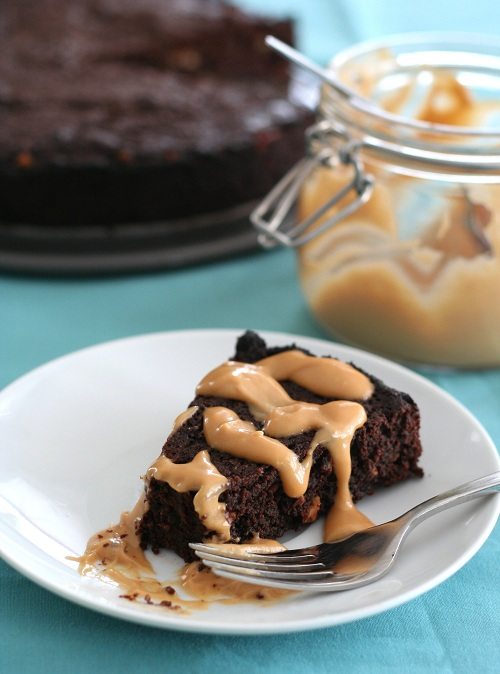 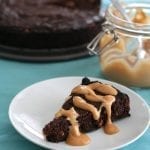