My son is growing like a weed. Almost every time I feed him, he finishes his plate, looks up at me, and says “Can I have some more to eat, I’m still hungry”. Clearly it won’t be long before he’s not looking up at me anymore, but looking down at me and saying the same thing. It shouldn’t come as a surprise, his father is a very tall man (6’7″ to be exact) and a good appetite runs in the family. But I have to confess that I often feel like I am running out of healthy snacks to offer him. After we’ve run the gamut of various fruits and vegetables, I stand there, cupboard open, wondering what I can give the child with the hollow legs so that he will be full enough to go off and play and not pester me for more food.

We go through bananas in this house at an alarming rate, so it’s a rare occasion when I have any overripe ones. In fact, if I want to make banana bread or muffins, I often have to look for the discounted brown ones at the grocery store. I grab them when I see them, and cut them up after I get home to put in the freezer for future baking. This serves a dual purpose, as my husband used the frozen banana chunks in his smoothies when we have no fresh ones. The last time I bought some overripe bananas, I deliberately kept out a few with the intention of baking something on the spot. But I didn’t get around to it right away and one of them disappeared…into a smoothie, if I am not mistaken. 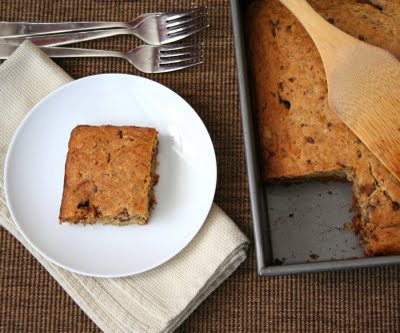 The two remaining ones got very overripe before I finally figured out what I wanted to do with them. Banana bread would have been the obvious choice but I wanted something a little more interesting. I had in my head some sort of banana cake, but preferably one healthy enough to feed my kids for snack or breakfast. I mean, cake for breakfast…what kid doesn’t love that? I also wanted it to contain nuts, both for flavour and for the health benefits. But I had to be stealth about that, since both my older two kids are convinced that they don’t like any nuts besides peanuts. Oh, if they only knew how many cookies and crackers and such I’ve given them that are at least partially, if not entirely, made from nuts! As long as there aren’t chunks of nuts, they never know the difference. 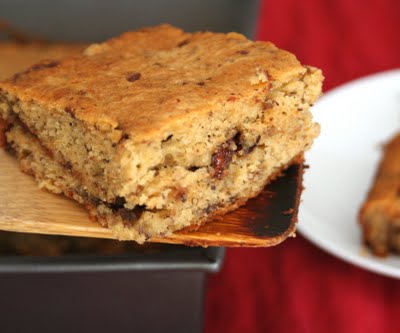 I had some hazelnut flour on hand and it sounded like a good combination with the bananas. I came across THIS recipe and thought it sounded about right. First, I had to translate the metric into emperial – I may have grown up in Canada, where we talk about centimeters and kilometers, but I’ve never used the metric for baking in my entire life! I subbed in whole wheat flour, and changed the proportions to add in more of the flour and more of the hazelnut. I wanted the sweetness to come primarily from the bananas and the chocolate, so I kept sugar to a minimum. I also just used my hazelnut flour as it was, instead of using toasted hazelnuts, out of pure laziness. 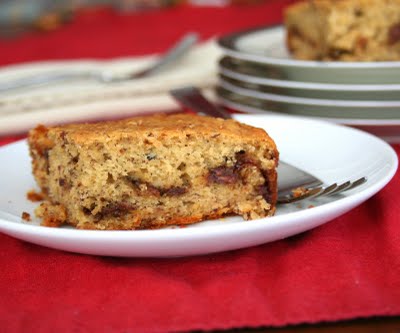 The Results This isn’t really all that different from banana bread in flavour, although it is moister and a little more cake-like in consistency. My kids loved it, all three of them, and I don’t think calling it cake instead of bread hurt the cause! I had a little taste and it was quite good, but I had hoped the hazelnut flavour would come through more. I couldn’t really taste it at all and now wish that I had taken the time to either toast the hazelnut flour lightly or to use whole hazelnuts and toast and grind them. Toasting would have intensified the flavour and made it more apparent in the final product. As it was, this was more just like “banana cake”, rather than “hazelnut banana cake”.

Still, it was a hit with the kids and they enjoyed having it around for breakfast and snacks. It’s a great recipe overall for a healthy, whole wheat banana cake, but if you want the hazelnuts to have more presence, toast them first. Don’t be lazy like me! 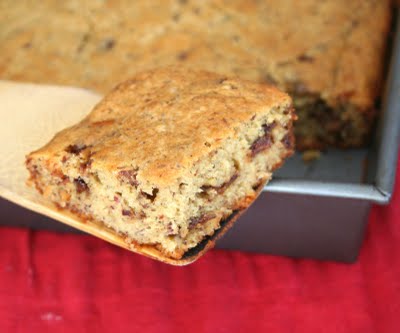 In a medium bowl, whisk together flour, hazelnuts, baking powder, baking soda and salt. Set aside.

In a large bowl, beat butter and brown sugar until light and fluffy. Beat in eggs, one at a time. Beat in sour cream and vanilla or hazelnut extract until thoroughly combined. Beat in bananas.

Beat in flour mixture in two batches, alternating with milk. Stir in chocolate.

Spread batter in prepared pan and bake 30 minutes, or until golden brown and a tester inserted in the center comes out clean. Let cool before serving.