This cheesy keto chicken soup is so thick and creamy. All the best flavors from King Ranch Chicken in a hearty slow cooker soup recipe.

The chilly weather approaches, and you need this King Ranch Chicken Soup recipe in your life. It is so rich and cheesy and creamy, and bursting with spicy Tex-Mex flavors. And so easy to make in your slow cooker!

It’s not quite a “dump-and-run” recipe but it’s close. That’s my own personal term for recipes where you simply pop everything into your crockpot and walk away, and dinner is done. I love those recipes… who doesn’t?

In this recipe, you have the extra step of cooking the garlic in butter and then making in into a thickened soup base. But the results are spectacular so I wouldn’t change a thing!

What is King Ranch Chicken Soup?

You might well be asking yourself what King Ranch Chicken is. I was too, when I started seeing posts for it on Pinterest. From what I could see, it looked like a very tasty, albeit carb-a-licious, chicken casserole.

Upon a little investigation, I found that it is indeed a chicken casserole, and it takes its name from the largest ranch in the US. It’s a Tex-Mex style casserole with tomatoes, cream of mushroom soup, and cream of chicken soup.

I also spotted a number of King Ranch Soup recipes, like this one, and realized that they would be easy, and delicious, to keto-fy.

Most of these soup recipes take quite a bit of flour whisked into the butter, to create a roux. A roux like this helps thicken the broth, but that’s not really an option for keto.

So I used some cream cheese and some glucomannan to thicken the broth, for a super rich, hearty keto chicken soup.

Ta-da! You are now about to enjoy some deliciously spicy Keto King Ranch Chicken Soup.

Can you make this soup in an Instant Pot or on the stove?

This recipe is easily adapted for Instant Pot or stovetop.

For an Instant Pot, I would follow the same process and cook on high for 30 minutes or so. Let the pressure release naturally before opening the lid.

For the stove, I would start with Step 2 in a large saucepan or stockpot. Then I would add the chicken, tomatoes, and jalapeno right into that same pot and cook it that way.

Bring it to a boil, then reduce to a simmer and cook until the chicken is tender, about 30 minutes. Proceed with Step 5 as directed. 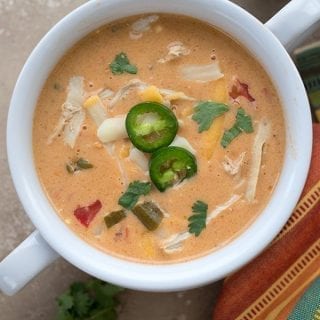